The Story of a Clever Youth and a Foolish One

Long ago there lived a little maid who fell ill. Her father was very rich and he did everything he could for her.

One day she said: “If I only had some fresh figs I’m sure I’d feel better.”

Now it was in the month of January. It would be many long months before the fresh figs would be ripe. The rich man was greatly worried. Not even his fortune could ripen the figs, as he well knew.

Nevertheless he decided to advertise and therefore said: “Whoever shall bring fresh figs to my daughter shall marry her if he be young. If he be old he shall receive his reward in money.”

This announcement was spread abroad throughout the whole country, but no one had any fresh figs in the month of January. At last, however, there was a woman found who had a fig tree close by the side of her house, protected from the cold winds by the house and by the high wall of her garden. This woman had a few fresh figs, but they were small and not very good.

“Send them to the little maid who is sick,” advised her neighbors.

“Indeed I’ll send them as soon as my son can get ready to start,” replied the good woman.

Now the woman had two sons. One of them was foolish, but the other was considered one of the cleverest youths in the whole countryside. He left home immediately with the best of the figs in his basket.

On the way he met a woman dressed in blue with a child in her arms. It was really the Holy Mother and her Child but he did not recognize them.

“What are you carrying in your basket?” asked the woman.

“I am carrying horns,” replied the clever youth.

“Yes, you are carrying horns,” replied the woman.

The young man went on to the rich man’s house supposing that he was carrying figs in his basket just as when he started out. The basket had grown heavy.

“What have you in your basket?” asked the rich man when he saw the youth at his door.

“I have brought some fresh figs from my garden to your daughter who is ill,” replied the clever one.

The rich man was delighted. He opened the basket. Then he shook the boy roughly by the collar and pushed him away down the steep steps. There were horns in the basket.

“What do you mean by playing such a trick on me?” called the rich man after him. “Never let me see your face in these parts again!”

There were still a few of the poorest of the fresh figs remaining on the tree. The foolish son begged his mother for permission to carry them to the little maid who was sick.

“Yes. Go with them,” replied his mother. “Who knows but what you may wed the rich man’s daughter!” She laughed as she said it.

The boy who was foolish started for the rich man’s house with the figs in his basket. They were only a very few, and poor little things indeed.

On the way he met a woman dressed in blue with a child in her arms.

“What are you carrying in your basket?” asked the woman.

“Fresh figs for a little maid who is sick,” replied the boy.

“Yes, you are carrying figs,” said the woman.

The boy opened his basket. “Here, take one for the baby,” he said. “He’s a lovely child.”

He gave one of the best figs to the baby and went on his way to the rich man’s house.

“What have you in your basket?” asked the rich man.

“Fresh figs from my garden for your daughter who is sick,” replied the boy.

The rich man opened the basket with a scowl upon his face. He well remembered how he had been tricked before. Then his eyes grew wide with surprise.

“What, figs like these in January!” he cried in amazement.

The figs had grown large and beautiful on the road to the rich man’s house. They filled the whole basket. The little maid was so happy when she saw them that she began to grow better immediately.

When her father saw that the youth was foolish, he repented of his promise to give his daughter in marriage to any young man who brought fresh figs to her. However, he had given his word and it was not a thing to be lightly broken.

“I’ll tell you what to do to get out of your difficulty,” said his friend to whom he told his trouble. “Turn two lively rabbits out on the mountain and tell the boy that he’ll lose his life if he doesn’t catch them and bring them back at night.”

That is exactly what the rich man did. The poor youth tried in vain to catch the rabbits. He got very tired and hot; and, foolish as he was, he knew enough to realize that the task set for him was quite impossible.

Suddenly he saw the woman dressed in blue standing before him with the child in her arms.

“What is the matter?” she asked him.

The boy told her how he would lose his life if he did not catch the rabbits and bring them back to the rich man at nightfall.

The woman cut a reed and made a pipe of it.

“Play on this pipe,” she said, “and the rabbits will come back to you of their own accord.” 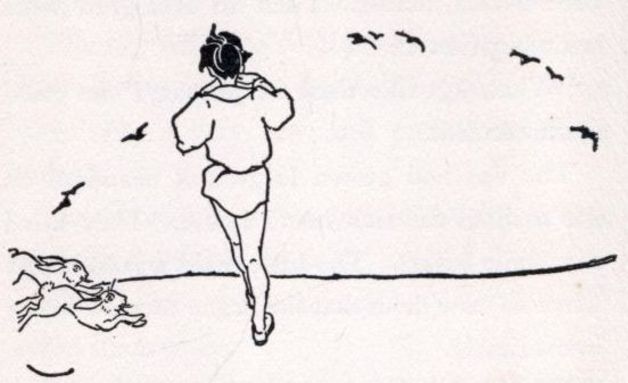 “The two rabbits came running up to him.” Illustration by E.L. Brock, published in The Islands of Magic by Elsie Spicer Eells (1922), Harcourt, Brace, and Company.

The youth played such sweet music on his pipe that the two rabbits came running up to him immediately. It was all he could do to keep away the other beasts and birds. Everything which heard the music was charmed by it.

On his way back to the rich man’s house he met two men who had been sent to kill him. No one had dreamed, of course, that he’d really catch the rabbits. The two men were so surprised when they saw them in the bag that their eyes stuck out. The rich man was even more amazed.

As for the little maid who had been sick, when she heard the sweet music which the youth played upon the pipe, she was quite ready to marry him. The wedding was celebrated with great joy.

Linda Branca and her Mask

Linda Branca and her Mask