Fairytalez.com » The Russian Garland » Iliya of Murom and the Robber Nightingale

In the famous city of Murom there once lived a countryman named Ivan Timofeyevich. Now Ivan had a son named Iliya, the joy of his heart, who was thirty years of age before he could walk; when all at once he acquired such strength that he could not only run about, but made for himself a suit of armour and a steel spear, saddled his steed, and went to his parents and begged their blessing. “Dear father and mother,” said he “grant me permission to go to the famous city of Kiev.” So his parents gave him their blessing and dismissed him, saying: “Go straight to Kiev, straight to the city Chernigov, but do no wrong upon your way, nor shed Christian blood in vain.”

Then Iliya of Murom took leave of his parents, and journeyed on, far into the depths of a dark forest, until he came to a camp of robbers. When the robbers saw him they longed to possess his noble steed, and conspired together to kill Iliya and seize the horse. So they fell upon Iliya of Murom, five-and-twenty men. But Iliya of Murom reined in his steed, drew an arrow from his quiver, laid it on his bow, and shot the shaft deep into the ground till it scattered the earth far and wide over three acres. When the robbers saw this, they were struck dumb with terror, fell on their knees, and said: “Our lord and father, dear good youth, we have done you wrong: in punishment for our crime, take all our treasures and rich dresses, and as many steeds as you desire.” Iliya laughed and said: “What should I do with your treasures? But if you have any regard for your lives, beware in future how you run such risks.” And so saying he journeyed on to the famous city of Kiev.

On his way, Iliya came to the city of Chernigov, which was besieged by a countless Pagan army, threatening to destroy its houses and churches, and to carry off into slavery all the princes and voyevodes. Iliya of Murom was terrified at the sight of such an army; nevertheless, at last he summoned courage, and resolved to die for his religion. So with a brave heart and a stout spear he attacked the unbelieving host, scattered them to the winds, took their leader prisoner, and carried him in triumph to Chernigov. Then the citizens came out to meet him, headed by the governor and nobles, and offered him thanks for their deliverance; whereupon they conducted Iliya to the palace and gave him a grand banquet.

After this, Iliya of Murom followed the straight road to Kiev, which the Robber Nightingale had held for thirty years, and on which he suffered no traveller to pass, on foot or horse; putting them all to death, not with the sword, but with his robber’s whistle. When Iliya came into the open fields, he rode into the Brianski forest, passing over swamps, on bridges of elder, to the river Smarodienka. Then the Robber Nightingale, seeing him approach at a distance, sounded his robber whistle. The hero’s heart quailed not, but when he was within ten versts the Nightingale whistled so loud that Iliya’s steed fell down upon his knees. Then Iliya of Murom went straight up to the nest, which was built upon twelve oaks, and the Robber Nightingale looked forth upon the Russian hero, whistled with all his might, and tried to slay him. But Iliya took his strong bow, and laying an arrow upon it, shot straight into the nest and hit the Robber Nightingale in his right eye; whereupon he fell down from the tree like a sheaf of oats.

Then Iliya of Murom bound the Robber Nightingale fast to his stirrup and rode off to the famous city of Kiev. On the road he passed the palace of the Nightingale, where he saw the daughters of the Robber looking out of the window. “See!” cried the youngest, “here comes riding our father, bringing a peasant bound to his stirrup.” But the eldest daughter eyed Iliya more closely, and fell to weeping bitterly, exclaiming: “Nay, that is not our father, but some strange man, bringing our father prisoner.” Then they called aloud to their husbands, beseeching them to ride out and meet the stranger, and deliver their father. Now their husbands were famous horsemen, and they rode out with their stout lances to meet the Russian rider, and slay him. But the Robber Nightingale, seeing them approach, cried out: “My sons, bring not disgrace upon yourselves, by provoking so brave a rider to slay you; invite him rather to come to our palace and drink a glass of vodka.” 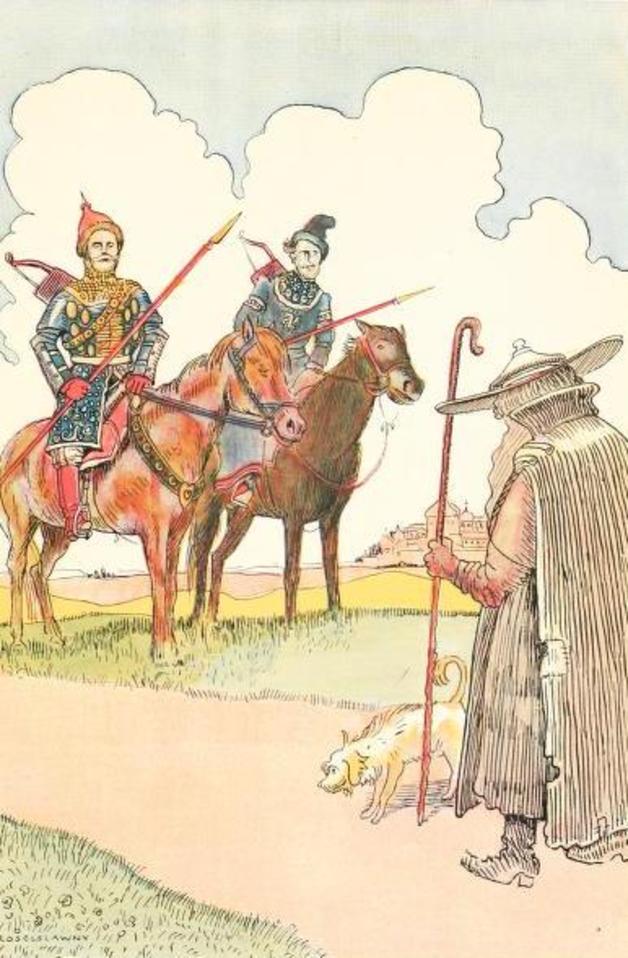 “At length they fell in with a cripple on the road.” Illustration by R. DE. Rosciszewski. Published in The Russian Garland(1916). Robert M. McBride and Company.

At length they fell in with a cripple on the road.

Then Iliya of Murom, at their invitation, turned to go into the palace, little anticipating the danger that awaited him, for the eldest daughter had drawn up by a chain a huge rafter to let fall and slay Iliya as he rode through the gate. But Iliya perceived her design, and slew her with his lance. Thereupon he rode on toward Kiev, and going straight to the palace, prayed to God and saluted the nobles. And the Prince of Kiev said to Iliya, “Tell me, brave youth, what is your name, and whence do you come?” “My lord,” replied Iliya, “my name is Iliyushka, and I was born in the city of Murom.” Then the Prince asked him which way he had come; and Iliya answered: “I rode from Murom to Chernigov, where I slew a countless army of pagans, and delivered the city. Thence I came straight hither, and on my road have captured the mighty Robber Nightingale, and brought him prisoner bound to my stirrup.” But the Prince was wroth, for he thought Iliya was deceiving him. Then two of the knights, Alescha Popovich and Dobrinja Nikitich, rode forth to ascertain the truth of the matter; and when the Prince was convinced, he ordered a glass of vodka to be given to the brave youth, and begged to hear the famous whistle of the Robber Nightingale. So Iliya of Murom took the Prince and Princess under his arm, wrapped in his sable pelisse, and ordered the Robber Nightingale to sound his whistle softly. But the Robber whistled so loud that he stunned all the knights and they fell flat upon the ground, whereat Iliya of Murom was so enraged that he slew him on the spot.

Then Iliya formed a close friendship with Dobrinja Nikitich; and saddling their steeds they rode off, and journeyed on for three months without meeting any enemy. At length they fell in with a cripple on the road; his beggar’s cloak weighed fifty poods, his bonnet nine poods, and his crutch was six feet long. Then Iliya of Murom rode at him to try his courage; but the cripple said: “Ah, Iliya of Murom, do you not remember me, and how we studied together at the same school? And have you now the heart to slay me, a poor helpless cripple? Know you not that a great calamity has befallen the famous city of Kiev? An unbelieving knight, with a head as big as a beer-barrel, eyebrows a span apart, and shoulders six feet broad, has entered it? He devours a whole ox at a time, and drinks off a barrel of beer at a draught. The Prince is lamenting your absence.”

Then Iliya of Murom drew the cripple’s cloak around him, rode off to the city of Kiev, and going straight up to the Prince’s palace, cried aloud, “Ho there, Prince of Kiev! give alms to a poor cripple.” And when the Prince heard this he said: “Come into my palace, and I will give you meat and drink, and money for your journey.” Then Iliya went into the palace, and seated himself near the stove; and close by sat the idolator, who called for food and drink. Thereupon the attendants brought him a whole roasted ox, which he ate up, bones and all; and seven-and-twenty men brought him a barrel of beer, which he emptied at a draught. Then said Iliya of Murom: “My father had once a greedy horse, which ate so much that he burst.” At this the idolator knight fell into a violent rage and exclaimed: “How dare you provoke me with such talk, you miserable cripple? Are you forsooth a match for me? Why, look ye, I could set you on the palm of my hand, and squeeze you like an orange. You had indeed a valiant hero in your country, Iliya of Murom, with whom I would fain wage a battle; but you indeed——!”

“Here stands Iliya of Murom!” exclaimed the cripple; and so saying, he took off his hat, and struck him a blow on the head, which, although not hard, drove it through the wall of the palace. Then Iliya took up the body, and flung it into the courtyard. And the Prince rewarded Iliya richly, and retained him at his court as his boldest and bravest knight.

Story of the Golden Mountain

Prev Story The Renowned Hero, Bova Korolevich and the Princess Drushnevna
Next Story

Story of the Golden Mountain