Jack lived with his parents in a remote part of Canada. He had no brothers or sisters. His parents were very poor, and their only possession was a goat that supplied them with milk. When the boy grew up, he decided to go out into the world and earn something to make his parents more comfortable in their old age. So one day he said, “I am going far away to look for work that you may be able to buy better food.” His parents did not want him to go, for he was their one source of happiness; but he would not listen to their pleading. With no money and something of a heavy heart he went on his way. It was summer in the land, and when he came out of the forest into the open country he saw people in the meadows making hay. Soon he came to a very large farm where a number of men were busy. He asked the man in charge for work. The man said, “How long do you want to work?” Jack answered, “A week.” The man hired him, and he went to work. He was a great worker, and in a week he had done as much as one of the other men could do in a year. The man was pleased with his work.

At the end of the week Jack asked for his wages. The man gave him a little money in part payment, and an old hen for the other part. Jack was very cross. He said, “I don’t want a hen; I want money. Little good an old hen can do me!” But the man would not give him more money. He said, “The hen will lay eggs for you. She will lay two dozen eggs a day—an egg every hour.” So Jack with much disgust took the old hen, for he could do no better, and went home. His parents were glad to see him again, and to get the money he had earned; but they laughed at his old hen. But at the end of a day, when she had laid two dozen eggs, they were well pleased.

In a week Jack said, “I am going away again to earn more money.” This time his parents were not troubled. They knew he could take care of himself. He said, “I will take the old hen with me and sell her for a great price.” So one morning he set out. He went through the forest with his old hen under his arm. He passed again by the meadows where men and women were making hay, but he did not ask for work. As he passed, the people looked at his hen and laughed, but he went along unheeding. He soon came to the town where the Seigneur lived, and he went to a house where he got food and lodging for himself and his old hen. He left the hen there and went to the Seigneur’s house. He told the Seigneur that he had a wonderful bird, and offered to sell her to him. “Go and bring me the bird,” said the Seigneur. But when Jack brought the old hen to him the Seigneur was very angry. “Little good an old hen like that will do me,” he said. But when Jack told him that she could lay twenty-four eggs a day, he said, “If that is true you may have your price. We will keep her for a day and test your word.” So they locked the old hen up for a day. At the end of that time she had laid twenty-four eggs, and the Seigneur wondered greatly. He said, “How much do you want for your hen?” Jack answered, “Whatever you wish to pay me.” The Seigneur gave him much money, and Jack, well pleased with his bargain, went home. His parents were glad to have him back, and to get the money he had got for the old hen. They began to live very comfortably.

At the end of a few weeks Jack decided to go away again. He said, “Let me take the old goat and sell her. We can do without her milk.” He thought that since he had sold the hen so well, he could make a good sale of the goat. His parents agreed to his wishes. So one morning he tied ribbons and flowers around the old goat’s head and covered her with a many-coloured blanket, and set out, leading her behind him. He went along through the forest. It was harvest time, and he passed great farms where reapers were busy cutting yellow grain. But he did not ask for work. The people all looked with wonder at his goat as he passed, but he spoke to no one. Soon he came to the town where the Seigneur lived. He brought his goat to the Seigneur and offered to sell her to him, and the Seigneur gave him much money for her. Then she was placed in a yard with the Seigneur’s other animals. The yard was always guarded by two keepers. 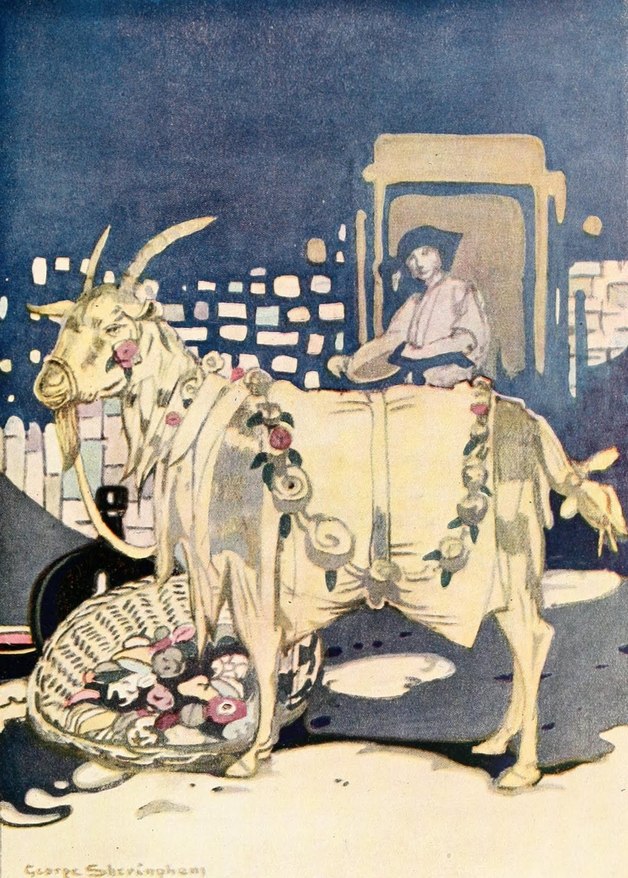 “So he bought a large quantity of food, put it in a basket, and carried it to the animal yard.” Illustration by George Sheringham. Published in Canadian Wonder Tales (1918), John Lane Company.

Jack decided not to go home at once. He planned to steal the goat back and take her home. Then he would have the goat and much money too. So he bought a large quantity of food, put it in a basket, and carried it to the animal yard. When the two keepers saw him coming, they ran to him to send him away, for no one else was allowed at night near the yard. But Jack said, “The night is long and cool. The Seigneur sent me to you with this basket of food.” The keepers were well pleased with the food, and they sat down and had a good meal. They ate until they were full. Jack said, “If you want to sleep for an hour, I will watch. I like to sit in the moonlight.” The harvest moon was full, and the night was as bright as day. The two keepers thanked Jack for his kindness, and lay down on some straw, and were soon fast asleep because of their hearty meal. Jack waited until they were sound asleep. Then he took the old goat and walked quietly away, leading her behind him. The town was all asleep. There was not a sound anywhere. Soon he reached the open country without meeting anyone, and passed by rich harvest fields until he came to the forest. Then he followed the forest path in the bright moonlight, and reached his home before morning. His parents were glad to see him again so soon and to get his money. But when he told them that he had sold the old goat and stolen her back they were very angry, and his father said, “No good can come of it. The old goat will bring you to a sad end.”

After a few days Jack decided to set out again to seek his fortune. He took the stolen goat with him. Before he was out of the forest he came upon a man camped in a green place under the trees. The man asked him who he was. Jack said, “I am a servant of the Seigneur. I take care of his beautiful goats. He gave me this one for myself.” The man liked the goat very much, and asked Jack what he would take for her. But Jack said he would not sell her. Then Jack asked him who he was. The man said, “I am a robber. If you will come with me, we will soon be very rich.” So Jack agreed to join him. They went along together for some days. But the robber always had his eye on the goat. One night as they slept on the bank of a stream, the robber killed Jack with a blow and threw his body into the river. He wanted his goat. Then he took the old goat and went on his way. Poor Jack’s stolen goat had brought him to a sad end.

Prev Story The Mermaid of the Magdalenes
Next Story