Fairytalez.com » Elsie Spicer Eells » Why the Lamb is Meek

Once upon a time, there was a little lamb frisking gaily about the pasture. The bright sunshine and the soft breezes made him very happy. He had just finished a hearty meal and that made him happy too. He was the very happiest little lamb in all the world and he thought that he was the most wonderful little lamb. 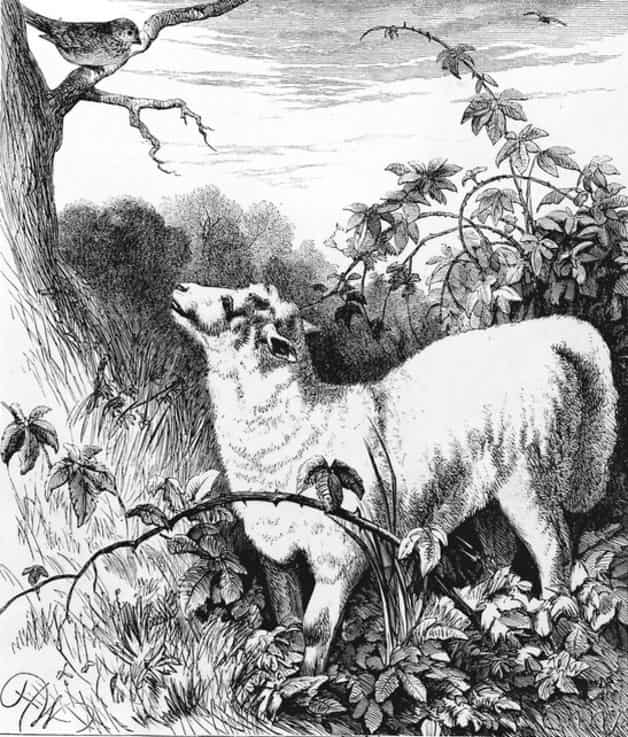 A big toad sat on the ground and watched him. After a while the toad said: “O, little lamb, how are you feeling today?”

The lamb replied that he had never felt better in all his life.

“Even though you are feeling very strong, I can pull you into the sea,” said the toad.

The little lamb laughed and laughed until he rolled over on the ground.

“Just take hold of this rope and I’ll show you how easy it is to pull you into the sea,” said the toad.

The lamb took hold of the rope. Then the toad said, “Please wait a minute while I get a good long distance away from you. I can pull better when I’m not too near you.”

The lamb waited and the toad hopped down to the sea. He hopped up into a tree which hung over the water’s edge and from there he hopped on to the whale’s back. He fastened the end of the rope around the whale and then he called out to the lamb: “All ready. Now we’ll see how hard you can pull.”

When the whale felt the lamb pulling at the rope, he swam away from the shore. No matter how hard the lamb pulled or how much force he exerted it did not do one bit of good. He was dragged down to the water’s edge as easily as could be.

“I give up,” said the lamb as he reached the water’s edge.

After that, although the sunshine was just as bright as ever, any one who watched that little lamb could see that he was a little more meek.

One day, not long afterwards, the sunshine was again very bright and the little lamb was again feeling frisky. He was so happy and gay that he had forgotten all about how the toad had pulled him down to the water until the toad spoke to him. Then he remembered.

“O, little lamb, how are you feeling today?” asked the toad. The little lamb replied that he was very well.

“You may be strong enough to pull me into the sea,” said the lamb, “but surely I can run faster than you. I’ve watched you hopping about my pasture. You can’t run fast at all. However, I’ll gladly run a race with you to prove what I say.”

The toad set a goal and told the lamb to call out every little while during the race so he could see how much farther ahead the lamb was. Then the toad and the lamb started.

The toad had assembled all his brothers and his sisters and his cousins and his uncles and his aunts before the race and had stationed them at various points along the path of the race. He had told them that whenever any of them should hear the lamb calling out, “Laculay, laculay, laculay,” the toad which was nearest should answer, “Gulugubango, bango lay.”

The lamb ran and ran as fast as he could. Then he remembered his promise and called out, “Laculay, laculay, laculay.” He expected to hear the toad answer from a long, long distance behind him. He was much surprised to hear some one near him answer, “Gulugubango, bango lay.” After that he ran faster than ever.

After running on for some distance farther the lamb again called out, “Laculay, laculay, laculay.” Again he heard the answer at only a short distance away, “Gulugubango, bango lay.” He ran and ran until his little heart was beating so fast that it seemed as if it would burst. At last he arrived at the goal of the race which the toad had set and there sat the toad’s brother who looked so much like him that the lamb couldn’t tell them apart. The lamb went back to his pasture very meekly and quietly. He acknowledged that he had been beaten in the race.

The next morning the toad said to him, “Even though you did not run fast enough to win the race, still you are a very fast runner. I have told the daughter of the king about you and I have said to her that some day she shall see me riding on your back with a bridle in your mouth as if you were my horse.”

The lamb was very angry. “Perhaps you are strong enough to pull me into the sea, and perhaps you can beat me when we run a race,” said the lamb, “but never, never in the world will I be your horse.”

Time passed and the sunshine was very bright and the soft, gentle breezes were very sweet. The lamb was so happy again that he forgot all about how the toad had pulled him into the sea, and how the toad had beaten him at running the race. He was very sorry for the toad when he saw him all humped up in a disconsolate little heap one day. “O, poor toad, are you sick?” he asked. “Isn’t there something I can do to help you?”

The toad told him how very sick he was. “There is something you could do to help me,” he said, “but I don’t believe that you are quite strong enough or can travel quite fast enough.”

The lamb took a deep breath and blew out his chest. “I’ll show you,” he said. “Just tell me what it is.”

The toad replied that he had promised to be at a party that afternoon at the house of the king’s daughter and he did not see how he could possibly get there unless some one would carry him.

The toad shook about on the lamb’s back after they had started so that it seemed as if he would surely fall off. After a little he said, “I can not possibly stand riding like this. It jars all my sore spots. I’ll have to get off.” He tried it a little while longer and shook about worse than ever. Then he said, “Do you know, I think I could endure this painful ride a little better if only I had something to hold myself by? Do you mind if I take a piece of grass and put it in your mouth? I can hold on to that when I shake about and my sore spots will not hurt so much.”

The lamb let the toad put a piece of grass in his mouth.

At last the lamb and the toad drew near to the palace of the king. The king’s daughter was leaning out of the window watching for them. The toad dug his feet into the lamb’s sides, pulled hard on the piece of the grass in the lamb’s mouth and waved the little stick about over the lamb’s head. “Go on, horse,” he said and the king’s daughter heard him. She laughed and laughed, and when all the rest of the people in the palace saw the toad arriving mounted on the lamb’s back and driving him like a horse they laughed too. The lamb went meekly home to his pasture and from that day to this when one wishes to speak of meekness one says “as meek as a lamb.”

How the Tiger Got His Stripes

How the Tiger Got His Stripes