Fairytalez.com » Asbjørnsen & Moe » The Lassie and her Grandmother

Once on a time a poor couple lived far, far away in a great wood. The wife was brought to bed, and had a pretty girl, but they were so poor they did not know how to get the babe christened, for they had no money to pay the parson’s fees.

So one day the father went out to see if he could find any one who was willing to stand for the child and pay the fees; but though he walked about the whole day from one house to another, and though all said they were willing enough to stand, no one thought himself bound to pay the fees. Now, when he was going home again, a lovely lady met him, dressed so fine, and she looked so thoroughly good and kind; she offered to get the babe christened, but after that, she said, she must keep it for her own. The husband answered, he must first ask his wife what she wished to do; but when he got home and told his story, the wife said, right out, “No!”

Next day the man went out again, but no one would stand if they had to pay the fees; and though he begged and prayed, he could get no help. And again as he went home, towards evening the same lovely lady met him, who looked so sweet and good, and she made him the same offer. So he told his wife again how he had fared, and this time she said, if he couldn’t get any one to stand for his babe next day, they must just let the lady have her way, since she seemed so kind and good.

The third day, the man went about, but he couldn’t get any one to stand; and so when, towards evening, he met the kind lady again, he gave his word she should have the babe if she would only get it christened at the font. So next morning she came to the place where the man lived, followed by two men to stand godfathers, took the babe and carried it to church, and there it was christened. After that she took it to her own house, and there the little girl lived with her several years, and her Foster-mother was always kind and friendly to her.

Now, when the Lassie had grown to be big enough to know right and wrong, her Foster-mother got ready to go on a journey.

“You have my leave,” she said, “to go all over the house, except those rooms which I shew you;” and when she had said that, away she went.

But the Lassie could not forbear just to open one of the doors a little bit, when—Pop! out flew a Star.

When her Foster-mother came back, she was very vexed to find that the star had flown out, and she got very angry with her Foster-daughter, and threatened to send her away; but the child cried and begged so hard that she got leave to stay.

Now, after a while, the Foster-mother had to go on another journey; and, before she went, she forbade the Lassie to go into those two rooms into which she had never been. She promised to beware; but when she was left alone, she began to think and to wonder what there could be in the second room, and at last she could not help setting the door a little ajar, just to peep in, when—Pop! out flew the Moon.

When her Foster-mother came home and found the moon let out, she was very downcast, and said to the Lassie she must go away, she could not stay with her any longer. But the Lassie wept so bitterly, and prayed so heartily for forgiveness, that this time, too, she got leave to stay.

Some time after, the Foster-mother had to go away again, and she charged the Lassie, who by this time was half grown up, most earnestly that she mustn’t try to go into, or to peep into, the third room. But when her Foster-mother had been gone some time, and the Lassie was weary of walking about alone, all at once she thought, “Dear me, what fun it would be just to peep a little into that third room.” Then she thought she mustn’t do it for her Foster-mother’s sake; but when the bad thought came the second time she could hold out no longer; come what might, she must and would look into the room; so she just opened the door a tiny bit, when—POP! out flew the Sun.

But when her Foster-mother came back and saw that the sun had flown away, she was cut to the heart, and said, “Now, there was no help for it, the Lassie must and should go away; she couldn’t hear of her staying any longer.” Now the Lassie cried her eyes out, and begged and prayed so prettily; but it was all no good.

“Nay! but I must punish you!” said her Foster-mother; “but you may have your choice, either to be the loveliest woman in the world, and not to be able to speak, or to keep your speech, and to be the ugliest of all women; but away from me you must go.”

And the Lassie said, “I would sooner be lovely.” So she became all at once wondrous fair; but from that day forth she was dumb.

So, when she went away from her Foster-mother, she walked and wandered through a great, great wood; but the farther she went, the farther off the end seemed to be. So, when the evening came on, she clomb up into a tall tree, which grew over a spring, and there she made herself up to sleep that night. Close by lay a castle, and from that castle came early every morning a maid to draw water to make the Prince’s tea, from the spring over which the Lassie was sitting. So the maid looked down into the spring, saw the lovely face in the water, and thought it was her own; then she flung away the pitcher, and ran home; and, when she got there, she tossed up her head and said, “If I’m so pretty, I’m far too good to go and fetch water.”

So another maid had to go for the water, but the same thing happened to her; she went back and said she was far too pretty and too good to fetch water from the spring for the Prince. Then the Prince went himself, for he had a mind to see what all this could mean. So, when he reached the spring, he too saw the image in the water; but he looked up at once, and became aware of the lovely Lassie who sat there up in the tree. Then he coaxed her down and took her home; and at last made up his mind to have her for his queen, because she was so lovely; but his mother, who was still alive, was against it. 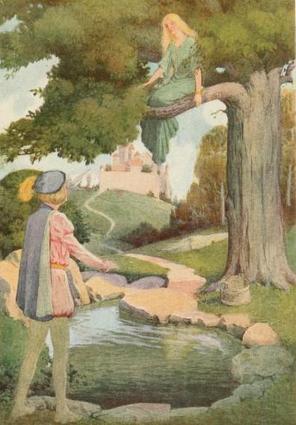 “And so he saw the lovely maiden who was seated among its branches.” Illustration by George W. Hood. Published in The Norwegian Fairy Book. 1922. Frederick A. Stokes and Company.

But the Prince could not be content till he got her. So after they had lived together a while, the Lassie was to have a child, and when the child came to be born, the Prince set a strong watch about her; but at the birth one and all fell into a deep sleep, and her Foster-mother came, cut the babe on its little finger, and smeared the queen’s mouth with the blood; and said:

“Now you shall be as grieved as I was when you let out the star;” and with these words she carried off the babe.

But when those who were on the watch woke, they thought the queen had eaten her own child, and the old queen was all for burning her alive, but the Prince was so fond of her that at last he begged her off, but he had hard work to set her free.

So the next time the young queen was to have a child, twice as strong a watch was set as the first time, but the same thing happened over again, only this time her Foster-mother said:

“Now you shall be as grieved as I was when you let the moon out.”

And the queen begged and prayed, and wept; for when her Foster-mother was there, she could speak—but it was all no good.

And now the old queen said she must be burnt, but the Prince found means to beg her off. But when the third child was to be born, a watch was set three times as strong as the first, but just the same thing happened. Her Foster-mother came while the watch slept, took the babe, and cut its little finger, and smeared the queen’s mouth with the blood, telling her now she should be as grieved as she had been when the Lassie let out the sun.

And now the Prince could not save her any longer. She must and should be burnt. But just as they were leading her to the stake, all at once they saw her Foster-mother, who came with all three children—two she led by the hand, and the third she had on her arm; and so she went up to the young queen and said:

How glad the Queen and Prince now were, all may easily think, but no one can tell. After that they were always happy; and from that day even the Prince’s mother was very fond of the young queen.