There was once a man and his wife who were very, very poor, and had a great many children. Each year added one to the number. One day the wife gave birth to a beautiful boy, who, on opening his eyes, cried:

“Dearest mother, give me some of my brother’s old clothes, and food for two days, and I will go into the world and seek my fortune, for I see you have enough children here without me.”

“Heaven forbid, my child!” exclaimed the mother. “You are much too young to leave the house.”

But the little one insisted; so at length his mother gave him some clothes and some food, and he departed, full of joy. Lillekort (for so he named himself) travelled towards the east. Presently he met an old, one-eyed woman, and took away her eye.

“What will you give me for your eye?” asked Lillekort.

“A sword that will slay a whole army, no matter how numerous.”

Lillekort took the sword and continued his journey. A little farther on he met another old, one-eyed woman, took away her eye, and asked what she would give him for returning it.

The old woman said she would give him a ship that would sail over land and sea, over mountains and valleys, and on his agreeing, she gave him a little ship so small and light that he could carry it about in his pocket.

As soon as he was quite alone Lillekort stopped to examine his little vessel. He drew it from his pocket and put one foot in it. Immediately it grew larger. He put in the second foot. It grew yet larger. He sat down in it. It increased yet more. Then he said:

“Go over the waves of the ocean, over mountains and through valleys, until you reach the palace of the King.”

The ship immediately sped through space with the rapidity of a bird, and stopped in front of a magnificent palace. From one of the windows of this palace several persons beheld, with astonishment and interest, this boy who travelled in a manner so strange, and they hastened out to obtain a nearer view of the wonder. But Lillekort had already put his ship in his pocket. They asked who he was and whence he came. To these different questions he knew not how to reply; but in a firm voice said he wished to enter the service of the King, no matter in what capacity; if need be, as a servant of the servants.

His humble request was granted. He was ordered to fetch wood and water for the kitchen. Arriving at the palace he saw with surprise that all the walls were hung with black, both without and within.

“Wherefore,” he asked the cook, “this appearance of mourning?”

“Alas!” she replied, “the only daughter of our King has been promised to three trolls, enormous ogres, and Thursday next the first comes to claim her. A knight, whose name is Rend, has undertaken to defend her. But how should he succeed? In the meantime we are all plunged in anguish and affliction.”

Thursday evening Rend led the Princess to the sea-shore. It was here he had to defend her. But he was not very brave, so instead of waiting near her he climbed a tree and hid among the branches. In vain the Princess begged him to assist her.

At that moment Lillekort asked the cook’s permission to go to the sea-shore.

“Go,” said she, “but be sure you return by the time I prepare supper, and do not forget to bring me a good load of wood.”

Lillekort promised, and ran toward the beach. At the same time the troll appeared, making a noise like thunder. His body was of enormous dimensions and he had five frightful heads.

“Madman!” he cried, on seeing the little kitchen-boy.

“Do you know how to fight?”

The troll then threw a bar of iron at Lillekort, which, falling on the ground, raised a pile of sand and dust.

“A beautiful tower of strength,” cried Lillekort. “Now, see mine.”

With these words he drew his sword, and with one blow smote off the monster’s five heads.

Finding herself delivered, the Princess began to dance and sing gaily, then she said to the young boy: “Rest, lay your head on my knees.”

Whilst he thus rested she placed on him a suit of golden armour.

All danger being over, Rend came down from the tree, took the tongues and lungs of the monster, and then told the Princess he would kill her unless she promised to acknowledge him publicly as her deliverer. She yielded to his threats, and he returned with her in triumph to the palace. The King loaded him with honours, and at supper seated him at his right hand. Meanwhile, Lillekort entered the giant’s ship, and brought from thence a quantity of gold and silver trinkets.

“From whence all these riches?” asked the cook anxiously, for she feared he had stolen them.

“Reassure yourself,” he replied. “I went home for a moment; these trinkets fell from an old piece of furniture, so I brought them back for you.”

“What beautiful things! A thousand thanks!”

The Thursday following, fresh grief, fresh anguish. However, Rend said as he had vanquished the first troll, he reckoned he could conquer the second. But this time also he took refuge among the branches of a tree, saying: “Why two victims? One is surely sufficient.”

Lillekort again obtained the cook’s permission to go out, he said to play with some children on the sea-shore; so he hastened forth, after promising to return by the time she prepared supper, and bring a good load of wood.

As he reached the shore he saw the troll approaching. He was twice as colossal as the first, and had ten heads.

“Madman!” repeated the valiant boy, and on the troll asking if he could fight, replied, as on the former occasion, that he could learn.

The giant then threw a bar of iron at him, which, falling on the ground, raised a column of dust thirty feet high.

“A beautiful tower of strength,” said the boy. “Now, see mine.” And drawing his sword, he, with one blow, smote off the monster’s ten heads.

Again the Princess desired him to rest his head on her knees, and this time she placed on him a suit of silver armour.

Rend now came down from the tree, took the tongues and lungs of the troll, and returned with the Princess in triumph to the palace, after having declared he would kill her if she did not acknowledge him publicly as her deliverer. The King received him with enthusiasm, and knew not how to show his gratitude.

Lillekort returned to the kitchen, carrying a quantity of gold and silver he had taken from the troll’s ship.

The third Thursday, the palace was again hung with black, and the people were plunged in grief. But Rend said he had already conquered two formidable monsters and would overcome the third. But, as on the preceding Thursdays, he hid in the tree, and when the Princess implored him to remain with her, said one victim was sufficient. 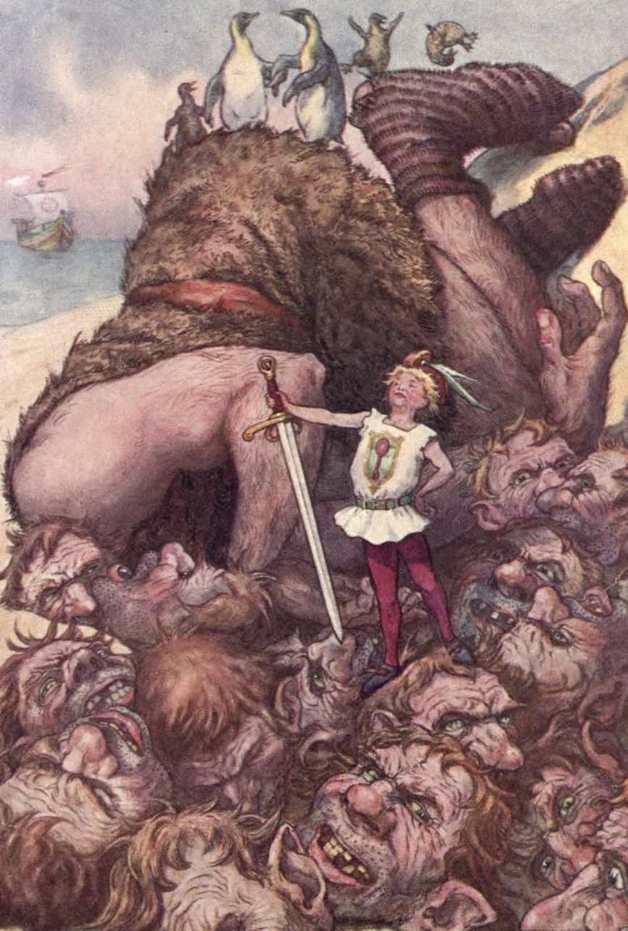 “Lillekort with his magic sword struck off the fifteen heads at one blow.” Illustration by Frank Papé, published in The Diamond Fairy Book, Hazell, Watson and Viney, LD

Lillekort, who had again obtained the cook’s permission to go out, reached the shore at the same time as the monster, who was much more terrible than either of the two former. He had fifteen heads, and the bar of iron he threw at his brave little adversary raised a column of earth forty feet high. Lillekort, however, with his magic sword, struck off the fifteen heads at one blow.

“Rest,” said the Princess; “rest your head on my knees.”

Whilst he thus rested, she put on him a suit of bronze armour, and said:

“How can we make it known that it is you who saved me?”

“Listen,” replied Lillekort, “this is my idea. Rend will go without scruple to claim the reward promised to your deliverer: your hand and the half of your father’s kingdom. When the day for your marriage arrives say you wish to be served at table by the boy who carries wood and water to the kitchen. I will let a few drops of wine fall on Rend’s plate. He will strike me. A second and a third time I will do the same, and again he will strike me; then you shall say: ‘For shame to strike him whom I love—he who saved me—he whom I should wed!'”

Seeing the troll was dead, Rend came down from the tree and led the Princess back to the palace, after having made her swear a third time to proclaim him as her deliverer.

The King announced that his daughter’s deliverer should receive in the most splendid manner the reward he had so well deserved. The cowardly knight was betrothed to the Princess, and half the kingdom was given him. The day of the Princess’s marriage she would be served by the boy who carried wood and water to the kitchen.”What!” exclaimed Rend, in disgust, “you wish that dirty, hideous little varlet to come near you?”

Lillekort was summoned, and, as he had said, he once, twice, thrice let some drops of wine fall in Rend’s plate.

The first time he was struck the coarse garments he wore fell off, and the valiant boy appeared in a suit of bronze armour, the second time in silver armour, and the third time in armour of glittering gold.

Then the Princess cried: “For shame to strike him whom I love—he who saved me—he whom I should wed!”

Rend swore loudly that it was he who had saved her.

“Let us see the proofs of the victors,” said the King.

The knight immediately showed the tongues and lungs of the trolls.

Lillekort fetched the treasures he had taken from the monsters’ ships. At the sight of the gold, silver, and diamonds, no one had the slightest doubt.

“The trolls alone have such treasures,” said the King, “and only he who kills them can obtain possession of their riches.”

Rend, the coward and impostor, was thrown into a ditch full of serpents, and the Princess’s hand was given to Lillekort, together with half of the kingdom.