There was once an old man and an old woman. The old woman had a hen and the old man had a rooster; the old woman’s hen laid two eggs a day and she ate a great many, but she would not give the old man a single one. One day the old man lost patience and said: “Listen, old crony, you live as if you were in clover, give me a couple of eggs so that I can at least have a taste of them.”

“No indeed!” replied the old woman, who was very avaricious. “If you want eggs, beat your rooster that he may lay eggs for you, and then eat them; I flogged my hen, and just see how she lays now.” 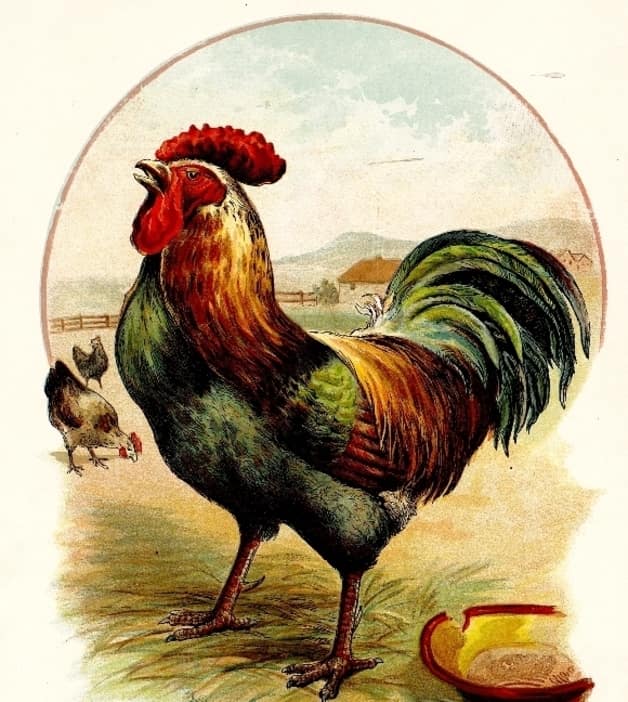 “The rooster.” Illustration by unknown artist, published in Feet and Wings (1890), McLoughlin Bros.

The old man, being stingy and greedy, listened to the old woman’s talk, angrily seized his rooster, gave him a sound thrashing and said:

“There, now, lay some eggs for me or else go out of the house, I won’t feed you for nothing any longer.”

As soon as the rooster escaped from the old man’s hands it ran off down the high-road. While thus pursuing its way, lo and behold! it found a little purse with two half-pennies. Taking it in its beak, the bird turned and went back toward the old man’s house. On the road it met a carriage containing a gentleman and several ladies. The gentleman looked at the rooster, saw a purse in its bill, and said to the driver:

“Get down and see what this rooster has in its beak.”

The driver hastily jumped from his box, took the little purse from the rooster’s bill, and gave it to his master. The gentleman put it in his pocket and drove on. The rooster was very angry and ran after the carriage, repeating continually:

The enraged gentleman said to the coachman as they passed a well:

“Take that impudent rooster and throw it into the well.”

The driver got down from his box again, seized the rooster, and flung it down the well. When the rooster saw that its life was in such great danger, what was it to do?

It began to swallow the water, and drank and drank till it had swallowed all the water in the well. Then it flew out and again ran after the carriage, calling:

When the gentleman saw this, he was perfectly amazed and said:

“Hoho! This rooster is a perfect imp of Satan! Never mind! I’ll wring your neck, you saucy cockerel!” When he reached home he told the cook to take the rooster, throw it on the coals burning upon the hearth, and push a big stone in front of the opening in the chimney. The old woman did what her master bade her.

When the rooster saw this new injustice, it began to spit out the water it had swallowed till it had poured all the water from the well upon the burning coals. This put out the fire, cooled the hearth, and made such a flood on the kitchen floor that the cook fainted away from pure rage. Then the rooster gave the stone a push, came out safe and sound, ran to the gentleman’s window, and began to knock on the panes with its bill, screaming:

“Heaven knows that I’ve got a torment in this monster of a rooster,” said the gentleman. “Driver, rid me of it, toss it into the middle of the herds of cows and oxen; perhaps some bull will stick its horns through it and relieve us.” The coachman seized the rooster and flung it among the herds. You ought to have seen the rooster’s delight. It swallowed bulls, oxen, cows, and calves, till it had devoured the whole herd and its stomach had grown as big as a mountain. Then it went to the window again, spread out its wings before the sun so that it darkened the gentleman’s room, and once more began:

When the gentleman saw this he was ready to burst with rage and did not know what to do to get rid of the rooster. He stood thinking till at last an idea entered his head:

“I’ll lock it up in the treasure-chamber. Perhaps if it tries to swallow the ducats one will stick in its throat, and I shall get rid of the bird.” No sooner said than done. He grasped the rooster and flung it into the treasure-chamber. The rooster swallowed all the money and left the chests empty. Then it escaped from the room, went to the gentleman’s window, and again began:

As the gentleman saw that there was nothing else to be done he tossed the purse out. The rooster picked it up, went about its own business, and left the gentleman in peace. All the poultry ran after the rooster so that it really looked like a wedding; but the gentleman turned green with rage as he watched, and said sighing:

“Let them all run off to the last chick, I’m glad to be rid of the torment; there was witchcraft in that rooster!”

But the puffed-up rooster stalked proudly along, followed by all the fowls, and went merrily on and on till he reached the old man’s house and began to crow: “Kikeriki!”

When the old man heard the rooster’s voice he ran out joyfully to meet the bird, but looking through the door what did he see? His rooster had become a terrible object. An elephant beside it would have seemed like a flea; and following behind came countless flocks of birds, each one more beautiful and brilliant than the other. When the old man saw the rooster so huge and fat, he opened the gate for it. “Master,” said the bird, “spread a sheet here in the middle of the yard.”

The old man, as nimble as a top, laid down the sheet. The rooster took its stand upon it, spread its wings, and instantly the whole yard was filled with birds and herds of cattle, but it shook out on the sheet a pile of ducats that flashed in the sun till they dazzled the eyes. When the old man beheld this vast treasure he did not know what to do in his delight, and hugged and kissed the rooster.

But all at once the old woman appeared from somewhere, and when she saw this marvelous spectacle her eyes glittered in her head, and she was ready to burst with wrath.

“Pine away with longing for them, old woman; when I begged you for some eggs, you know what you answered. Now flog your hen, that it may bring you ducats. I beat my rooster, and you see what it has fetched me.”

The old woman went to the hen-coop, shook the hen, took it by the tail, and gave it such a drubbing that it was enough to make one weep for pity. When the poor hen escaped from the old woman’s hands it fled to the highway. While walking along it found a bead, swallowed it, hurried back home as fast as possible, and began to cackle at the gate. The old woman welcomed it joyfully. The hen ran quickly in at the gate, passed its mistress, and went to its nest—at the end of an hour it jumped off, cackling loudly. The old woman hastened to see what the hen had laid. But when she glanced into the nest what did she perceive? A little glass bead. The hen had laid a glass bead! When the old woman saw that the hen had fooled her, she began to beat it, and beat till she flogged it to death. So the stupid old soul remained as poor as a church-mouse. From that time she might live on roast nothing and golden wait a while, instead of eggs, for she had abused and killed the poor hen, though it was not at all to blame.

But the old man was very rich; he built great houses, laid out beautiful gardens, and lived luxuriously. He made the old woman his poultry-maid, the rooster he took about with him everywhere, dressed in a gold collar, yellow boots, and spurs on its heels, so that one might have thought it was one of the Three Kings from the Christmas play instead of a mere ordinary rooster.

The Rose and the Amaranth

The Rose and the Amaranth