Once upon a time there was a man who was not rich, but by dint of hard work he had saved up a little sum. Every day when he went to his work, he said to his wife, —

“Take care of this money. It is for the long time.”

The woman, as soon as he was gone, would take pleasure in counting over the crowns and the sous. One day when she was alone in her house, counting her money as usual, a beggar came by and asked her for charity.

“What!” said he, “and all those beautiful crowns and those sous that you have there! Could you not give me some of those for charity?”

“I wish I could,” said the woman, “but we are keeping this for the long time.”

“Ah! if you are the long time, that is another thing. Take some, take some.”

The beggar, not at all ashamed, pocketed the whole sum, leaving not a farthing or a mite, and went away satisfied with his windfall, as you may imagine.

The husband returned. “Long Time came,” said the wife, “and I gave him the money that we saved for him.”

“Yes; a poor man who told me that he was Long Time. I have given him all.”

“Ah! poor dunce! you let him steal the savings from you. Come, there is nothing left for us to do, but take a wallet and go out ourselves and beg from village to village. Take your clothes and let us go forth.”

The husband had nothing but what he had on, the wife not much more. He went in front, she followed. 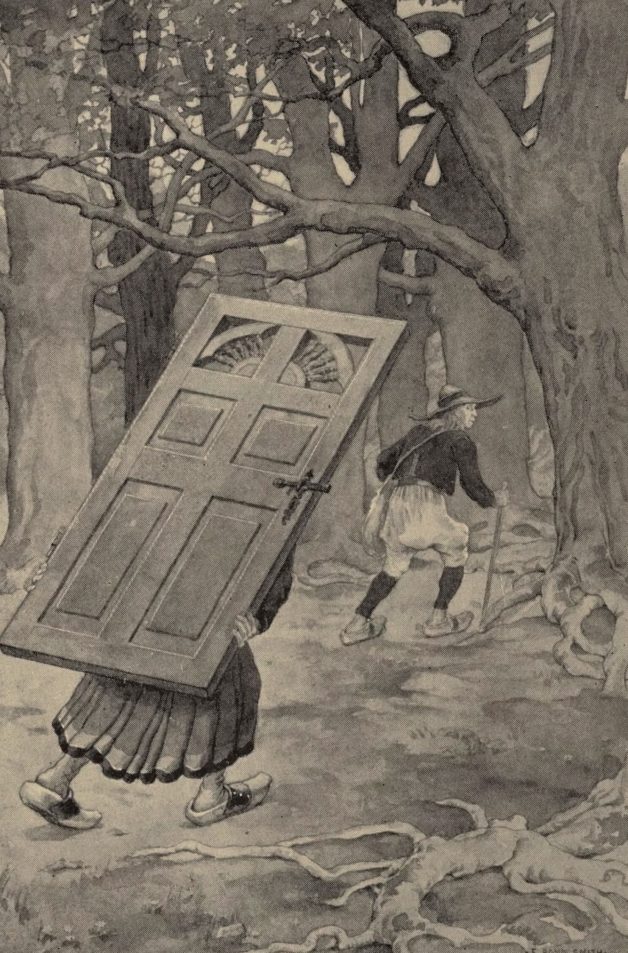 The obedient wife took the door off the hinges, put it on her shoulders, and followed her husband towards the neighboring wood.

Night came on. They heard the noise of a band of robbers, who were coming in their direction. “Let us climb up into a tree to hide,” said the husband.

“What shall I do with the door?” asked his wife.

“The door? Leave it there.”

She climbed up after her husband into a large old spreading oak-tree, dragging the door after her. They were scarcely settled in the branches when the robbers arrived at the foot of the tree, made a halt, opened their provisions, lighted a fire, prepared their supper, counted the booty they had taken during the day, and then began to eat and drink.

The wife, from the top branch, said in a low voice to her husband, —

“The door is going to fall!”

“Hold on to it, you miserable baggage, or we are lost.”

The woman let go the door, which tumbled with a great crash from branch to branch, and fell into the midst of the robbers and frightened them so that they ran away as fast as they could, for- getting all their plunder and never looking be- hind them.

The husband and wife came down, picked up the jewels, the pieces of gold, and all the booty left by the robbers, and returned to their house, rich for the rest of their lives.