Fairytalez.com » Edith Howes » On the Moon

When Shining-Eyes threw the Fire-that-never- goes-out into the sky it was only a flaming stick, but it grew rounder and wider and cooler, until at last it became a great Moon-land. It was a wonderland place. Everything gave out a golden light — mountains and lakes, rocks and trees and flowers, and even the walls and spires of a beautiful moon-palace that Marama had built. In the palace lived Marama, all alone. At first he had been so charmed with his fine new land that he had not noticed the loneliness, but after some time he began to say to himself: “Why have I no one to share my work and play? There is no pleasure in playing star-ball by myself, and I am tired of singing with no one to listen. Oh, for a companion!”

He asked the Sky-fairies to live with him, but they refused; they had their stars to guard. He looked down on the earth. A beautiful girl with a calabash in her hand walked to a stream at the foot of a hill for water. A young man ran down the hill after her. “Ina! Ina! ” he called.  It was her old playmate, the friend she loved better than anybody else. She waited for him. They went to the stream together, and Marama watched the return. Several times the girl’s face was turned upwards to the moon; each time Marama thought it more beautiful. All next day he could think of nothing else.

“She would never leave her old playmate and her home,” he thought, ” and yet she is the companion I desire. What a sweet friend she would be.” When night came again he watched for Ina. Down the hill she came as before, her calabash in her hand. Her playmate had not yet appeared; she awaited him. “I will go down! She shall return with me,” said Marama suddenly.

In a flash he stood before her. At first his brightness dazzled her, but little by little she looked at him and saw that he was a stranger. “I am Marama,” he said. “I have come to ask you to live with me on the Moon. It is a beautiful life, and I will be kind to you. Come!”

Ina drew back. “I cannot leave my parents and my home,” she said. “I should be most unhappy.”

“You will soon forget them. On the Moon you will have other joys.”

“But I do not want to forget them. And I have a friend. I will not come.”

“Think how lonely I am up there,” urged Marama. “Ina, you will never grow old in the sky, for I will take you to bathe in Tane’s shining lake, which gives perpetual youth and beauty. Come with me.”

“No,” said Ina, “no, no!” Marama flung his arm round her and lifted her from the ground. She screamed, caught a young palm-tree with her hands, and clung to it with all her strength. Gently but surely Marama lifted her, dragging the palm-tree out by the roots, and carried her up to his Moon-land. 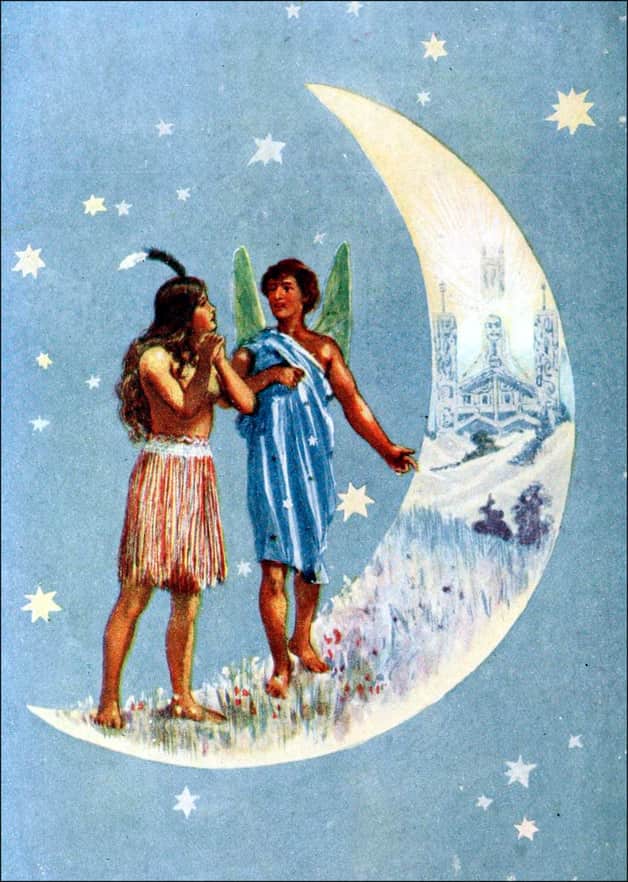 “Plant the palm-tree here,” he said as he set her down. ” It will always remind you of your earth-home.” They planted the tree on the edge of the Moon, placing the calabash beside it. “Come and see your new home,” said Marama. He led her proudly over his palace and its gardens. She was dazed with her quick flight and the brightness all around her, but she could not help seeing the beauty of the Moon-land. Everything was new and strange. It took her many days and nights to learn to work and play as they worked and played in Sky-land; but Marama taught her gently, and they were soon the best of friends.

She learnt to make fine curtains from the fleecy morning clouds, and to throw them across the sky till they hung like lace-work over the blue. In times of storm she rolled the thunder-clouds; morning and night she painted the domed sky-roof with crimson and purple and gold. She kept the inside of the Moon-palace as bright and beautiful as Marama kept the outside, for she grew to love her home.

When the day was over came the time for play. Then Marama and Ina danced and sang, played with the stars, rode on the moonlit clouds, paid flying visits to Rangi or the fairies. Every month they bathed in Tane’s shining lake, so that they should never grow old, but should for ever remain young and gay and beautiful. But although Ina was so happy, and although she had learned to love Marama and her moon- home, she never forgot her old life, as Marama hoped she would. Deep in her heart lay the memory of her parents and her friend. Often when the earth lay lit beneath the Moon she would stand for hours under her palm-tree, trying to see the hill and her friends. Until she had bathed in Tane’s lake, she could not distinguish objects at such a great distance ; after that, however, she found that she could see perfectly. Now, when she looked down, she saw her old playmate travelling wearily over the land in search of her, while her mother sat in the doorway wailing for her lost child.  Full of pity for her sorrowing friends, Ina flew to Marama.

“Marama,” she said,” my mother weeps for me, and my friend roams the country in search of me. Look on the earth and you will see their sadness.”

Marama looked below. “If my old playmate could see how happy I am he would be pleased,” she went on. “Bring him here for a visit, Marama, that he may ease my mother’s heart on his return.” ” It is well said. I will bring him here,” said Marama.

He flashed down to the earth, seized the young man in his arms, and carried him up to the Moon. Ina stood awaiting them. Astonishment and joy shone in her old friend’s eyes as he stared at her. Ina told him what had happened to her on that night when she disappeared from the hillside, and he told her how her friends had sorrowed for her ever since. Ina showed him the wonders of the Moon-land, and talked of her great happiness in living there. “I can never come back to the earth,” she said, “for I have bathed in Tank’s lake ; but you must not think I am unhappy here. Indeed, I would not return to the earth if I could, the pleasures of this life are so great. Stay with us for a little while that you may see what happiness is mine.”

He stayed with them, and they taught him the work and the play of the sky. When it was time for him to return Ina said: “Tell my mother and my friends what you have seen, that they may not sorrow for me any longer.”

She called the rainbow, charging it to carry her old playmate safely to the earth. The rainbow hung over the earth, Ina said farewell to her friend, and he slid down the shining bow to the hillside. When he told Ina’s mother of her daughter’s new life and great happiness, she dried her tears and rejoiced. As each night fell, and the Moon rose high in the sky, the earth-friends spoke of Ina and Marama and the wonders of their Moon-land home. Ina was satisfied. But she has never lost her love for her old earth-home. Even now, when the Moon is clear of clouds, you may see her gazing earthward, the tall palm-tree above her head, and the calabash at her feet. That is what you see if you look hard at the moon when it is at the full.

The Forty Princes and the Seven-headed Dragon

The Forty Princes and the Seven-headed Dragon