Fairytalez.com » A Treasury of Eskimo Tales » Origin of the Winds

In a village on the lower Yukon lived a man and his wife who had no children. One day the woman said to her husband, “Far out on the tundra there grows a solitary tree. Go to that and bring back a piece of the trunk, and make a doll from it. Then it will seem that we have a child.”

The man went out of the house and saw a long track of bright light like that made by the moon shining on snow, leading off across the tundra in the direction he had been told to take. It was the Milky Way. Along this path he traveled far away until he saw before him a beautiful object shining in the bright light. Going up to it, he found it was the tree of which he came in search. The tree was small, so he took his hunting-knife, cut off a part of the trunk, and carried the fragment home.

He sat down in the house and carved out from the wood an image of a small boy, and his wife made two suits of clothing for it and dressed it in one of them, “saving the other to put on when he had soiled the first,” she said.

“Now, Father, make your little boy a set of toy dishes,” she said.

“I see no use in all this trouble. We will be no better off than we were in the first place,” said the man.

“Why, yes, we are already better off,” said the wife. “Before we had the doll we had nothing to talk about except ourselves. Now we have the doll to talk about and to amuse us.”

To please her the husband made the toy dishes, and she placed the doll in the seat of honor on the bench opposite the door, with the dishes full of food and water before it.

When the couple had gone to bed that night the room was very dark and they heard several low, whistling sounds.

“Do you hear that? It is the doll,” said the woman, shaking her husband till he awakened.

They got up at once and, making a light, saw that the Doll had eaten the food and drunk the water, and that its eyes were moving. The woman caught it up with delight and fondled and played with it for a long time. When she became tired she put it back on the bench and they went to bed again.

In the morning when they got up the Doll was gone. They looked for it all around the house, but could not find it. Then they went outside, and there were its tracks leading away from the door. They followed the tracks to the creek and along the bank to a place outside the village, where they ended; for from this place the Doll had gone up the Milky Way on the path of light upon which the man had gone to find the tree.

Doll traveled along the bright path till he came to the edge of day, where the sky comes down to the earth and walls in the light. Close beside him, in the east, he saw a skin cover fastened over a hole in the sky wall. The skin was bulging inward as if some strong force on the other side were pushing it.

“It is very quiet here. I think a little wind would make it livelier,” said the Doll, drawing his knife and cutting the cover loose on one side of the hole. At once a strong wind blew through, every now and then bringing with it a live reindeer. Looking through the hole, Doll saw beyond the wall another world like the earth. He drew the cover over the hole again.

“Do not blow too hard,” he said to the wind. “Sometimes blow hard, sometimes light, and sometimes do not blow at all.” 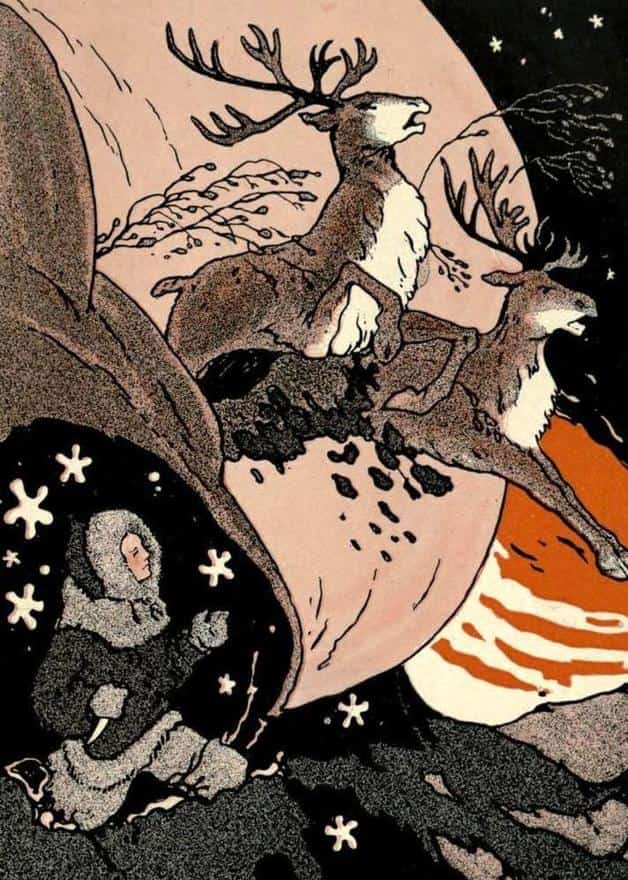 Then he got upon the sky wall and walked along till he came to the southeast. Here another opening was covered like the first, and the covering was bulging inward. When he cut this covering loose a gale swept in bringing reindeer, trees, and bushes. He quickly covered the hole and said to the gale, “You are too strong. Sometimes blow hard, sometimes light, and sometimes do not blow at all. The people on earth will want variety.”

Again walking along the sky wall he came to a hole in the south, and when this covering was cut a hot wind came rushing in carrying rain and spray from the great sea lying beyond the sky-hole on that side. Doll closed this opening and talked to the wind as before.

Then he passed on to the west where there was another hole which admitted heavy rainstorms, with sleet and spray from the ocean. When he had closed this and given the wind its instructions he went on to the northwest. There, when he cut away the covering, a cold blast came rushing in, bringing snow and ice, so that he was chilled to the bone and half frozen, and he made haste to close the hole as he had the others.

He started to go along the sky wall to the north, but the cold became more and more severe until at last he was obliged to leave the wall and make a circuit to the southward, going back to the north only when he came opposite the opening. There the cold was so intense that he waited some time before he could muster courage to cut the cover away. When he did so, a fearful blast rushed in, carrying great masses of snow and ice, strewing it over the entire plain of the earth. It was so bitter that he closed the hole very quickly, and told the wind from that direction to come only in the middle of the winter so that the people might not be taken unawares, and might be prepared for it.

From there he hastened down to warmer climes in the middle of the earth plain, where, looking up, he saw that the sky was supported by long, slender, arching poles, like those of a conical lodge, but made of some beautiful material unknown to him. Journeying on, he finally came to the village from which he started and went into his own home.

Doll lived in this village for a very long time; for when the foster parents who had made him died, he was taken by other people of the village and so lived on for many generations, until he finally died. Since his death parents have made dolls for their children in imitation of the Doll who first opened the wind-holes of the sky and regulated all the six winds of earth.

The Marmot and the Raven

Prev Story Raven and the Geese
Next Story

The Marmot and the Raven