Once upon a time there lived a king who had but one son, and he was called the Kindhearted. When the prince was twenty years old, he asked the king, his father, to let him go traveling. His father fitted him out for the journey, gave him a true servant to guard him, and his fatherly blessing. The prince took leave of his father, mounted a brave steed and went to different countries, to see God’s world, to learn many things, and to return home a wiser and a better man.

Once when the prince was slowly riding through a silent field, he suddenly perceived an eagle in pursuit of a swan. The white swan was almost caught by the eagle’s sharp claws, when the prince, carefully aiming, fired his pistol. The eagle fell dead, and the happy swan came down and said: “Prince Kindhearted, I thank you for your help. It is not a swan that is thanking you, but the enchanted daughter of the Knight Invisible. You have not saved me from an eagle’s claws, but from the terrible magician King Koshchey. My father will pay you well for your services. Remember whenever you are in need, to say three times: ‘Knight Invisible, come to my help!'” The swan flew away as soon as it had finished speaking, and the prince looked after it, then continued his journey.

He crossed many high mountains, traversed deep rivers, passed foreign countries, and at last he came to a great desert, where there was nothing to see but sky and sand. No man lived there, no animal’s voice was ever heard, no vegetable ever grew there; the sun was shining so brightly and burning so terribly that all the rivers were dried up, their beds were lost in the sand, and there was not a drop of water anywhere. The young prince anxious to go everywhere and see everything and not noticing how dry things were, kept going farther and farther, and deeper and deeper, into the desert. But after a while he became terribly thirsty. In order to find some water he sent his servant in one direction and he himself went in another. After a long time he succeeded in finding a well. He called to his servant, “I have found a means of getting some water,” and they both were happy. But their happiness did not last, for the well was very deep and they had nothing with which to reach the water.

The prince said to the servant: “Dismount, I will let you down into the well by some long ropes and you shall draw up some water.”

“No, my prince,” answered the servant, “I am much heavier than you are, and Your Majesty’s hands will not be able to hold me. You take hold of the ropes, and I will let you down into the well.”

The prince, the ropes tied around him, went down into the well, drank the cold water, and taking some of it for the servant, pulled the ropes, as a sign for the servant to draw him up again.

But instead of pulling him up, the servant said: “Listen, you, kingly son! From your cradle-days until now you have lived a happy life, surrounded by luxury and love, and I have always led the life of a miserable wretch. Now you must agree to become my servant, and I will be the prince instead of you. If you will not exchange, say your last prayer, for I am going to drown you.”

“Do not drown me, my true servant, you will not gain anything by it. You will never find such a good master as I am, and you know what a murderer may expect in the next world.”

“Let me suffer in the next world, but I will make you suffer in this one,” answered the servant and he began to loosen the ropes.

“Stop!” cried the prince, “I will be thy servant and you shall be the prince. I will give you my word for it.”

“I do not believe your word. Swear that you will write down what you promise me, now, for words are lost in the air, and writing always remains as a testimony against us.”

The servant let down into the well a sheet of paper and a pencil, and told the prince to write the following: “The bearer of this is Prince Kindhearted, traveling with his servant, a subject of his father’s kingdom.”

The servant glanced over the note, pulled the prince out of the well, gave him his shabby clothes, and put on the prince’s rich dress. Then having changed armor and horses, they went on.

In a week or so they came to the capital of a certain kingdom. When they approached the palace, the false prince gave his horse to the false servant and told him to go to the stable, and he himself went straight into the throne chamber and said to the king: “I come to you to ask for the hand of your daughter, whose beauty and wisdom are known all over the world. If you consent, you will have our favor; if not, we will decide it by war.”

“You do not speak to me in a nice way at all, not as a prince ought to speak, but it may be that in your country you are not used to better manners. Now listen to me, my future son-in-law. My kingdom is now in the hands of an enemy of mine. His troops have captured my best soldiers and now they are approaching my capital. If you will clear my kingdom from these troops, my daughter’s hand will be yours as a reward.”

“All right,” answered the false prince, “I will drive your enemies away. Do not worry if they come to the capital. Tomorrow morning not one enemy will be left in your land.” In the evening he went out of the palace, called his servant and said to him: “Listen, my dear! Go out to the city walls, drive away the foreign troops, and for this service I will return to you your note, by which you denied your kingdom and swore to be my servant.”

The honest Prince Kindhearted put on his knightly armor, mounted his steed, went out to the city walls and called in a loud voice: “Knight Invisible! Come to my help!”

“Here I am,” said Knight Invisible, “what do you wish me to do for you? I am ready to do everything for you, because you saved my child from the terrible Koshchey.”

Prince Kindhearted showed him the troops, and the Knight Invisible whistled loudly and called: “Oh you, my wise horse, come to me quickly!” 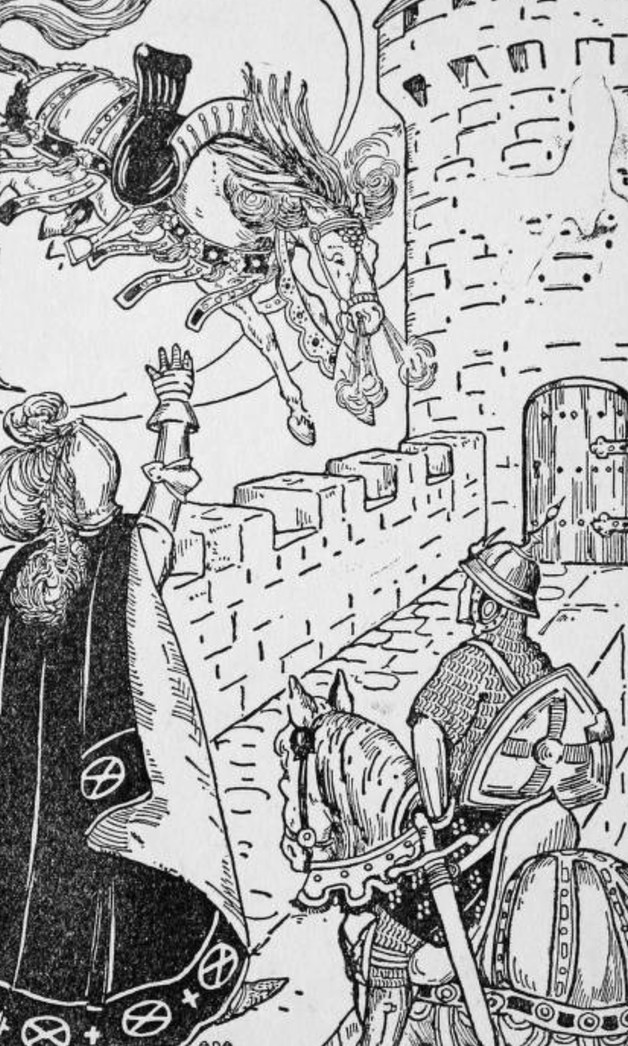 “A wonderful horse appeared, having a golden mane.” Illustration by Ada Budell, published in Stories to Read or Tell from Fairy Tales and Folklore by Laura Claire Foucher (1917), Moffat, Yard, and Company.

There was a rustling in the air, it thundered, the earth trembled, and a wonderful horse appeared, having a golden mane, from his nostrils a fire was burning, from his eyes bright sparks were flying, and from his ears thick clouds of smoke were coming.

Knight Invisible jumped upon the horse and said to the prince: “Take this magic sword and attack the troops from the left, and I upon my golden-maned horse will attack them from the right.”

They both attacked the army. From the left the soldiers were falling like wood, from the right like whole forests. In less than an hour the entire army vanished. Some of them remained upon the spot, dead; some of them fled. Prince Kindhearted and the Knight Invisible met upon the battle-field, shook hands in a friendly way, and in a minute the Knight Invisible and his horse turned into a bright red flame, then into thick smoke, which disappeared in the darkness. The prince returned quietly to the palace.

The young princess felt very sad that evening. She could not sleep and so leaned out of her window, whence she overheard the conversation between the prince and the servant. Then she saw what was going on behind the city walls. She also saw the Knight Invisible disappear in the darkness, and Prince Kindhearted return to the palace. She saw the false prince coming out of the palace, taking the knightly armor from the servant, and Prince Kindhearted entering the stable to rest.

The next morning, the old king, seeing his land freed from the enemies, felt very happy, and gave the prince many rich presents. But when he announced the engagement of his daughter to him, she stood up, took the hand of the real prince, who helped to serve at the table, led him before the old king and said: “My dearest father and king, and all you that are present here! This man is my bridegroom, sent to me by God, for he is your savior, and the real prince. And that one who calls himself a prince, is a traitor; a false and dishonest man.” Then the princess told everything she knew and said: “Let him show some proof that he really is a prince.”

“Is it really so?” cried the wretch and he became pale as death.

“Yes, read it yourself, if you do not believe it,” answered the king.

“I cannot read,” said the poor fellow. He knelt before his master and begged for mercy, but he received what he deserved.

Prince Kindhearted and the princess were happily married, and I was present at the wedding feast and also felt happy.