Fairytalez.com » Elsie Spicer Eells » The Princess of the Springs

Once, long ago, the Moon Giant wooed the beautiful giantess who dwells in the Great River and won her love. He built for her a wonderful palace where the Great River runs into the sea. It was made of mother-of-pearl with rich carvings, and gold and silver and precious stones were used to adorn it. Never before in all the world had a giant or giantess possessed such a magnificent home.

As the beautiful Spring Princess grew older many suitors came to sing her praises beneath the palace windows, but she favoured none of them. She was so happy living in her own lovely palace with her own dear mother that she did not care at all for any suitor. No other daughter ever loved her mother as the Spring Princess loved the Giantess of the Great River.

When he asked her to marry him, however, and go with him to his own palace, the Spring Princess shook her lovely head. “O Sun Giant, you are so wonderful and so powerful that I love you as I never before have loved a suitor who sang beneath my palace window,” said she, “but I love my mother, too. I cannot go away with you and leave my own dear mother. It would break my heart.”

The Sun Giant told the Spring Princess again and again of his great love for her, of his magnificent palace which would be her new home, of the happy life which awaited her as queen of the palace. At length she listened to his pleadings and decided that she could leave home and live with him for nine months of the year. For three months of every year, however, she would have to return to the wonderful palace of mother-of-pearl where the Great River runs into the sea and spend the time with her mother, the Giantess of the Great River.

The Sun Giant at last sorrowfully consented to this arrangement and the wedding feast was held. It lasted for seven days and seven nights. Then the Spring Princess went away with the Sun Giant to his own home.

When at last the little son of the Spring Princess was born she wanted to take him with her when she went to visit her mother. The Sun Giant, however, did not approve of such a plan. He firmly refused to allow the child to leave home. After much pleading, all in vain, the Spring Princess set out upon her journey alone, with sorrow in her heart. She left her baby son with the best nurses she could procure.

Now it happened that the Giantess of the Great River had not expected that her daughter would be able to visit her that year. She had thought that all the rivers and lakes, the palace of mother-of-pearl, and her own mother heart would have to get along as best they could without a visit from the Spring Princess. The Giantess of the Great River had gone away to water the earth. One of the land giants had taken her prisoner and would not let her escape.

When the Spring Princess arrived at the beautiful palace of mother-of-pearl and gold and silver and precious stones, where the Great River runs into the sea, there was no one at home. She ran from room to room in the palace calling out, “O dear mother, Giantess of the Great River, dear, dear mother! Where are you? Where have you hidden yourself?” 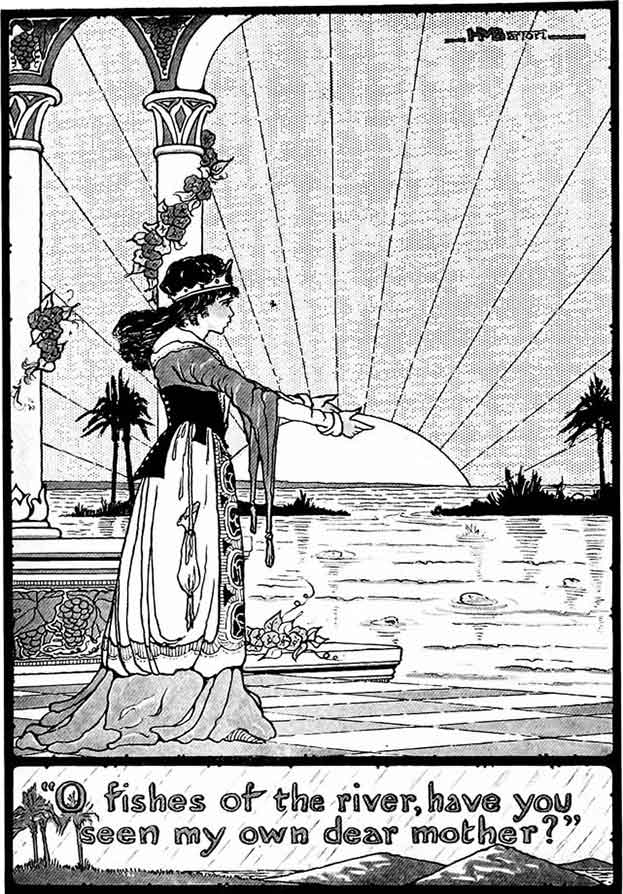 The Princess of the Springs. Illustration by Helen M. Barton, published in Tales of giants from Brazil (1918).

There was no answer. Her own voice echoed back to her through the beautiful halls of mother-of-pearl with their rich carvings. The palace was entirely deserted.

There was no answer. No one knew what had become of the Giantess of the Great River.

The Spring Princess was so worried that she thought her heart would break in its anguish. In her distress she ran over all the earth.

Then she went to the house of the Great Wind. The Giant of the Great Wind was away, but his old father was at home. He was very sorry for the Spring Princess when he heard her sad story. “I am sure my son can help you find your mother,” he said as he comforted her. “He will soon get home from his day’s work.”

When the Giant of the Great Wind reached home he was in a terrible temper. He stormed and raged and gave harsh blows to everything he met. His father had hid the Spring Princess in a closet out of the way, and it was fortunate indeed for her that he had done so.

After the Great Wind Giant had taken his bath and eaten his dinner he was better natured. Then his father said to him, “O my son, if a wandering princess had come this way on purpose to ask you a question, what would you do to her?”

“Why, I’d answer her question as best I could, of course,” responded the Giant of the Great Wind.

“O Giant of the Great Wind,” said the Spring Princess, as he gently raised her from her knees before him, “I am the daughter of the Giantess of the Great River. I have lost my mother. I have searched for her through all the earth and now I have come to you for help. Can you tell me anything about where she is and how I can find her?”

The Giant of the Great Wind put on his thinking cap. He thought hard. “Your mother is in the power of a land giant who has imprisoned her,” he said. “I happen to know all about the affair. I passed that way only yesterday. I’ll gladly go with you and help you get her home. We’ll start at once.”

When the Spring Princess had led her mother safely outside the castle walls she thanked the Giant of the Great Wind for all he had done to help her. Then the Giantess of the Great River and the Spring Princess hastened back to the wonderful palace of mother-of-pearl set with gold and silver and precious stones, where the Great River runs into the Sea. As soon as she had safely reached there once more the Spring Princess suddenly remembered that she had stayed away from her home in the palace of the Sun Giant longer than the three months she was supposed to stay according to the agreement. She at once said good-bye to her mother and hastened to the home of the Sun Giant, her husband, and to her baby son.

Now the Sun Giant had been very much worried at first when the three months had passed and the Spring Princess had not come back to him and her little son. Then he became angry. He became so angry that he married another princess. The new wife discharged the nurses who were taking care of the tiny son of the Spring Princess and put him in the kitchen just as if he had been a little black slave baby.

When the Spring Princess arrived at the palace of the Sun Giant the very first person she saw was her own little son, so dirty and neglected that she hardly recognized him. Then she found out all that had happened in her absence.

Prev Story The Fountain of Giant Land
Next Story