Swanda, the Piper, was a jolly companion. Like every true musician, he was born with an unquenchable thirst; besides, he was madly fond of play, and would have risked his soul at strajak, the favorite game at cards in Bohemia. When he had earned a little money he would throw aside his pipes, and drink and play with the first comer till he returned to his home as light in pocket as when he had left it. But he was always so merry, witty, and good-natured that not a drinker ever left the table while the piper was there, and his name still lives in Bohemia as the prince of good fellows.

One day there was a festival at Mokran, and no merry-making was ever complete without the piper. Swanda, after blowing his pipe till midnight and earning twenty zwanzigers, determined to amuse himself on his own account. Neither prayers nor promises could persuade him to go on with his music; he was determined to drink his fill and to shuffle the cards at his ease; but, for the first time in his life, he found no one to play with him.

Swanda was not the man to quit the inn so long as he had a kreutzer in his pocket, and on that day he had many of them. By dint of talking, laughing, and drinking he took one of those fixed ideas which are not uncommon among those who look too often in the bottom of their glass, and determined to play at any price; but all his neighbors refused his challenge. Furious at finding no partner, he rose with an unsteady step, paid for what he had drank, and left the inn.

“I will go to Drazic,” said he; “the schoolmaster and the bailiff there are honest people who are not afraid of play, and I shall find partners. Hurrah!”

The night was clear and the moon shone like a fish’s eye. On reaching a cross-road Swanda raised his eyes by chance, and stopped, mute and motionless. A flock of ravens were croaking over his head, and in front of him rose four posts, standing like pillars, and connected at the top by cross-beams, from each of which swung a half-devoured corpse. It was a robbers’ gallows, a spectacle by no means amusing to a less stoical spirit than that of Swanda.

He had not recovered from the first shudder when suddenly there appeared before him a man dressed in black with pale and hollow cheeks, and eyes that glittered like carbuncles.

“Where are you going so late, friend Piper?” asked he, in a soft voice.

“Would you like to earn something by your music?”

“I am tired of blowing,” returned Swanda. “I have some silver in my pocket, and wish to amuse myself.”

“Who talks to you of silver? It is with gold that we pay.”

Saying this, the stranger flashed before his eyes a handful of shining ducats. The piper was the son of a thrifty mother; he knew not how to resist such an invitation, and followed the black man and his gold.

How the time passed he never could remember. It is true that his head was a little heavy. The only thing that he recollected was that the black man warned him to accept whatever was offered him, whether gold or wine, but never to return thanks except by saying “Good luck, brother!”

Without knowing how he had entered, he found himself in a dark room where three men, dressed in black like his guide, were playing at strajak by no other light than their glittering eyes. On the table were piles of gold, and a jug from which each one drank in his turn.

“Brothers,” said the black man, “I bring you friend Swanda, whom you have long known by reputation. I thought to please you on this feast-day by giving you a little music.”

“A good idea!” said one of the players. Then, taking the jug, he handed it to Swanda, saying, “Here, piper, drink and play.”

Swanda had some scruples; but, after all, it is impossible to have charcoal without putting your finger into the ashes. The wine, though rather warm, was not bad. He replaced the jug on the table, and raising his hat, said, “Good luck, brother!” as he had been advised. 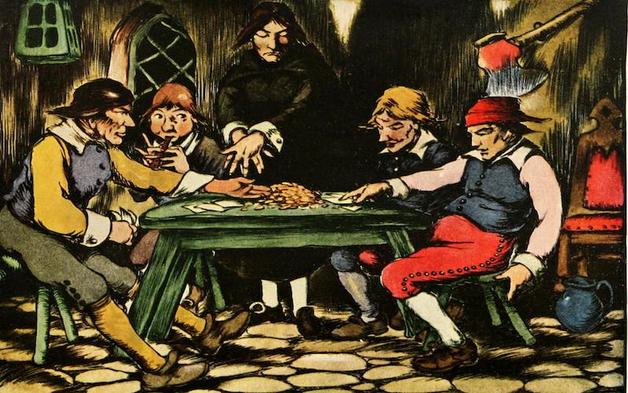 “He began to play, and never had his music produced such an effect.” Illustration by Edward G. McCandlish, published in Laboulaye’s Fairy Book by Edouard Laboulaye (1866), Harper and Brothers

He began to play, and never had his music produced such an effect. Each note made the players leap for joy. Their eyes shot forth flames; they moved about uneasily in their chairs; they staked the ducats by handfuls; they shouted and burst into loud fits of laughter without stirring a muscle of their pallid faces. The jug passed from hand to hand, always full, though replenished by no one.

As soon as Swanda finished an air they handed him the jug, from which he never failed to drink deeply, and threw handfuls of gold into his hat. “Good luck, brother!” he repeated, astounded at his fortune—”good luck!”

The feast lasted a long time. At last, the piper having struck up a polka, the black men, in a transport of mirth, quitted the table and danced and waltzed with an ardor[100] and frenzy which ill accorded with their icy faces. One of the dancers gathered up all the gold that was heaped on the table, and, pouring it into Swanda’s hat, “Here,” said he, “take this for the pleasure that you have given us.””God bless you, my good lords!” said the dazzled piper. Scarcely had he spoken when men, room, and cards vanished.

In the morning a peasant on his way to the fields heard the sound of a pipe as he approached the cross-road. “It is Swanda,” said he. But where was the piper? Seated on a corner of the gallows, he was blowing with all his might, while the corpses of the robbers danced in the wind to his music.

“Halloo, comrade!” cried the peasant. “How long have you been playing the cuckoo up there?”

Swanda started, dropped his pipe, opened his eyes, and glided, bewildered, down the gallows. His first thought, however, was for his ducats. He rummaged his pockets and turned his hat inside out, but all in vain; there was not even a kreutzer!

“My friend,” said the peasant, making the sign of the cross, “God has punished you by giving you the devil for a partner; you love cards too well.”

“You are right,” said Swanda, trembling; “I will never touch them again in my life.”

He kept his word; and, to thank Heaven for having preserved him from such peril, he took the fatal pipe to which the devil had danced, and suspended it as a votive offering in the church of Strakonic, his birthplace, where it may be seen to this day. The pipe of Strakonic has become a proverb, and it is even said that its sound is heard every year at the day and hour when Swanda played for Satan and his friends.

Prev Story The Story of the Noses
Next Story