Fairytalez.com » Cornelius Mathews » The Boy Who Set a Snare for the Sun

At the time when the animals reigned in the earth, they had killed all the people but a girl and her little brother, and these two were living in fear, in an out-of-the-way place. The boy was a perfect little pigmy, and never grew beyond the size of a mere infant; but the girl increased with her years, so that the task of providing food and shelter fell wholly upon her. She went out daily to get wood for the lodge-fire, and she took her little brother with her that no mishap might befall him; for he was too little to leave alone. A big bird, of a mischievous disposition, might have flown away with him. She made him a bow and arrows, and said to him one day, “My little brother, I will leave you behind where I have been gathering the wood; you must hide yourself, and you will soon see the snow-birds come and pick the worms out of the logs which I have piled up. Shoot one of them and bring it home.” 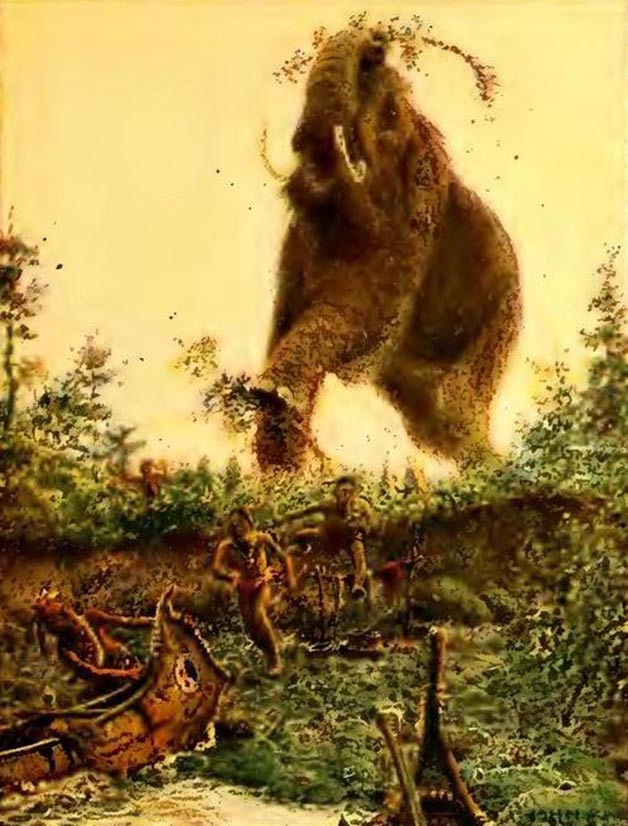 “The biggest of them all was Bosh-kwa-dosh, the Mastodon.” Illustration by John Rae. Published in American Indian Fairy Tales by Anonymous. 1921. P. F. Volland Company

He obeyed her, and tried his best to kill one, but he came home unsuccessful. His sister told him that he must not despair, but try again the next day.

She accordingly left him at the gathering-place of the wood, and returned to the lodge. Toward night-fall she heard his little footsteps crackling through the snow, and he hurried in and threw down, with an air of triumph, one of the birds which he had killed. “My sister,” said he, “I wish you to skin it, and stretch the skin, and when I have killed more, I will have a coat made out of them.”

“But what shall we do with the body?” said she; for they had always up to that time lived upon greens and berries.

“Cut it in two,” he answered, “and season our pottage with one half of it at a time.”

It was their first dish of game, and they relished it greatly.

The boy kept on in his efforts, and in the course of time he killed ten birds—out of the skins of which his sister made him a little coat: being very small, he had a very pretty coat, and a bird skin to spare.

“Sister,” said he, one day, as he paraded up and down before the lodge, enjoying his new coat, and fancifying himself the greatest little fellow in the world—as he was, for there was no other beside him—”My sister, are we really alone in the world, or are we playing at it? Is there nobody else living? And, tell me, was all this great broad earth and this huge big sky made for a little boy and girl like you and me?”

She told him, by no means; there were many folks very unlike a harmless girl and boy, such as they were, who lived in a certain other quarter of the earth, who had killed off all of their kinsfolk; and that if he would live blameless and not endanger his life, he must never go where they were. This only served to inflame the boy’s curiosity; and he soon after took his bow and arrows and went in that direction. After walking a long time and meeting no one, he became tired, and stretched himself upon a high green knoll where the day’s warmth had melted off the snow.

It was a charming place to lie upon, and he fell asleep; and, while sleeping, the sun beat so hot upon him that it not only singed his bird-skin coat, but it so shrivelled and shrunk and tightened it upon the little boy’s body, as to wake him up.

When he felt how the sun had seared and the mischief its fiery beams had played with the coat he was so proud of, he flew into a great passion, and berated the sun in a terrible way for a little boy no higher than a man’s knee, and he vowed fearful things against it.

“Do not think you are too high,” said he; “I shall revenge myself. Oh, sun! I will have you for a plaything yet.”

On coming home he gave an account of his misfortune to his sister, and bitterly bewailed the spoiling of his new coat. He would not eat—not so much as a single berry. He lay down as one that fasts; nor did he move nor change his manner of lying for ten full days, though his sister strove to prevail on him to rise. At the end of ten days he turned over, and then he lay full ten days on the other side.

When he got up he was very pale, but very resolute too. He bade his sister make a snare, for, he informed her, that he meant to catch the sun. She said she had nothing; but after awhile she brought forward a deer’s sinew which the father had left, and which she soon made into a string suitable for a noose. The moment she showed it to him he was quite wroth, and told her that would not do, and directed her to find something else. She said she had nothing—nothing at all. At last she thought of the bird-skin that was left over when the coat was made; and this she wrought into a string. With this the little boy was more vexed than before. “The sun has had enough of my bird-skins,” he said; “find something else.” She went out of the lodge saying to herself, “Was there ever so obstinate a boy?” She did not dare to answer this time that she had nothing. Luckily she thought of her own beautiful hair, and pulling some of it from among her locks, she quickly braided it into a cord, and, returning, she handed it to her brother. The moment his eye fell upon this jet black braid he was delighted. “This will do,” he said; and he immediately began to run it back and forth through his hands as swiftly as he could; and as he drew it forth, he tried its strength. He said again, “this will do;” and winding it in a glossy coil about his shoulders, he set out a little after midnight. His object was to catch the sun before he rose. He fixed his snare firmly on a spot just where the sun must strike the land as it rose above the earth; and sure enough, he caught the sun, so that it was held fast in the cord and did not rise.

The animals who ruled the earth were immediately put into great commotion. They had no light; and they ran to and fro, calling out to each other, and inquiring what had happened. They summoned a council to debate upon the matter, and an old dormouse, suspecting where the trouble lay, proposed that some one should be appointed to go and cut the cord. This was a bold thing to undertake, as the rays of the sun could not fail to burn whoever should venture so near to them.

At last the venerable dormouse himself undertook it, for the very good reason that no one else would. At this time the dormouse was the largest animal in the world. When he stood up he looked like a mountain. It made haste to the place where the sun lay ensnared, and as it came nearer and nearer, its back began to smoke and burn with the heat, and the whole top of his huge bulk was turned in a very short time to enormous heaps of ashes. It succeeded, however, in cutting the cord with its teeth and freeing the sun, which rolled up again, as round and beautiful as ever, into the wide blue sky. But the dormouse—or blind woman as it is called—was shrunk away to a very small size; and that is the reason why it is now one of the tiniest creatures upon the earth.

The little boy returned home when he discovered that the sun had escaped his snare, and devoted himself entirely to hunting. “If the beautiful hair of my sister would not hold the sun fast, nothing in the world could,” he said. “He was not born, a little fellow like himself, to look after the sun. It required one greater and wiser than he was to regulate that.” And he went out and shot ten more snow-birds; for in this business he was very expert; and he had a new bird-skin coat made, which was prettier than the one he had worn before.

Prev Story Strong Desire and the Red Sorcerer
Next Story