There was once a laborer who had a daughter whom he loved very dearly. One day, when he was on his way home from his daily work, he saw a pink carnation growing beside the path. He picked it and carried it home to his daughter. She declared that it was the most beautiful carnation she had ever seen. She put it carefully into  a glass of water.

That evening, as she held it in her hand, admiring it, she carelessly let it fall into the candle. The pink carnation began to burn immediately.

At that moment there suddenly appeared a handsome youth, who said to the girl sadly: “Why don’t you speak to me? You will have to seek me among the rocks of the whole world.” Then he disappeared as mysteriously as he had appeared.

The poor laborer’s daughter had never seen such a handsome young man in her life. She dreamed of him night and day. His words kept ringing in her ears, “You will have to seek me among the rocks of the whole world.”

There was nothing else for the girl to do except to go in search of the mysterious youth. She could no longer be happy in her own home. Accordingly she walked and walked.

Finally she came to a high rock on the bank of a river and as she was exceedingly tired she sat down to rest. It was very hot and she began to cry because of her great weariness and the intense heat.

Suddenly the rock opened and the handsome youth stepped out. “Why are you crying?” he asked gently.
The girl was so frightened that she could not say a word. She just kept on crying.

The handsome youth went on, “Over there through the forest you will see a large house with broad fields about it. Go to the house and hire out as a servant. They will receive you gladly there.” With these words he disappeared into the rock.

There was nothing better for the tired girl to do than to follow his advice, and she found the house as he had directed. The mistress of the house was in need of a maid, and she hired the girl at once. Soon the laborer’s daughter became the favorite servant of the entire establishment, with her pretty face, her industrious habits, and her pleasant ways.

Then the other servants became jealous, and they plotted against her to get her into trouble. They went to their mistress and said: ” Do you know what your new maid has been saying in the kitchen?”

Their mistress ordered them to tell her what it was.

“She says that you do not need to have so many servants. She alone could wash all the dirty clothes in one day.”

The mistress called the little maid to her and asked if it were true. The poor girl wept and said that it was false, that she had never said any such thing; but the other servants agreed that they all had heard her say it, and her mistress commanded her to wash all the dirty clothes in one day, according to her boast.

The little maid went to the river with the dirty clothes and sat down upon the rocks to cry. Suddenly the rock opened and the handsome youth stepped forth.

“Why are you crying?” he asked.

The girl was so surprised that she did not answer, but went on crying harder than ever.

The youth continued, “Do not worry about washing the clothes. Just leave them here on the river bank and ask the birds of all the world to come and help you.”

The girl looked up in amazement, but the youth had disappeared into the rock.

She did as he had advised, and called out: “O birds of all the world, come and help me!”

The birds seized the dirty garments in their beaks and shook them up and down in the river. Soon all
the soiled clothes were clean and white.

In the afternoon they were dry and ready to carry home. The mistress and the other servants could not believe their eyes when they saw that the washing had all been done. The mistress loved her little maid more than ever and told all her friends what a perfect jewel of a servant she had in her employ.

Then the other servants became more jealous than ever and thought of another plot. Now it happened that their mistress had an only son who left the house one day and never came back. He had been enchanted. His poor mother wept until she nearly lost her eyesight. Accordingly, the servants went to their mistress and said that the new maid had boasted that she knew where to get an eyewater which would cure any eye trouble in the world.

Of course the poor girl had never said such a thing, but all the servants agreed that she had, and her mistress became angry because her maid had known of an eyewater which she had not obtained. Accordingly, the mistress sent the girl in search of the eyewater which would restore failing sight.

The little maid went down to the river bank and sat down upon the rocks, crying as if her heart would break. She did not know a single thing about eye-waters.

At once the rock opened and the handsome youth stepped out. “What is the matter? Why are you crying?” he asked.

As he received no reply, he went on to say, “I know how you may obtain an eyewater which will cure my mother’s eyesight. Take a cup and stand by the river bank. Then call to the birds of all the world and ask them to come and weep with you.” The youth disappeared. 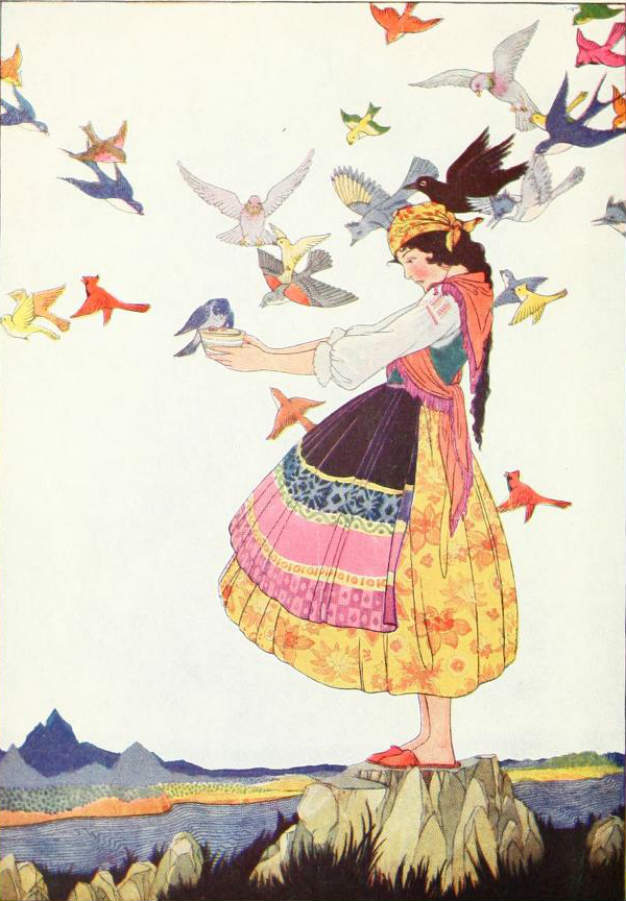 “The little maid had not known that there were so many kinds of birds in the whole world.” Illustration by Maude and Miska Petersham. Published in Tales of Enchantment from Spain by Elsie Spicer Eells (1920), Harcourt, Brace and Company.

The little maid followed his advice and stood by the river bank with a cup in her hands. She asked the birds of all the world to come and weep with her, and at once they came flying up to her. Each one deposited a tear in the cup and soon it was full. The last bird which came dropped a tiny white feather into the cup.

When she bathed the eyes of her mistress with the water, using the tiny white feather, her mistress became better immediately. Soon she could see as well as ever, and she loved her little maid more and more.

The jealous servants plotted again against the maid. They told their mistress that she had boasted of knowing how to break the enchantment which bound the son of the house. By this time their mistress had such confidence in her maid that she believed the girl could do anything.

When she said she had never made any such boast, her mistress said, “Never mind! Just go ahead and
try! If you should succeed in breaking my son’s enchantment and restoring him to me once more, I’d make you his wife.”

The little maid went down to the rocks beside the river and cried as if her heart would break. The handsome youth came forth from the rock as before and asked why she was crying.

When she did not reply he said, “I know that my mother has sent you to break my enchantment. Gather together all the maidens in the town, rich and poor alike, and come and march about the rocks in a procession, each girl with a lighted candle in her hand. Be sure that no candle goes out. We’ll see what that will do to break my enchant-
ment!”

When he had once more disappeared, the little maid ran as fast as she could to gather together all the young girls of the town, rich as well as poor. A beautiful procession they made, too, when they came to march about the rocks, each with a lighted candle in her hand. The little maid was the last of all in the procession, and, just as she came to the rocks, the wind blew out her candle.

She saw that the handsome youth had already appeared.

“At last you have spoken in my presence!” he cried. “Now at last my enchantment is broken!”

“I thought I had spoiled everything when my candle went out! ” exclaimed the little maid.

The young man explained to her how he had been enchanted one day when he was walking in the field. He had been changed into a carnation and had been told that his enchantment would be broken only when the person who burned the carnation should speak in his presence.

“You did not say one word when you burned me,” he told her reproachfully. “I had to go back into the rocks from which the carnation had sprung, and I began to think I’d never get you to say a word to me. You didn’t do anything but cry!”

The youth’s mother was the happiest woman in the town when she saw that her son was restored to her, alive and well. She kissed her little maid upon both cheeks.

“You shall be my own dear daughter, now,” she told her. “The wedding shall be celebrated immediately.”

The little maid was entirely cured of the crying habit, and fortunate it was; for, after all the delay in getting his enchantment broken, her husband’s patience could never have endured a crying woman.

Prev Story The Enchanted Castle in the Sea
Next Story