Fairytalez.com » Brothers Grimm » The Children of Hameln (The Pied Piper)

In the year 1284 a mysterious man appeared in Hameln. He was wearing a coat of many colored, bright cloth, for which reason he was called the Pied Piper. He claimed to be a rat catcher, and he promised that for a certain sum that he would rid the city of all mice and rats. The citizens struck a deal, promising him a certain price. The rat catcher then took a small fife from his pocket and began to blow on it. Rats and mice immediately came from every house and gathered around him.

When he thought that he had them all he led them to the River Weser where he pulled up his clothes and walked into the water. The animals all followed him, fell in, and drowned.Now that the citizens had been freed of their plague, they regreted having promised so much money, and, using all kinds of excuses, they refused to pay him. Finally he went away, bitter and angry. He returned on June 26, Saint John’s and Saint Paul’s Day, early in the morning at seven o’clock (others say it was at noon), now dressed in a hunter’s costume, with a dreadful look on his face and wearing a strange red hat. He sounded his fife in the streets, but this time it wasn’t rats and mice that came to him, but rather children: a great number of boys and girls from their fourth year on. Among them was the mayor’s grown daughter. The swarm followed him, and he led them into a mountain, where he disappeared with them.

All this was seen by a babysitter who, carrying a child in her arms, had followed them from a distance, but had then turned around and carried the news back to the town. The anxious parents ran in droves to the town gates seeking their children. The mothers cried out and sobbed pitifully. 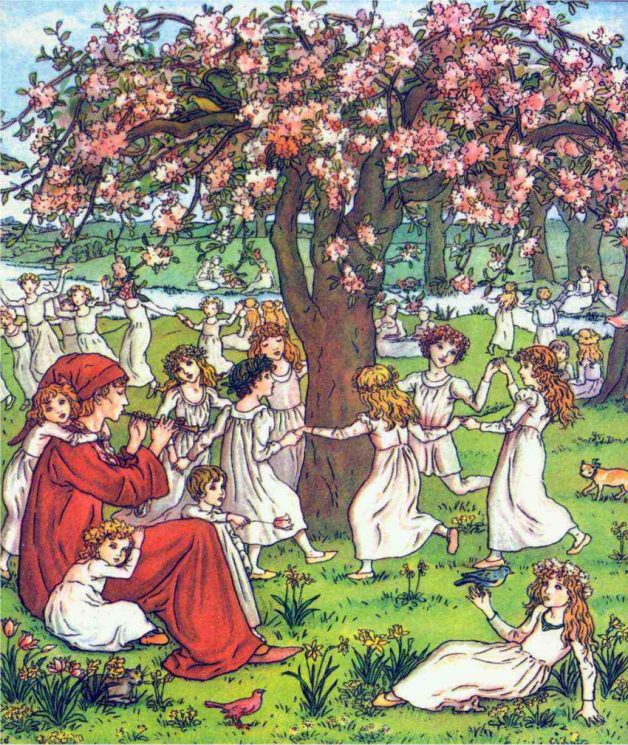 “The swarm followed him, and he led them into a mountain, where he disappeared with them.” Illustration by Kate Greenway,. Published in The Piped Piper of Hamlin by Robert Browning, 1888. Fredrick Warne and Co.

Within the hour messengers were sent everywhere by water and by land inquiring if the children — or any of them — had been seen, but it was all for naught. In total, one hundred thirty were lost. Two, as some say, had lagged behind and came back. One of them was blind and the other mute. The blind one was not able to point out the place, but was able to tell how they had followed the piper. The mute one was able to point out the place, although he [or she] had heard nothing. One little boy in shirtsleeves had gone along with the others, but had turned back to fetch his jacket and thus escaped the tragedy, for when he returned, the others had already disappeared into a cave within a hill. This cave is still shown.

Until the middle of the eighteenth century, and probably still today, the street through which the children were led out to the town gate was called the bunge-lose (drumless, soundless, quiet) street, because no dancing or music was allowed there. Indeed, when a bridal procession on its way to church crossed this street, the musicians would have to stop playing. The mountain near Hameln where the the children disappeared is called Poppenberg. Two stone monuments in the
form of crosses have been erected there, one on the left side and one on the right. Some say that the children were led into a cave, and that they came out again in Transylvania.

The citizens of Hameln recorded this event in their town register, and they came to date all their proclamations according to the years and days since the loss of their children.

According to Seyfried the 22nd rather than the 26th of June was entered into the town register.

The following lines were inscribed on the town hall:

[This gate was built 272 years after the magician led the 130 children from the city.]

The Story of Tremsin, the Bird Zhar, and Nastasia, the Lovely Maid of the Sea

The Story of Tremsin, the Bird Zhar, and Nastasia, the Lovely Maid of the Sea