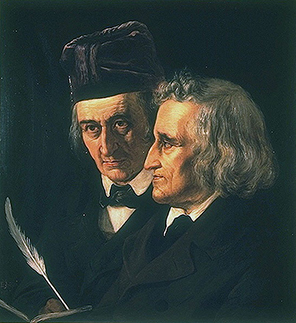 Wilhelm Grimm (left) and Jacob Grimm in a 1855 painting by Elisabeth Jerichau-Baumann.

Born in Hanau, Germany, 13 months apart, Jacob Grimm (1785–1863) and Wilhelm Grimm (1786–1859), are known together as the Brothers Grimm. The duo were German academics, linguists, cultural researchers, lexicographers and authors who together specialized in collecting and publishing folklore during the 19th century. Thanks to their work, The Brothers Grimm stories are some of the most beloved fairy tales today throughout the world. In 1796, the brothers lost their father, and were sent to study at the prestigious Friedrichsgymnasium thanks to an aunt, however, they were ostracized due to their low social standing. Undaunted, the two focused on their studies and after graduating, they attended the University of Marburg, where they became enthusiastic about medieval German literature. Throughout all of their studies, the oldest brother, Jakob, was responsible for the care of his mother and siblings and abandoned his studies to help provide for them. He became a full-time court librarian to the King of Westphalia and then in Kassel, where Wilhelm later joined him. It was at this time that the brothers begin collecting folklore, largely inspired by the work of Charles Perrault, and the fact that interest in the fairy tale had increased significantly.

The Brothers Grimm fairy tales came from peasants in their native country, but also from aristocrats and other notable figures. Many of the tales or fragments of them were known throughout different parts of Europe, however, the brothers collected them to preserve the stories. The stories were more than just folklore to the Grimm brothers, as they viewed the stories are important parts of their heritage. They invited storytellers to their home to share fairy tales, and rewrote several, such as Hansel and Gretel, as well as Charles Perrault’s Sleeping Beauty. For example, in the Brothers Grimm Sleeping Beauty version, known as Little Briar Rose, the story ends when the prince arrives to wake up the princess. From 1807 to 1810 the Grimms worked to collect all of these fairy tales, adding new detail and increasing the length to prepare them for new and old audiences.

Although many think that tales such as Sleeping Beauty and Cinderella originated with the Grimm Brothers, these stories existed in the public consciousness before the Grimms, however the Brothers Grimm certainly made them more accessible to the world at large. The Grimms often changed sexual references and cleansed the fairy tales, adding spiritual motifs as well. You can see such an example with the Brothers Grimm Rapunzel not including the princess’ impregnation from the prince. The first volume of the fairy tales by the Brothers Grimm was known as Kinder- und Hausmärchen, aka Children’s and Household Tales, and was published in 1812, however, it’s more commonly known as Grimm’s Fairy Tales, and featured 86 stories. Another volume featured 70 new tales. The book was massively popular, with over five editions published. The seventh edition featured 211 tales. Intricate illustrations by artists Philipp Grot Johann and later, Robert Leinweber, added to the appeal of the collections. Wilhelm Grimm died in 1859, and Jacob Grimm followed him in 1863. Several movies by Walt Disney including Cinderella and Sleeping Beauty are adaptations of the Grimms’ fairy tale work, and the popularity of Brothers Grimm movies still continues today.