Fairytalez.com » Ethel L. McPherson » The Daughter of the Sword

In days long past there dwelt a great King whose dominions extended from the rising of the sun to its setting, and who had conquered lands far to the North and the South.

Now, on the day on which the mightiest of his foes was overthrown a daughter was born to him, and because her birth came in the hour of victory while the spears of his warriors hurtled through the air and the vanquished lay upon the ground like mown grass, he named her the Daughter of the Sword.

And this daughter was dearer to him than any of his other children; he loved her above them all for her beauty and for her haughty spirit. So proud was he of this fair child that he vowed that when she became a full-grown maiden her coming of age should be celebrated by the slaying of many cattle brought from the East and the West, from the North and the South, which should be driven into her presence at the point of the sword. In such vast hordes should they come that the trampling of their feet would raise a cloud of dust so dense that the face of the sun would be darkened. 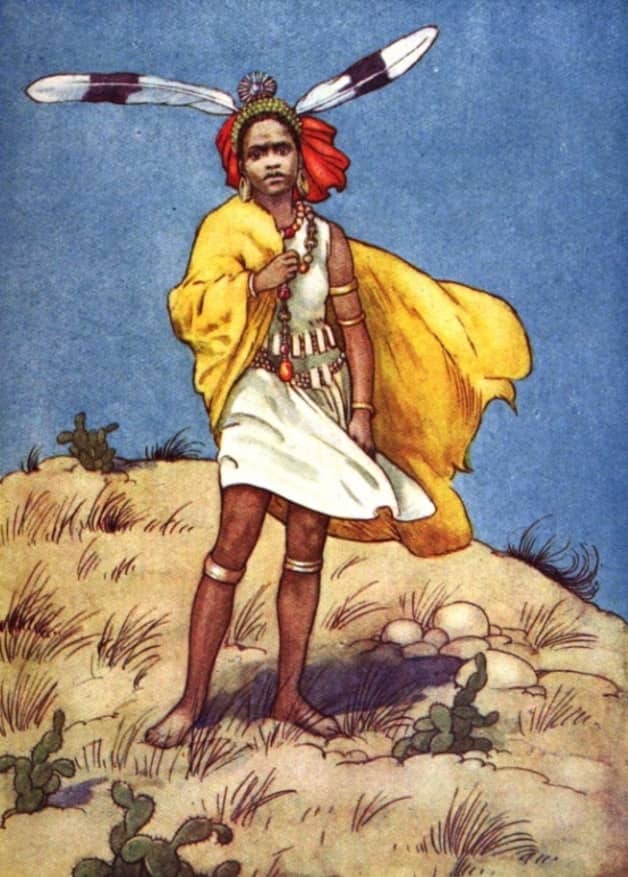 “The Daughter of the Sword.” Illustration by Helen Jacobs, published in Native Fairy Tales of South Africa by Ethel L. McPherson (1919), Harrap.

And the Daughter of the Sword looked forward to the day when such honour should be done to her.

The years passed, and the Princess grew to be a fair and stately maiden. When she had reached her full stature she went far out on to the veld with her damsels, and having chosen the place of her sojourn, she bade them go back to the village and tell her father to send the cattle according to his promise.

The King, well pleased, ordered his men to drive twenty oxen into the presence of his daughter, but when they approached, the Princess looked disdainfully upon them and said: “I see nothing.”

The men returned to the King, who bade them once more go into his daughter’s presence and take with them forty head of cattle. But the Daughter of the Sword refused to look upon them, saying again, “I see nothing.”

The King, who rejoiced in the pride of his daughter, now ordered a hundred oxen to be driven from the kraals, but the Princess still wore the same high look as before, and pointing upward said: “There is the globe of the sun, and until it is darkened according to the saying of my father, I will never return to my home.”

It was in vain that the King sought to satisfy her. From far and near he sent forth his men to lay tribute upon the people, and though the oxen now numbered many thousands they were rejected by the Princess.

At last he levied a great army and bade the warriors go far beyond the bounds of his kingdom and bring in all the cattle from the neighbouring lands.

The army went forth, and it came to pass that after many days the hosts came to a green and fertile valley where many thousands of cattle were grazing. The hides of the beasts were smooth and sleek, and their branching horns glistened in the sunlight. It was a goodly sight, for in that valley lay the wealth of one mightier than the father of the haughty Princess.

The warriors went stealthily to the far end of the valley, and with shouting and with blows from their spears they began to drive forth the frightened beasts.

But a voice from the heights called out: “To whom belong these cattle which you are driving away?”

And looking up, they saw stretched upon the hills a huge monster, the Lord of the Cattle, whose form was so mighty that upon it grew vast forests, and so great was his length that whole countries lay upon his back. In some of these lands it was early harvest, while in others it was winter. But, laughing, the warriors cried, “Out upon you, you hairy beast,” and with blows from their spears they drove the frightened multitude across the plains to where abode the Daughter of the Sword. Their coming was heralded by a noise like thunder, and the dust of their hoofs rose in a mighty cloud which darkened the face of the sun.

“Behold now!” cried the King’s daughter, “the promise of my father is fulfilled,” and her heart was satisfied.

In honour of the Princess multitudes of cattle were slain, and when the warriors had eaten their fill, there was still food for the vultures and the crows which came flocking to devour the remainder of the carcasses.

In their exultation the warriors said nothing to the King about the monster which lay upon the hills, nor did they tell him that he had challenged them for carrying away his cattle.

The feastings and rejoicings over, the Daughter of the Sword remained in the hut with her mother and little sister. It was now the time of harvest, and one day when all the people of the village had gone forth to work on the land she and her sister were left alone, and while they lay resting in the heat of noon the ground beneath their feet was shaken as if by an earthquake, and there was a rumbling as of thunder. But fear did not enter their hearts, for in their veins ran the blood of princes.

The younger girl rose and went forth to see what had happened, and there at the entrance to the village stood the monster, the Lord of the Cattle, whose feet had broken down the fence.

She made haste to return to her sister, crying, “Child of the King! At the gateway there stands a mighty monster, mightier than any beast which I have seen, and he has broken down the fence which surrounds the village.”

Even as she spoke two leaves blown from a tree growing on the back of the monster fluttered into the hut, and bade the younger Princess go to the spring and draw water. The girl, wondering at the command from such strange messengers, took a jar and went to the stream, but when it was filled and she would have returned to the hut, her feet were rooted to the ground, and she could not withdraw them.

Meanwhile the Leaves had addressed the Daughter of the Sword, bidding her go to a neighbouring hut and fill a jar with water. At first the Princess haughtily refused to do their bidding, but when they commanded her a second time she rose and went, although her heart was filled with anger that she, a royal princess, should be compelled to obey.

She returned with a jar full of water, and the Leaves now bade her light a fire, grind the corn, and bake the bread.

It was in vain that she protested that she, a King’s daughter, knew not how to do such humble work. “Look, my nails are long,” said she, showing them her hands, which were the hands of idleness.

Then one of the Leaves took a knife and pared her nails, and raising one of the grindstones, showed her how to grind the corn.

So with anger in her heart the Daughter of the Sword ground the corn and baked the bread, and when it was ready, at the bidding of her new masters, she filled large baskets with food and poured thick milk into a calabash, and when all was ready the Leaves bade her carry the bread and the calabashes to the gate of the village where the monster was waiting.

But the Princess answered haughtily, “How can I carry the load of three men?”

“We will help you,” replied the Leaves, and they bore the milk and bread to the monster, who opened his huge jaws and swallowed all that there was in the twinkling of an eye.

Then the Leaves returned to the hut and despoiled it of everything that was in it—the water-vessels, the sleeping-mats and the skins—and took them to the monster, who devoured all that they placed before him.

Then they ranged through the village, robbing the huts of all that was within them, and these things, too, the monster swallowed.

Next at their command, the Daughter of the Sword arrayed herself in her petticoat adorned with beads and decked herself with her necklace of brass and with her bracelets and her armlets, and went to where the monster stood at the gate of the ravaged village.

“Climb up on to my back,” he commanded, and the Princess obeyed.

Now the little sister, whose feet were rooted to the ground on the river-bank, felt her sister’s departure, and at that moment her feet were loosened, and she ran to her mother who was busy in the harvest fields, crying, “My sister, the Daughter of the Sword, has gone 1 In my heart I felt her departure.”

The mother ran back to the village. Everywhere she sought her daughter, looking into all the huts which had been despoiled, but nowhere did she find her child.

Her tears fell like rain, and she hastened back to the fields, saying to the harvesters: “My child has been carried away by the monster who was plundered of his cattle.”

Then the men armed themselves and followed the spoor of the great beast till they came upon it, where it stood waiting for them.

At the sight of the warriors the Lord of the Cattle laughed, and said: “Do what you will do quickly that I may go, for the sun has set already.”

Then one after another the men hurled their spears against the monster’s side, but they hurled them in vain. Some struck against a rock and were turned aside, some sank harmlessly into the grass, while others splashed into a pool.

The monster was unhurt, but because of the weeping of the mother and the little sister, the Lord of the Cattle allowed the Daughter of the Sword to descend from his back and take farewell of them. He would not, however, allow her to remain long with them, and ordered her once more to mount upon his back.

Then he began to mock the people who had followed him, and with steps that shook the earth he crashed forward through the bush till those who followed could go no farther for weariness.

The Lord of the Cattle journeyed with the Princess till he came to a cave, where he bade her alight. In the cave she found a pillow, a sleeping-mat, some bread, and a jar of water. Here he left her, saying, “I am avenged, for I have spoiled your father. He would have received many head of cattle when your bridegroom claimed you, but now he will never see you again. He robbed me of many cattle, and now in my turn I have spoiled him.”

And the Daughter of the Sword remained where he had left her, and there befell her many strange adventures which are written in the hearts of her people.

The Cake Shop on the Wooden Bridge

The Cake Shop on the Wooden Bridge