There was once a King of Egypt who had no son for many years. But when he prayed to the gods to give him a son and heir they listened to him. Now the Seven Sacred Cows, the Hathors, who knew what would happen to every child in his future life, came to greet the babe at his birth, and said that his fate would be to die either through a crocodile, a serpent, or a dog.

The people who were tending the child went at once and repeated to the King what the Hathors had foretold. His Majesty was terribly grieved at the sad news, and became full of trouble. So he gave orders that the child should be shut up in a fine house in the country. Many servants were to wait on him, and every kind of good thing for which he asked was to be his, but he was not to be allowed to go out among other people, lest one of his three dooms should over take him.

Now when the child was nearly grown up he was standing on the roof of the house, and saw a dog following a person who was walking along the road. He said to the servant who was with him, “What is that which follows the person going along the road?” The servant replied, “That is a dog.” The young Prince said, “Let one like it be brought to me.”

The servant told His Majesty the King of these things. His Majesty said, “Let there be got for him a boar hunting dog to run before him.” So the Prince became the owner of a beautiful dog.

But when the Prince was quite grown up he wearied of his palace prison, and sent to his father, saying, “Why should I remain shut up for ever? I am doomed to die by one of three deaths. Let God do whatsoever pleases Him.” His Majesty the King had married another wife, and she did not at all wish the Doomed Prince to be kept safe from his fate. She hated the Prince, and urged the King to listen to his message and send him forth to meet whatever was in store for him.

So a messenger was sent from the King to the Doomed Prince, ordering him not only to leave the house, but to leave his native land. The man led the Prince out of Egypt to the land that lies upon the north-east, and said to him, “Go now wherever thou wilt. Thou art thine own master.”

The Prince set out upon his travels, and his faithful boar- hound followed after him. At last the Prince reached the land of a prince of Mesopotamia. This prince had an only daughter and no son. He had built a high house for her, and had placed her window many cubits distant from the ground. Then he sent for all the princes of Syria and said to them, “Whoever can climb to my daughter’s window shall marry her.”

Many royal youths came and tried to scale the wall, but none succeeded. As they were engaged in their daily efforts to reach the Princess’s window, up rode the Doomed Prince from Egypt. They welcomed him hospitably, took him into their house, washed him, and gave fodder to his horse. They did every pleasant thing possible for the Prince: they lodged him, they shod his feet, they brought him to their table. The princes said to him, “Whence comest thou, thou good youth?” He replied, “I am the son of one of the horsemen of Egypt. My mother died and my father took another wife, a stepmother. Thereupon she hated me, and I fled before her.”

Then he fell silent and the youths kissed him and com forted him and told him about the daughter of the Prince of Mesopotamia. They went to climb according to their custom every day, and the Doomed Prince stood afar off and watched them. The Princess’s maid stood upon the roof of the tower and watched them also, and noticed the Doomed Prince. One day the youth joined in their efforts to climb to the window of the Princess. He not only outstripped them, but reached her window, and she drew him into her room. She loved him as soon as she saw him, and kissed and embraced him.

Someone ran to congratulate her father, and said, “A man has scaled the wall of the tower and reached thy daughter’s window.” The Prince replied, “Which prince is it?” But they answered, “It is the son of a horseman who has run away from Egypt from an angry stepmother.” Then the father of the Princess grew exceedingly wroth and said, “How can I give my daughter to a runaway from Egypt? Let him go back again.”

So his messengers went forth from his presence and said to the youth, “Go back to the place whence thou earnest.” But the Princess loved him and would not let him go. She wept and would not be comforted, saying, “By the name of Horus the Sun God, if I may not keep him with me I will neither eat nor drink.” A messenger went to the Prince and told him that his daughter was on the point of death, and would neither eat nor drink. He became even more angry and sent men to slay the youth.

But the Princess swore a great oath and said, “By the Sun ! if he is slain I will die too. I will not pass an hour of life without him.” A messenger ran with all speed to her father and told him these things. He ordered the youth to be brought before him, and when the Prince saw the youth he too loved him. He embraced him and kissed him, and said to him, “Behold, thou art unto me even as my own son.” The Prince replied, “I am the child of a horseman in the land of Egypt. My mother died and my father took another wife. She hated me and I ran away before her.”

The Prince gave the Doomed Prince his daughter as a wife, and he gave them a handsome establishment and many servants. All this time the faithful boarhound had remained with the Prince. One day the latter said to his wife, “The Seven Hathors doomed me at my birth to die by a crocodile, a serpent, or a dog.”

Then his wife begged him to take every precaution possible, and she said the faithful boarhound must die. But her husband would not listen, and said, “I will not cause my dog to be killed. How could he do me any harm?”

Later the Prince journeyed to Egypt, and was out catching birds when a crocodile came out to him. Fortunately there was with the youth a giant, who caught the crocodile and shut it up so that the Prince escaped his first doom. The giant did not kill the crocodile, for it was a sacred one.

Some time after this there had been a feast in the youth’s house and he was weary. He lay down on his mat and sleep overcame him. His wife sat near him watching. A serpent came from a hole to bite the youth, but the wife called the servants and they brought drugged wine for the serpent, who drank greedily and lay down overcome by the wine. Then the woman killed it and threw it into the bath. She awoke her husband, and told him all that had passed. She said, “Behold! thy God hath given one of thy dooms into my hand.” Then the youth gave thank-offerings to the gods and worshipped them. 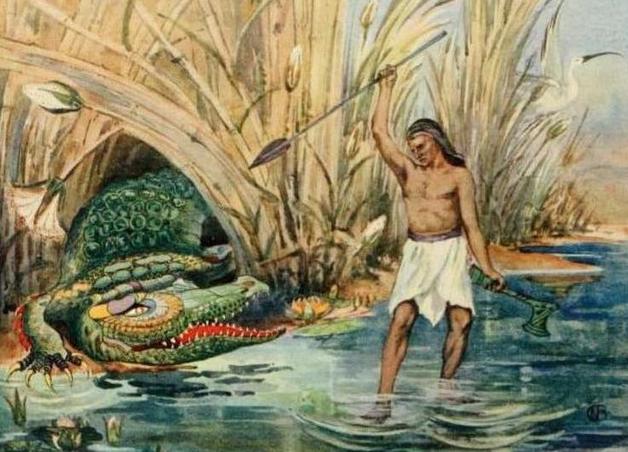 “I am thy doom, following after thee.” Illustration by Constance Baikin, published in Wonder Tales of the Ancient World by Rev. James Baikie (1915), A & C. Black.

Shortly afterwards the youth went to walk some distance from his house, and his dog was following him. The crocodile came up and said to him, “I am thy doom, I will remember thee. I will follow after thee.”

But the dog brought him to where the giant was, so the Doomed Prince was saved again.

The Old Woman and the Cat

The Old Woman and the Cat