Fairytalez.com » Parker Fillmore » The Enchanted Grouse: The Story of Helli and the Little Locked Box

There was once an old couple who lived with their married son and his wife. The son’s name was Helli. He was a dutiful son but his wife was a scold. She was always finding fault with the old people and with her husband and for that matter with everybody else as well.

One morning when she saw her husband taking out his bow and arrows she said:

“Where are you going now?”

“Isn’t that just like you!” she cried. “You’re going off to have a good time hunting and you don’t give a thought to me who have to stay home alone with two stupid old people!”

“If I didn’t go hunting,” Helli said, “and shoot something, we’d have nothing to put in the pot for dinner and then you would have reason to scold.”

At that the woman burst into tears.

“Of course, as usual blame me! Whatever happens it’s my fault!”

Poor Helli hurried off, hoping that by the time he returned his wife would be in a calmer state of mind. He had small success with his hunting. He shot arrow after arrow but always missed his mark. Then when he had only one arrow left he saw a Grouse standing in some brushwood so near that there was little likelihood of his missing it.

He took good aim but before he could fire the Grouse said:

Helli paused, then he shook his head.

“I’ve got to shoot you for we’ve nothing to put in the pot for dinner.”

Again he aimed his arrow and again the Grouse said:

For the second time Helli paused.

“I’d like to spare you,” he said, “but what would my wife say if I came home empty-handed?”

He took aim again and a third time the Grouse said:

At that Helli dropped his arrow.

“I don’t care what she says! I can’t shoot a creature that begs so pitifully for its life! Very well, Mr. Grouse, I’ll do as you say: I’ll take you home alive. But don’t blame me if my wife wrings your neck.”

He took the Grouse up in his arms and started homewards.

When they reached home and Helli’s wife saw the Grouse, she cried out petulantly:

“Is that all you’ve got and out hunting all morning! That won’t be dinner enough for four!”

“This Grouse isn’t to be killed,” Helli announced. “I’m going to keep it for a year and feed it.”

“It won’t take much to feed a Grouse,” the old man remarked.

But the wife flew into a passion.

“What! Feed a useless bird when there isn’t enough to feed your own flesh and blood!”

But Helli was firm and despite her threats his wife did not dare to maltreat the Grouse.

At the end of a year the Grouse grew a copper feather in its tail which it dropped in the dooryard. Then it disappeared.

But the next day the Grouse returned.

“Feed me for another year,” it said to Helli, “and I’ll reward you.”

His wife raised an awful to-do over this, but Helli was firm and for another year he fed and petted the Grouse.

At the end of the second year the Grouse grew a silver feather in its tail which it dropped in the dooryard. Then it disappeared.

“One silver feather!” Helli’s wife cried. “So that’s all you get for feeding that thankless bird a whole year! And now it’s escaped!”

But it hadn’t. It returned the very next day.

“Feed me for another year,” it said to Helli, “and I’ll reward you.”

At the end of the third year the Grouse grew a golden feather in its tail and when it dropped that in the dooryard the scolding wife hadn’t so much to say, for a golden feather was after all pretty good pay for a few handfuls of grain.

For a day the Grouse disappeared and then when it returned it said to Helli:

“Get on my back and I’ll reward you.” 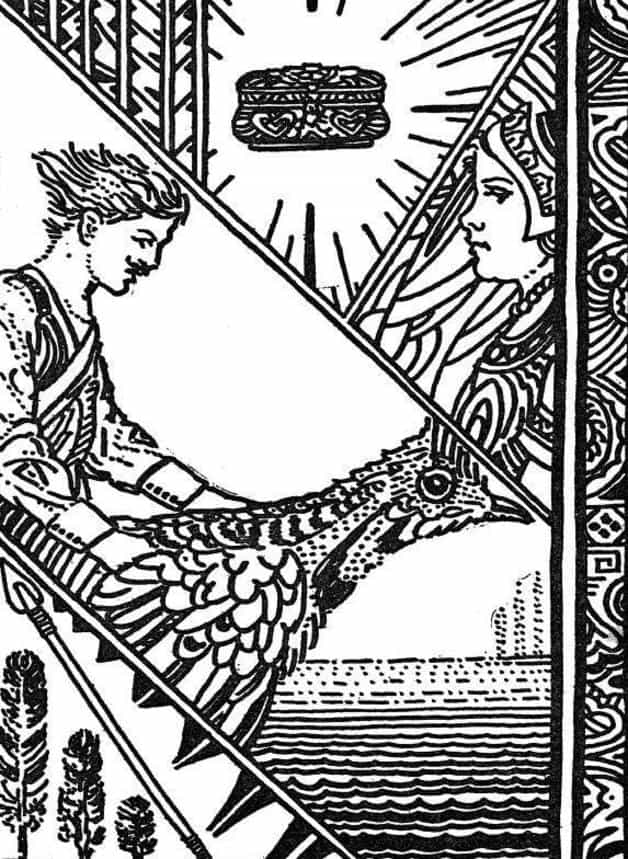 “On it flew until it reached the broad ocean.” Illustration by Jay Van Everen, published in Mighty Mikko: A Book of Finnish Fairy Tales and Folk Tales by Parker Fillmore (1922), Harcourt, Brace and Company.

Helli did so and the Grouse, rising high in the air, flew far away. On, on it flew until it reached the broad Ocean. Over the Ocean it flew until Helli could see nothing but water in whatever direction he looked.

As he spoke, the Grouse slipped from beneath him and he fell down, down, down. However, before he touched water the Grouse swooped under him and caught him up again high into the air. He had this same terrible experience a second time and a third time and each time he thought his last moment had arrived.

“Now,” the Grouse told him, “you know what my feelings were when you threatened three times to shoot me with your arrow.”

“You have taught me a lesson,” Helli said.

After that the Grouse flew on and on. At last it said:

“Look straight ahead, master, and tell me what you see.”

“Far, far ahead I see what looks like a copper column.”

“Good!” the Grouse said. “That is the home of my oldest sister. She will be overjoyed to see us and when she hears how you have spared my life she will want to make you a present and will offer you various things. Take my advice and tell her that the only thing you want is her little locked box the key to which is lost. If she won’t give you that, accept nothing.”

The Grouse’s oldest sister received them most hospitably and when she had heard their story at once offered Helli anything he might like from among her treasures.

“Then give me your little locked box the key to which is lost,” Helli said.

The oldest sister shook her head.

“My little locked box! Who told you about that? I’m sorry, but I cannot give you that! Take anything else!”

When the oldest sister could not be prevailed upon to give away her little locked box, the Grouse had Helli mount his back once more and off they flew.

“We’ll visit my second sister now,” he said. “If she offers you a present, ask her for her little locked box without a key and accept nothing else.”

On, on they flew until the oldest sister’s castle was far behind.

“Look, master,” the Grouse said, “look straight ahead and tell me what you see.”

“Far ahead I see something that is like a silver cloud.”

“That,” said the Grouse, “is the silver castle of my second sister.”

At the silver castle the second sister received them with joy and when she heard who Helli was at once declared that she wanted to show him her gratitude by making him a gift.

But when he asked for her little locked box without a key, she cried out:

“But I don’t want anything else!” Helli said.

When the Grouse saw that his second sister was not to be parted from her little locked box, he bade Helli mount his back and off they flew again.

“We’ll go to my youngest sister this time,” he said. “If she offers you a present, ask for the same thing.”

On, on they flew until the silver castle was lost to view.

“Now, master, look ahead and tell me what you see.”

“I seem to see a golden haze like the sun behind a cloud.”

“That is the golden castle of my youngest sister.”

They arrived and the youngest sister threw her arms about the Grouse for she loved him dearly and had not seen him for a long time.

“Welcome, brother!” she said. “And welcome also to you, Helli!”

Then she offered Helli a present and when he asked for her little locked box without a key she gave it to him at once.

“It is my most precious possession,” she said, “but you may have it for you spared my dear brother’s life when you might have taken it.”

After they had rested and feasted they bade the youngest sister farewell and Helli with his precious box held tightly in one hand mounted the Grouse’s back and off they flew towards home.

“Be careful of the box,” the Grouse said, “and don’t let it out of your hands until we reach some beautiful spot where you’d like always to live.”

They passed high mountains and wooded lakes and fertile valleys.

At last they reached home and the Grouse told Helli that now they must part forever.

“By sparing my life three times,” the Grouse said, “and then feeding me for three years you have broken the enchantment that bound me and now I shall not have to go about any longer as a grouse but shall be able to resume my natural shape. Farewell, Helli, and when you find the spot where you think you would like always to live, drop the box and you will find you have a treasure that will more than reward you for your kindness to me.”

The Grouse disappeared and Helli said to himself:

“Where do I want to live always but right here at home with my dear old father and mother and my wife who is my wife even if she does scold me sometimes!”

So there at home after they all had supper together, he dropped the box on the floor. It broke and out of it arose a beautiful castle with servants and riches and everything that Helli had always wanted and never had. And Helli and his old father and mother and his wife lived in it and were happy. And gradually his wife got over her habit of scolding for when you’re happy you haven’t anything to scold about.

The Forest Bride: The Story of a Little Mouse Who Was a Princess

Prev Story The Terrible Olli: The Story of an Honest Finn and a Wicked Troll
Next Story

The Forest Bride: The Story of a Little Mouse Who Was a Princess

Prev Story The Terrible Olli: The Story of an Honest Finn and a Wicked Troll
Explore our fairy tale collections on