Fairytalez.com » Clara Stroebe » The Girl and the Snake

Once upon a time there was a girl who was to go to the wood and drive the cattle home; but she did not find the herd, and losing her way instead, came to a great hill. It had gates and doors and she went in. There stood a table covered with all sorts of good things to eat. And there stood a bed as well, and in the bed lay a great snake. The snake said to the girl: “Sit down, if you choose! Eat, if you choose! Come and lie down in the bed, if you choose! But if you do not choose, then do not do so.”

So the girl did nothing at all. At last the snake said: “Some people are coming now who want you to dance with them. But do not go along with them.”

{Listen to The Girl and the Snake plus hundreds of other fairy tale audiobooks in the Fairytalez Audiobook App for Apple and ttps://play.app.goo.gl/?link=https://play.google.com/store/apps/details?id=com.fairytalez&referrer=utm_source=fairytalez&utm_medium=cta&utm_campaign=ft_audio_book_app&utm_content=ABA-Ltop-CTA-android-app>Android devices}

Straightaway people arrived who wanted to dance with the girl; but she would hear nothing of it. Then they began to eat and drink; but the girl left the hill and went home. The following day she again went to the wood to look for the cattle, did not find them, lost her way again, and came to the same hill. This time she also entered, and found everything as it had been the first time, the well-spread table and the bed with the snake in it.

And the snake said to her, as before: “Sit down, if you choose! Eat, if you choose! Come, and lie down in the bed if you choose! But if you do not choose, then do not do so! Now a great many more people are coming who will want to dance with you, but do not go with them.”

The snake had scarcely concluded before a great many people arrived, who began to dance, eat and drink; but the girl did not keep them company, instead she left the hill and went home. 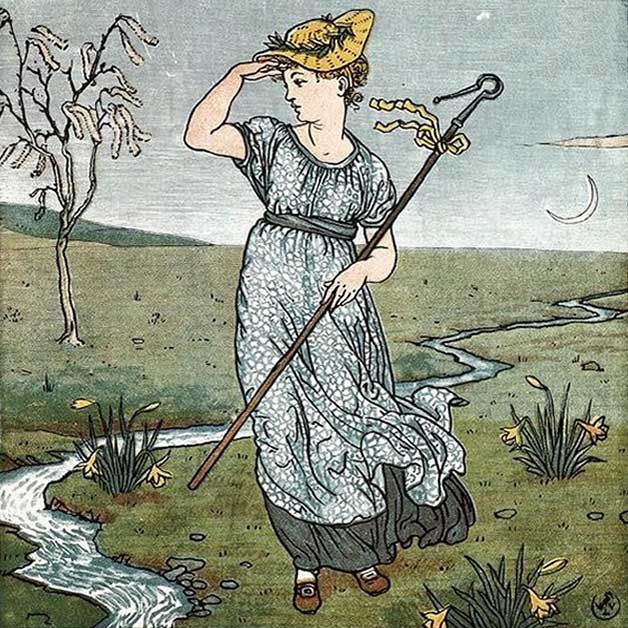 On the third day when she once more went to the wood, everything happened exactly as on the first and second day. The snake invited her to eat and drink, and this time she did so, with a hearty appetite. Then the snake told her to lie down beside him and the girl obeyed. Then the snake said: “Put your arm about me!”

She did so. “And now kiss me,” said the snake, “but if you are afraid, put your apron between us.”

The girl did so, and in a moment the snake was turned into a marvellously handsome youth, who was really a prince, bewitched in the form of a snake by magic spells, and now delivered by the girl’s courage. Then both of them went away and there was nothing further heard of them.