Once upon a time there was a widow who had a beautiful daughter. The mother was modest and humble; the daughter, Marienka, was pride itself. She had suitors from all sides, but none satisfied her; the more they tried to please her the more she disdained them.

One night, when the poor mother could not sleep, she took her beads and began to pray for her dear child, who gave her more than one care. Marienka was asleep by her side. As the mother gazed lovingly at her beautiful daughter, Marienka laughed in her sleep. 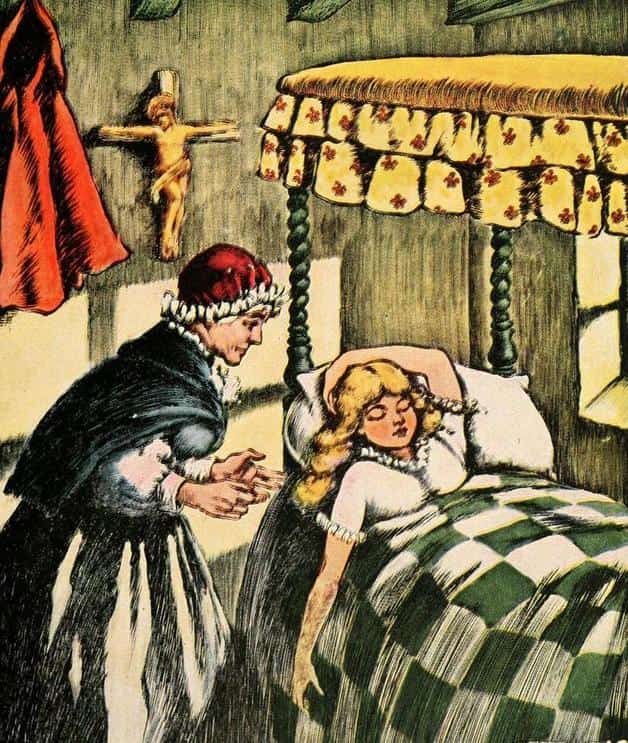 “As the mother gazed lovingly at her beautiful daughter, Marienka laughed in her sleep.” Illustration by Edward McCandlish, published in Laboulaye’s Fairy Book (1920), Harper.

“What a beautiful dream she must have to laugh in this way!” said the mother. Then she finished her prayer, hung her beads on the wall, laid her head on the same pillow with her daughter, and fell asleep.

“My dear child,” said she in the morning, “what did you dream last night that you laughed so?”

“What did I dream, mamma? I dreamed that a nobleman came here for me in a copper coach, and that he put a ring on my finger set with a stone that sparkled like the stars. And when I entered the church the people had eyes for no one but the blessed Virgin and me.”

“My daughter, my daughter, that was a proud dream!” said the mother, shaking her head. But Marienka went out singing.

The same day a wagon entered the yard. A handsome young farmer in good circumstances came to ask Marienka to share a peasant’s bread with him. The mother was pleased with the suitor, but the proud Marienka refused him, saying, “Though you should come in a copper coach, and put a ring on my finger set with a stone that sparkled like the stars, I would not have you for a husband.” And the farmer went away storming at Marienka’s pride.

The next night the mother waked, took her beads, and prayed still more earnestly for her daughter, when, behold! Marienka laughed again as she was sleeping.

“I wonder what she is dreaming,” said the mother, who prayed, unable to sleep.

“My dear child,” she said the next morning, “what did you dream last night that you laughed aloud?”

“What did I dream, mamma? I dreamed that a nobleman came here for me in a silver coach, and that he offered me a golden diadem. And when I entered the church the people looked at me more than they did at the blessed Virgin.”

“Hush! you are blaspheming. Pray, my daughter, pray that you may not fall into temptation.”

But Marienka ran away to escape her mother’s sermon.

The same day a carriage entered the yard. A young lord came to entreat Marienka to share a nobleman’s bread with him.

“It is a great honor,” said the mother; but vanity is blind.

“Though you should come in a silver coach,” said Marienka to the new suitor, “and should offer me a golden diadem, I would not have you for a husband.”

“Take care, my child,” said the poor mother; “pride is a device of the Evil One.”

“Mothers never know what they are saying,” thought Marienka, and she went out shrugging her shoulders.

The third night the mother could not sleep for anxiety. As she lay awake, praying for her daughter, behold! Marienka burst into a loud fit of laughter.

“Oh!” said the mother, “what can the unhappy child be dreaming now?” And she continued to pray till daylight.

“My dear child,” said she in the morning, “what did you dream last night?”

“You will be angry again if I tell you,” answered Marienka.

“I dreamed that a noble lord, with a great train of attendants, came to ask me in marriage. He was in a golden coach, and he brought me a dress of gold lace. And when I entered the church, the people looked at nobody but me.”

The mother clasped her hands. Marienka, half dressed, sprang from the bed and ran into the next room, to avoid a lecture that was tiresome to her.

The same day three coaches entered the yard, one of copper, one of silver, and one of gold; the first drawn by two horses, the second by four, and the third by eight, all caparisoned with gold and pearls. From the copper and silver coaches alighted pages dressed in scarlet breeches and green jackets and cloaks, while from the golden coach stepped a handsome nobleman all dressed in gold. He entered the house, and, bending one knee on the ground, asked the mother for her daughter’s hand.

“What an honor!” thought the mother.

“My dream has come to pass,” said Marienka. “You see, mother, that, as usual, I was right and you were wrong.”

She ran to her chamber, tied the betrothal knot, and offered it smilingly as a pledge of her faith to the handsome lord, who, on his side, put a ring on her finger set with a stone that sparkled like the stars, and presented her with a golden diadem and a dress of gold lace.

The proud girl ran to her room to dress for the ceremony, while the mother, still anxious, said to the bridegroom, “My good sir, what bread do you offer my daughter?”

“Among us,” said he, “the bread is of copper, silver, and gold. She can take her choice.”

“What does this mean?” thought the mother. But Marienka had no anxiety; she returned as beautiful as the sun, took her lover’s arm, and set out for the church without asking her mother’s blessing. The poor woman was left to pray alone on the threshold; and when Marienka returned and entered the carriage she did not even turn round to look at her mother or to bid her a last farewell.

The eight horses set off at a gallop, and did not stop till they reached a huge rock in which there was a hole as large as the gate of a city. The horses plunged into the darkness, the earth trembled, and the rock cracked and crumbled. Marienka seized her husband’s hand.

“Don’t be alarmed, my fair one; in a moment it will be light.”

All at once a thousand lights waved in the air. The dwarfs of the mountain, each with a torch in his hand, came to salute their lord, the King of the Mines. Marienka learned for the first time her husband’s name. Whether he was a spirit of good or of evil, at least he was so rich that she did not regret her choice.

They emerged from the darkness, and advanced through bleached forests and mountains that raised their pale and gloomy summits to the skies. Firs, beeches, birches, oaks, rocks, all were of lead. At the end of the forest stretched a vast meadow the grass of which was of silver; and at the bottom of the meadow was a castle of gold, inlaid with diamonds and rubies. The carriage stopped before the door, and the King of the Mines offered his hand to his bride, saying, “My fair one, all that you see is yours.”

Marienka was delighted. But it is impossible to make so long a journey without being hungry; and it was with pleasure, therefore, that she saw the mountain dwarfs bring in a table, everything on which glittered with gold, silver, and precious stones. The dishes were marvelous—side-dishes of emeralds, and roasts of gold on silver salvers. Every one ate heartily except the bride, who begged her husband for a little bread.

“Bring the copper bread,” said the King of the Mines.

“Bring the silver bread,” said he.

“Bring the gold bread,” said he, at length.

“My fair one,” said the King of the Mines, “I am very sorry; but what can I offer you? We have no other bread.”

The bride burst into tears. Her husband laughed aloud; his heart was of metal, like his kingdom.

“Weep, if you like,” he cried; “it will do you no good. What you wished for you possess. Eat the bread that you have chosen.”

It was thus that the rich Marienka lived in her castle, dying of hunger, and seeking in vain for a root to allay the torture that was consuming her. God had humbled her by granting her prayer.

Three days in the year, the Rogation Days, when the ground half opens to receive the fruitful rain sent by the Lord, Marienka returns to the earth. Dressed in rags, pale and wrinkled, she begs from door to door, too happy when any one throws her a few crusts, and when she receives as alms from the poor what she lacks in her palace of gold—a little bread and a little pity.

Prev Story The Castle of Life
Next Story