Fairytalez.com » Parker Fillmore » The Little Singing Frog - The Story of a Girl Whose Parents were Ashamed of Her

There was once a poor laborer and his wife who had no children. Every day the woman would sigh and say:

Then the man would sigh, too, and say:

“It would be pleasant to have a little daughter, wouldn’t it?”

At last they went on a pilgrimage to a holy shrine and there they prayed God to give them a child.

“Any kind of a child!” the woman prayed. “I’d be thankful for a child of our own even if it were a frog!”

God heard their prayer and sent them a little daughter—not a little girl daughter, however, but a little frog daughter. They loved their little frog child dearly and played with her and laughed and clapped their hands as they watched her hopping about the house. But when the neighbors came in and whispered: “Why, that child of theirs is nothing but a frog!” they were ashamed and they decided that when people were about they had better keep their child hidden in a closet.

So the frog girl grew up without playmates of her own age, seeing only her father and mother. She used to play about her father as he worked. He was a vine-dresser in a big vineyard and of course it was great fun for the little frog girl to hop about among the vines.

Every day at noontime the woman used to come to the vineyard carrying her husband’s dinner in a basket. The years went by and she grew old and feeble and the daily trip to the vineyard began to tire her and the basket seemed to her to grow heavier and heavier.

“Let me help you, mother,” the frog daughter said. “Let me carry father’s dinner to him and you sit home and rest.”

So from that time on the frog girl instead of the old woman carried the dinner basket to the vineyard. While the old man ate, the frog girl would hop up into the branches of a tree and sing. She sang very sweetly and her old father, when he petted her, used to call her his Little Singing Frog.

Now one day while she was singing the Tsar’s Youngest Son rode by and heard her. He stopped his horse and looked this way and that but for the life of him he couldn’t see who it was who was singing so sweetly.

“Who is singing?” he asked the old man.

But the old man who, as I told you before, was ashamed of his frog daughter before strangers, at first pretended not to hear and then, when the young Prince repeated his question, answered gruffly:

“There’s no one singing!”

But the next day at the same hour when the Prince was again riding by he heard the same sweet voice and he stopped again and listened.

“Surely, old man,” he said, “there is some one singing! It is a lovely girl, I know it is! Why, if I could find her, I’d be willing to marry her at once and take her home to my father, the Tsar!”

“I mean what I say!” the Prince declared. “I’d marry her in a minute!”

“Are you sure you would?”

The old man looked up into the tree and called:

“Come down, Little Singing Frog! A Prince wants to marry you!”

So the little frog girl hopped down from among the branches and stood before the Prince.

“She’s my own daughter,” the laborer said, “even if she does look like a frog.”

“I don’t care what she looks like,” the Prince said. “I love her singing and I love her. And I mean what I say: I’ll marry her if she’ll marry me. My father, the Tsar, bids me and my brothers present him our brides to-morrow. He bids all the brides bring him a flower and he says he’ll give the kingdom to the prince whose bride brings the loveliest flower. Little Singing Frog, will you be my bride and will you come to Court to-morrow bringing a flower?”

“Yes, my Prince,” the frog girl said, “I will. But I must not shame you by hopping to Court in the dust. I must ride. So, will you send me a snow-white cock from your father’s barnyard?”

“I will,” the Prince promised, and before night the snow-white cock had arrived at the laborer’s cottage.

Early the next morning the frog girl prayed to the Sun.

“O golden Sun,” she said, “I need your help! Give me some lovely clothes woven of your golden rays for I would not shame my Prince when I go to Court.”

The Sun heard her prayer and gave her a gown of cloth of gold.

Instead of a flower she took a spear of wheat in her hand and then when the time came she mounted the white cock and rode to the palace.

The guards at the palace gate at first refused to admit her.

“This is no place for frogs!” they said to her. “You’re looking for a pond!”

But when she told them she was the Youngest Prince’s bride, they were afraid to drive her away. So they let her ride through the gate.

“Strange!” they murmured to one another. “The Youngest Prince’s bride! She looks like a frog and that was certainly a cock she was riding, wasn’t it?”

They stepped inside the gates to look after her and then they saw an amazing sight. The frog girl, still seated on the white cock, was shaking out the folds of a golden gown. She dropped the gown over her head and instantly there was no frog and no white cock but a lovely maiden mounted on a snow-white horse!

Well, the frog girl entered the palace with two other girls, the promised brides of the older princes. They were just ordinary girls both of them. To see them you wouldn’t have paid any attention to them one way or the other. But standing beside the lovely bride of the Youngest Prince they seemed more ordinary than ever.

The first girl had a rose in her hand. The Tsar looked at it and at her, sniffed his nose slightly, and turned his head.

The second girl had a carnation. The Tsar looked at her for a moment and murmured:

“Dear me, this will never do!”

Then he looked at the Youngest Prince’s bride and his eye kindled and he said: 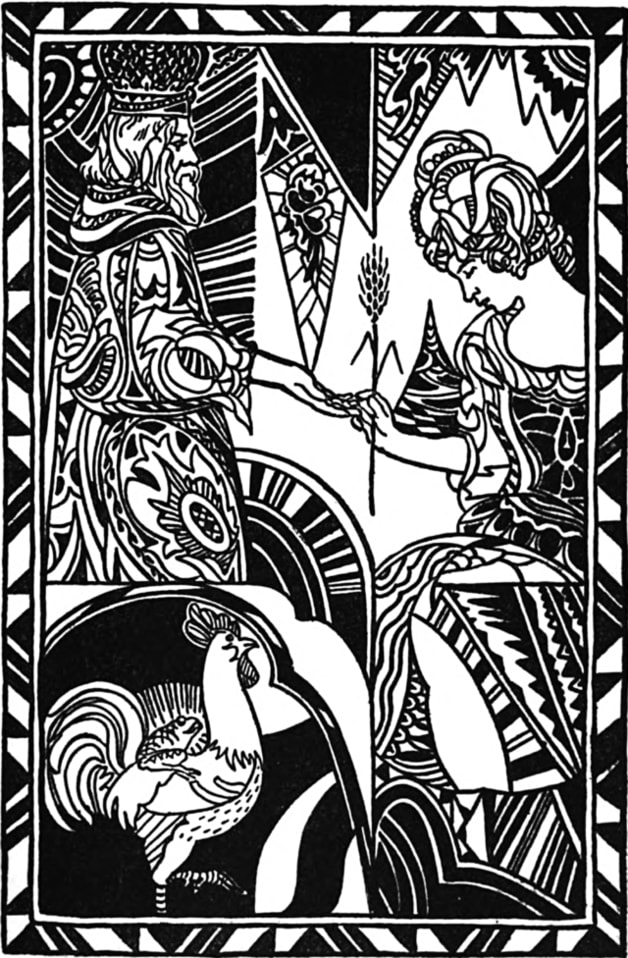 “This, the bride of the youngest prince, is my choice.” Illustration by JaY Van Everen, published in The Laughing Prince: Jugoslav Folk and Fairy Tales by Parker Fillmore (1921), Harcourt, Brace and Company.

She gave him the spear of wheat and he took it and held it aloft. Then he reached out his other hand to her and had her stand beside him as he said to his sons and all the Court:

So the little frog girl of whom her parents were ashamed married the Youngest Prince and when the time came wore a Tsarina’s crown.