In those far-off days, before Glooskap, the mighty Magician, set sail in his stone canoe for the Land of the Red Sunrise, there were Fairies and Elves living in the green forests of the Wabanaki. Very wonderful was the music they made on magic flutes of reed, and with their melody they could charm men and beasts.

When these Fairies were pleased with an Indian brave they gave him a magic flute. And if they grew to love him, they made him a Fairy like themselves, and called him a Mikumwess.

Now, in those far-off days there dwelt two youths in a village of the Wabanaki. One, whose name was Little Thunder, was full of laughter and song, and wished greatly to meet the Fairies and be made a Mikumwess.

The other youth, who was called the Badger, loved Brown Fawn, the beautiful daughter of a great Chief. The Badger wished to have her for his wife, but he heard that her father was a cruel  man, and set such difficult tasks for his daughter’s suitors, that they all perished in attempting them.

One day a Loon came to the village of the Wabanaki where dwelt these two young men. It was Glooskap’s messenger, and it said that the mighty Magician had promised to grant one wish to each Indian youth who would seek his magic lodge.

When Little Thunder and the Badger heard this, they decked themselves with their choicest feathers, and, armed with strong bows and arrows, they set out along the trail that led to Glooskap’s lodge. Dangerous was this trail, and filled with terrors, but the two hastened bravely on, overcoming all in their way.

For seven years they travelled, until at last they reached the lodge. Glooskap, smiling, welcomed them, and Martin the Fairy set food and drink before them. Then Glooskap asked what they most desired.

“Make me a Mikumwess,” said Little Thunder, “then I may help my brother the Badger to win his bride.”

“All I desire is to win Brown Fawn for my wife,” replied the Badger, “for I am lonely in my lodge.”

Then Glooskap smiled again, and he wove a magic hair-string in Little Thunder’s locks, and the young man became a Mikumwess endowed with Fairy power. After this Glooskap gave him a magic flute of reed so that he might charm all living things.

But to the Badger, Glooskap, said: “The maiden is yours to win with the aid of this Mikumwess. Enter my stone canoe, and sail over the seas, to the lodge of her father. Only return the canoe to me when your adventure is over, for never before did I lend it to any man.”

Then Glooskap took the two youths to the seashore, and pointed to a small island of granite against which the foaming waves were beating. It was covered with high Pines around whose tops flew many white Gulls. “There is my canoe,” said he. “Swim thither and enter it.”

So the two young men threw themselves into the water, and swam out to the island. As soon as they stepped on its rocks, the island turned into a large stone canoe, and the Pine Trees became high masts.

Rejoicing, the Mikumwess and the Badger sailed away across the seas. They sailed for many days until at last they reached the land where was the village of the cruel Chief.

They drew the stone canoe up on the beach, and hid it under some bushes. Then they entered the village and sought the lodge of the Chief. He welcomed them gravely, and placed them in the seat of honour. After which he asked them what was their errand.

The Mikumwess answered: “This, my brother the Badger, is tired of living alone. Give him Brown Fawn to follow him to his lodge.”

“Brown Fawn may go with him,” answered the Chief courteously, “if to-morrow he brings me the head of the Yellow Horned Serpent that dwells in the great cave by the sea.”

To this the young men agreed, and were given a lodge to sleep in.

When the night was very dark, the Mikumwess arose, and, leaving the Badger asleep, went alone to the great cave by the sea. Across its entrance he laid a log, and then began to dance a magic dance before it, playing on his Fairy flute. 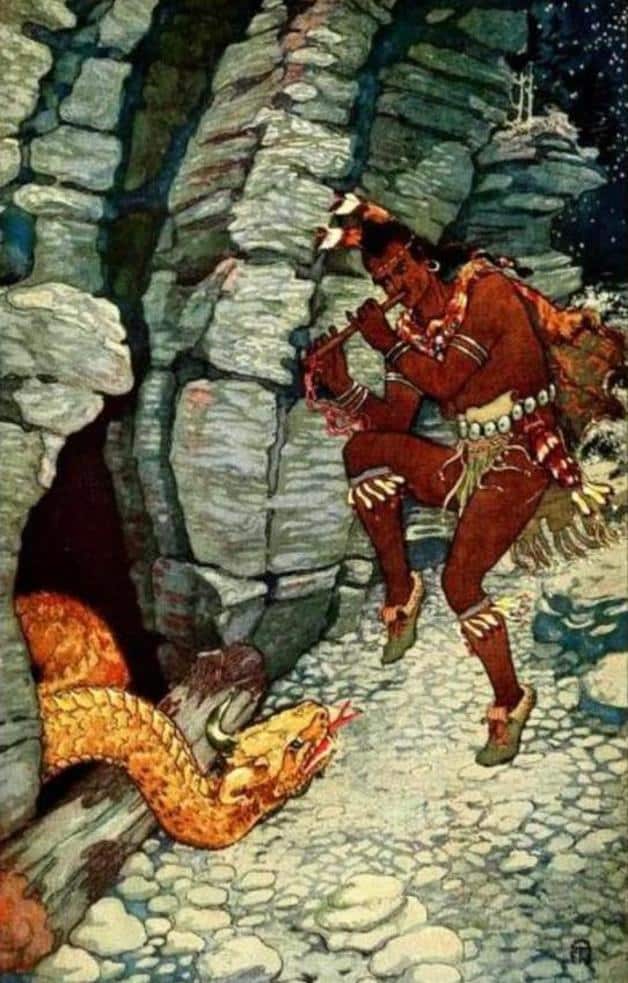 “When the Yellow Horned Serpent heard the strange music, he was charmed.” Illustration by Frederick Richardson, published in The Red Indian Fairy Book by Frances Jenkins Olcott (1917), Houghton and Mifflin Company.

When the Yellow Horned Serpent heard the strange music, he was charmed, and came creeping out, waving his head from side to side. Then he rested his head on the log, and the Mikumwess quickly cut it off with his hatchet.

Taking the head by one of its shiny yellow horns, he carried it to the Badger. And when morning was come, the two bore the head and laid it before the Chief.

And when the old man saw it, he was astonished and thought to himself, “I fear I shall lose my child!”

But he said to the Badger, “Young man, if you wish to win your wife, you must coast down yonder hill with two of my bravest warriors.”

Now, the hill was really a very high mountain, its sides jagged with broken rocks and terrible with tree-roots and ice. Two sleds were brought and taken to the top of the mountain; and the Mikumwess and the Badger were placed upon one, and on the other were seated two powerful Magicians. At a word from the Chief the two [230] sleds were sent flying down the mountain-side. Faster and faster they flew as if to death.

Soon the Badger went whirling from his sled and fell on the ice, and the Magicians shouted with delight; but they did not know that the Mikumwess had done this so that he might get the Magicians’ sled in front of him.

The Mikumwess turned aside, and, putting out his hand, drew the Badger on the sled, and as he did so, the Magicians shot by, mocking loudly. Then the Mikumwess’s sled suddenly bounded into the air and flew over the heads of the Magicians, nor did it stop at the foot of the mountain, but sped up the hill opposite and struck the side of the Chief’s lodge, ripping it from end to end.

And when the old man saw this, he thought to himself, “This time I feel sure I shall lose my child!”

But he said to the Badger: “There is a man in this village who has never been beaten at running. You must overcome him, if you wish to win your wife.”

To this the young men agreed, and went to the place where the race was to start. And the [231] Mikumwess lent his magic flute to the Badger to give him Fairy power.

And when the racer from the village came, the Badger asked him, “Who are you?”

And the racer answered, “I am the Northern Lights.”

“And I,” said the Badger, “am the Chain Lightning.”

In an instant they were no longer to be seen, but were beyond the distant hills. And the Chief, with the Mikumwess and all the people, sat and waited till noon, when Chain Lightning, who was the Badger, returned. He was not out of breath, nor weary, though he had run all around the world.

But Northern Lights came not. When evening drew near they saw him come quivering and panting with fatigue, yet for all that he had not been around the world, but had been forced to turn back.

And when the old man saw that Chain Lightning had won, he thought to himself, “Alas! This time I have surely lost my child!”

But he said to the Badger, “To win your wife, young man, you must overcome a great warrior who swims and dives so excellently that no one has ever equalled him.”

To this the young men agreed, and the next morning they went to the seashore, where the test was to be. The Mikumwess again lent the Badger his fairy flute.

And when the diver from the village came, the Badger asked him, “Who are you?”

And the diver replied, “I am the Sea Duck.”

And after a short time the Sea Duck rose for breath; but the people who sat there, with the Chief and the Mikumwess, had long to wait for the Loon. Hour after hour passed, but he came not. At last he rose to the surface, and was not out of breath.

And when the old man saw this he groaned and said, “Oh, Badger, I have lost my child!”

Then the wedding-feast was prepared, and the Chief brought Brown Fawn from the lodge and gave her to the Badger. And in the evening  the feast was held and a great dance; and the Mikumwess astonished all who saw him, for he danced a deep trench in the ground around the lodge.

And when the morning was come the Mikumwess, together with the Badger and Brown Fawn, entered the stone canoe, and set sail for the country of the Wabanaki. And when they reached the shore they found Glooskap, the mighty Magician, waiting for them.

And, smiling, he said to the Mikumwess, “Go your way in the forest and join the band of Fairies, and be always happy with your magic flute.”

Then to the Badger he said: “Welcome once more to the Land of the Children of Light. Take your wife, Brown Fawn, and return to your lodge. Plenty of game shall always be yours, and peace and contentment.”

Then the Mikumwess disappeared in the forest; and the Badger, leading Brown Fawn, returned to his lodge in the village of the Wabanaki.

Note: This Native American fairy tale is from the Micmac tribe and originally came from Algonquin Legends of New England.

Prev Story The Christmas Fairy of Strasburg
Next Story