Once upon a time there lived a man named Yang- Tsu. He was a street peddler and for that reason he wandered up and down the streets all day long with the tray which contained his wares hanging from his neck in front of him. As he cried his wares his eyes took in all the wonders of the rich and splendid city. He saw the silk-robed mandarins with their great escorts. He saw the mighty warriors with the shadows of distant adventures darkening their features. And from gold-embroidered, curtained litters the almond fragrance of invisible beauties was wafted to his perspiring face.

All this filled his soul with discontent and envy and longing, and when he came home in the evening he
always would quarrel with Yu-Nu, his wife, for he was restless and excited. And then there would be weeping and wailing half the night long.

One morning when Yu-Nu had again awakened and, looking in her mirror, had seen the little red veins in her eyes, she said to Yang-Tsu:“Go and buy a parasol!”

“Why should I buy a parasol?’’ asked her husband. “Because it is all due to the heat of the sun. Thepowerful sunrays excite you, so that you cannot help  quarreling. Therefore we live unhappily and there are red veins in my eyes.”

Yang-Tsu went about his daily work without making a reply, for he was not a bad man, and he thought
over what his wife had said. He noticed as he went along the street that the sun shone with such power
that the sunrays rose straight up from the pavement, like a glowing golden trellis. “Perhaps she is right,”
thought Yang-Tsu, and he turned his steps toward the artisan’s quarter.

In this quarter there was much noise and shouting, for each merchant sat in front of his shop on a mat, and praised the goods he offered for sale. Suddenly Yang-Tsu heard a shrill voice rise above the others,
which cried: “Buy parasols! An infinite choice! Every one can spread the sky he loves best above his head!”

Yang-Tsu was much surprised to hear these strange words, and went over to the parasol-maker. The latter was a large, serious man. He sat on the cobblestones and round about him lay his parasols. “What is it you keep calling out, most respected maker of parasols?” Yang-Tsu asked him. “Did you say these parasols could spread a heaven above my head? I admit that they are handsome, yet I cannot notice that they are different from any others I have seen.”

The parasol-maker replied with a serious smile: “These parasols only look alike from the outside, most
respected questioner; please deign to open one of them.”

Yang-Tsu raised a parasol from the ground and opened it, and was greatly surprised. For the inner side of the parasol had been painted in such wise that it pictured a summer sky filled with the most tender,
curly little white clouds, and the painting had been so artfully done that it seemed as though one were walking beneath them.

“You see, most respected questioner,” said the parasol-maker, “as long as you carry this parasol, the
radiant summer skies above your head will neverdarken, and beneath their influence your soul always
will be cheerful.”

Yang-Tsu was overjoyed to hear this, yet he cautiously said: “It is true that I need to buy a parasol, for I quarrel every night with my wife Yu-Nu. But that is due to the heat of the sun. Therefore I do not think that a warm summer sky above my head will tend to quiet me.”

“Then choose some other sky,” answered the parasol-maker. “I have the largest selection of skies in the
city.” He opened a second parasol. It showed a dull, misty, winter sky, like shimmering gray silk. The
smoke of distant villages rose on the horizon. “That is the sky of tender melancholy,” said the parasol-maker. “In this melancholy you can live your life long as peacefully as though you were wrapped in the softest wool.”

But Yang-Tsu thought this sky too mournful, and opened a third and then a fourth parasol, and others
beside. There was a morning sky before sunrise, in which all the day’s happenings still glowed in purity before sinking down to the dusty earth. There was one which showed the blue through a wilderness of upright grasses, as though one were lying on one’s back in a meadow, looking dreamily up toward the heavens. Under this parasol it was possible to carry along with one the deep peace of solitude through the noisiest streets. There was another parasol with a nocturnal sky, lighted by a full moon, and from that sky all the songs of lovers hung like clusters of grapes. There also was a parasol with a glassy sky above snow-covered mountain peaks, where no sign of life disturbed the repose of the soul.

Yang-Tsu chose the nocturnal sky with the full moon, and went his way. But the parasol did not bring peaceto his home. The songs of the lovers dripped down from the moon into his soul, and their passion kept him as restless as before. On the third day Yang-Tsu brought back the parasol with the nocturnal sky, and exchanged it for one of quiet meadow solitude. Yet neither did this one help him. Too often he forgot to attend to his work, and when his wife spoke to him he merely started up as though from a dream, sorrowfully. This parasol Yang-Tsu also brought back on the third day. So he kept on exchanging one parasol for another until in the end he had tried them all.

Then the parasol-maker said to Yang-Tsu: “Now that you have tried each and every sky, and none has brought rest to your soul, so that you can live at peace with your wife, I have a single parasol left. Perhaps fate wills that it be of use to you!” 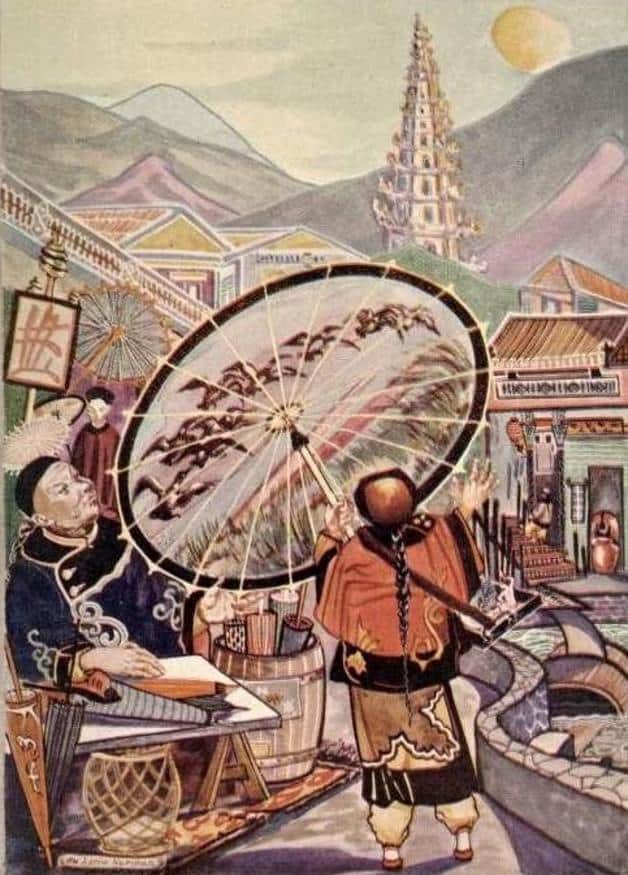 “Across it wild geese flew in the shape of a long wedge.” Illustration by Da Loria Norman, published in Wonder Tales from Far Away by Frederick H. Martens (1924), Robert M. McBride and Company.

The parasol-maker pressed his hands against his knees and rose panting, for he was a very fat man. He
went into his workroom and came back with a parasol which seemed far less handsome than the others. Yang-Tsu opened it and saw a lovely gray autumn evening sky, with a rosy horizon. Across it wild geese flew in the shape of a long wedge. A painful longing took possession of the heart when the eye followed the flight of these wild geese. It was a longing for unknown, unattainable distances. And Yang-Tsu took the parasol along, because he no longer had a choice.

With the autumnal evening sky above his head and the vague and distant, uncertain longing in his heart,
he then wandered through the streets of the city and saw the splendor of the wealthy, the glittering mandarins, the mighty warriors and the gold-embroidered litters. But none of these things now had power to excite his soul, for his glance followed the flying geese into unknown distances. And when he returned home in the evening to his wife, though his mood was slightly melancholy, yet he spoke to her in a quiet and friendly manner.

From that day on Yang-Tsu lived in peace and contentment with his wife Yu-Nu. It is true that, like
every other human being, her heart was also at timesfilled with a painful restlessness which seemed too
great for her little home to contain. Then she wouldopen the parasol, and her eyes would follow the wandering wild geese in their flight. And her restlessness would fly far away with them in longing, as the smoke flies out of the chimney and no longer poisons the air of the room. Soon Yu-Nu found no red veins in her eyes, for, like her husband, she had found in the parasol-maker’s last parasol a sky which brought peace and contentment.

Prev Story The Parasol of Contentment
Next Story