Fairytalez.com » Jean de Bosschère » The Peasant and the Satyrs

One cold winter’s day a peasant set out on a journey which led him through the depths of a forest into which he had not hitherto been. The result was that he lost his way, and after wandering about for many hours in the hope of finding it again, he found himself, just as dusk was coming on, in a little clearing where he was overjoyed to see a small house with a cheerful light in the window.

“Here is a chance of supper and a bed,” thought the peasant, and he made haste to go up to the cottage door. 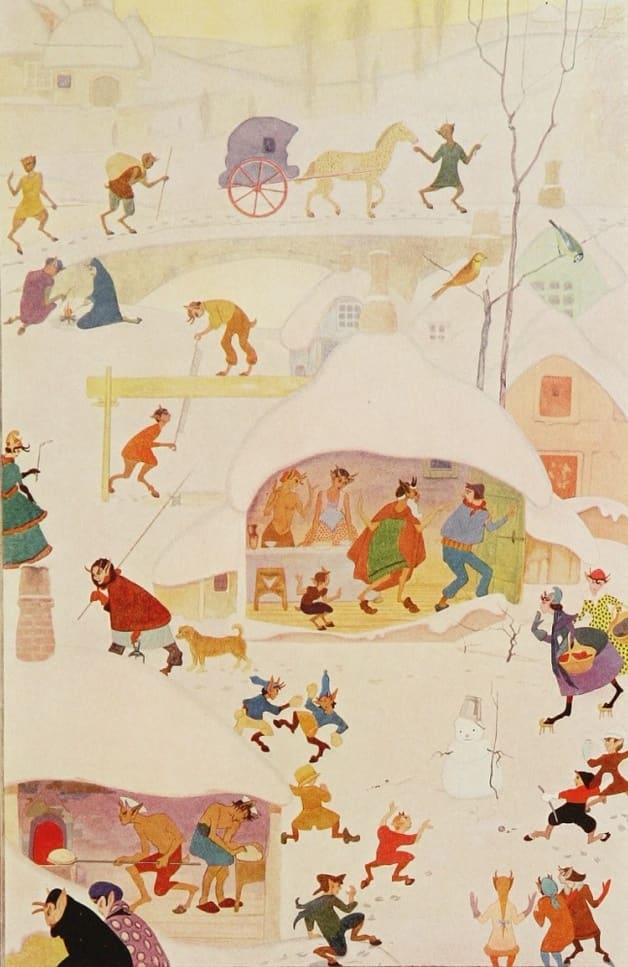 Now this house in the clearing was not inhabited by men, but by some strange forest folk who were called satyrs. If you want to know what they were like, you must look at the pictures. Certainly the peasant had never seen anything like them before, although he had often heard of them, and when he nearly tumbled over the little satyr children who were playing in the snow outside the house door, he was the most surprised man in all those parts. It was too late to draw back however, so he went boldly up to the door and gave a loud knock.

“Come in!” cried a gruff voice, and the peasant accordingly went in and found himself facing the father of all the satyrs, who had a long beard and a pair of horns jutting from his forehead. The poor fellow’s knees trembled underneath him for fright, especially when he saw all the other satyrs, the mother and the uncles and the aunts, glowering at him.

“Please forgive me for my intrusion,” said he, “but I have lost my way in the woods, and I am half dead with hunger and cold. It would be an act of great kindness if you would give me some food and allow me to take shelter for the night.” So saying, to give point to his remarks, he set to work to blow upon his chilled fingers, which indeed were blue with the cold.

“Why are you blowing your fingers?” asked the father of all the satyrs curiously.

“Why, to warm them,” answered the peasant, and he blew harder than before.

“Well, sit down,” said the satyr. “As it happens we are just about to have supper, and you are welcome to share it with us.”

So the peasant sat down to supper, and all the satyr family sat down too, and watched him with big unblinking eyes, so that he felt very uncomfortable. A big basin of soup was set before him, and finding it very hot, he began to blow upon it.

At this all the satyr family cried out in surprise, and the father satyr said, ” Why are you blowing your soup?”

“To cool it,” answered the peasant. “It is too hot, and I am afraid it may scald my mouth.”

Another and a louder cry of surprise came from all the satyrs, but the father cried out loudest of all, and seemed very indignant. “Come,” he said, advancing to the peasant and taking him by the collar. “Out you go! There is no place in my house for a man who can blow hot and cold with the same breath. That smells too much of sorcery or magic. Out you go, I say, and practise your spells in the forest.”

So the poor peasant had to go supperless and spend the night in the woods, with no shelter but the trees, and the snow for coverlet.

And, if you wish to know when all this happened, all I can tell you is that it was a very long time ago, in the days when fishes flew, and cats had wings.

Fairies or No Fairies

Fairies or No Fairies