Fairytalez.com » Lillian Gask » The Shepherd and the Dragon

On a lofty mountain in Serbia, surrounded by his flock, sat a humble shepherd. The valley beneath him was veiled by a thin white haze, through which he could just see the tips of the stately beeches, on which the frost had already laid his crimson touch. Only the contented munching of the sheep on the close-cropped grass, and the trilling sweetness of a lark’s song high up in the blue, broke the placid stillness of the scene.

The shepherd stretched himself, yawning, and gazed at the sea and sky. He had nothing to do just then, and little to think of, for his life flowed on in an even course, and though he often wished that something would happen, he had never been disturbed. He was gazing dreamily at the cottage beyond the sheep-pens, where his wife was busy preparing his dinner, when he saw a dark form gliding stealthily through the grass towards a big bare rock. It was followed by another, and yet another. They were finely-marked serpents with glistening scales, and each bore in its mouth a curious root, with which it touched the rock. More serpents still approached, and did the same, until suddenly the great rock fell asunder, showing a long passage in the ground, into which the serpents glided, one by one. In his eagerness to see what they were after, the shepherd forgot his shuddering dislike of the venomous creatures, and pressed boldly into the rocky gallery. 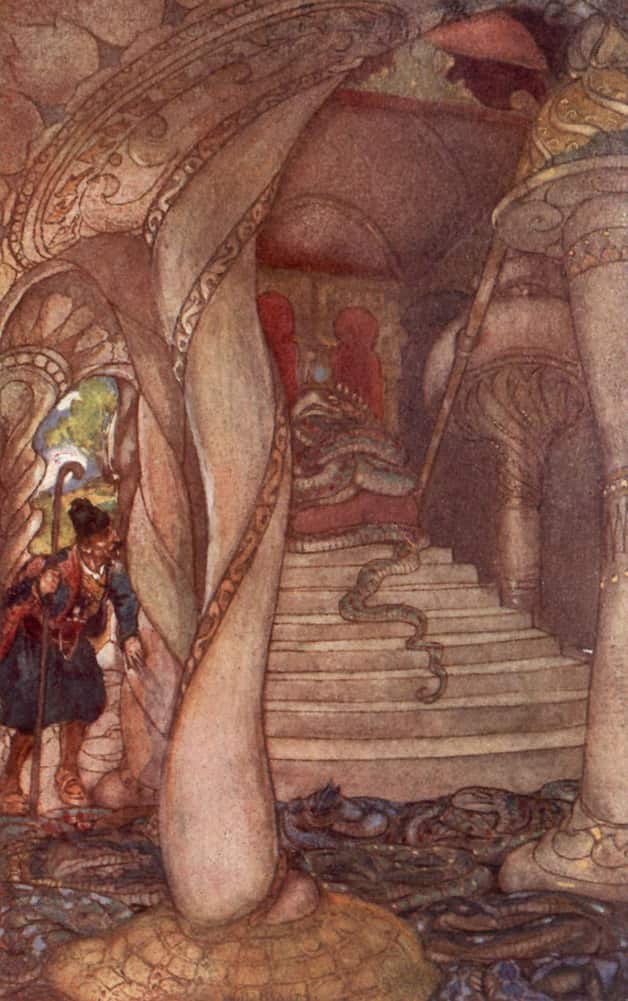 “Coiled upon the throne was an enormous serpent.” Illustration by Willy Pogany, published in Folk Tales from Many Lands by Lillian Gask (1910), Thomas Y. Crowell Company

Soon he found himself in a large grotto lit by the gleam of the many precious gems that lined its walls. In its centre stood a magnificent throne of gold, set with emeralds and sapphires, and coiled upon this was an enormous serpent with gleaming eyes. The other serpents gathered round in complete silence; as the shepherd gazed in open-mouthed wonder, the great reptile closed his eyes, and immediately all were asleep.

The shepherd seized the opportunity to wander round the grotto, examining the jewels with which it was so richly encrusted, and wishing that he could carry away some in his pocket. Finding it impossible to detach them, he thought he had better depart before the serpents awoke, and so he made his way back through the long passage; but the entrance was closed, and he could not get out. Oddly enough, he felt no alarm, and, returning once more to the grotto, laid himself down beside the serpents and fell into a deep slumber.

He was roused by the consciousness that the snakes were stirring. Opening his eyes, he saw that all were gazing with heads erect at their grim monarch.

“It is time,” he answered after a long pause, and gliding down from his throne, led them through the grotto back to the rock. It opened as he touched it, and every serpent passed slowly out before him. The shepherd would have followed, but the Snake King barred his way with an angry hiss.

“Let me through, I entreat you, O gracious King!” begged the shepherd. “I shall lose my flock if I leave it longer, and my wife will be waiting for me at home.”

“You entered our sleeping-place without an invitation, and now you must stay,” replied the King; but the shepherd pleaded so earnestly for his release that he was moved to clemency.

“I will let you go this time,” he said, “if you give me your solemn promise that you will reveal our hiding-place to no one.”

The shepherd was quite ready to do this, and three times in succession he repeated after the Serpent King the words of a solemn oath. This done, he was allowed to pass out of the rock.

The chestnut-trees in the fertile valleys were now a mass of star-white blossom, and the bleating of the lambs told him that spring had come. Greatly bewildered, he hurried towards his home, rather doubtful as to what reception his wife would give him. As he approached the cottage, he saw a stranger standing by the door, and stepped into the shadow of a bush that he might wait unseen until he had gone.

“Is your husband at home?” inquired the man, as the shepherd’s wife, looking pale and thin, answered his loud knock.

“Alas! no,” was her mournful reply. “I have not seen him since last autumn, when he left me to tend his flock on the mountain-side. I fear the wolves must have devoured him.” And covering her head with her apron, she burst into tears. Touched by her distress, the shepherd now came forward.

IAM here, dear wife,” he told her joyfully. The woman immediately stopped her weeping, and, instead of bidding him welcome, began to scold with a frowning face.

“Where have you been, you lazy fellow?” she demanded. “It was just like you to leave me to get through the winter as best I could. Answer me at once!”

The shepherd could not do this without breaking his oath, and there was something so strange in his manner as he tried to parry her questions that the curiosity of the stranger was aroused.

“Come, come, my good man,” he said, “tell your wife the truth, and I will reward you with a piece of gold. Where did you sleep through the winter nights, and what have you been doing?”

“I slept in the sheep-pen,” began the shepherd, and the stranger burst into a scornful laugh.

“You need not fancy we are foolish enough to believe that,” he said. “Out with it, man! We can see you are hiding something.”

Thus pressed, the shepherd reluctantly confessed the existence of the grotto, and the stranger, who happened to be a magician in disguise, forced him not only to guide him thither, but to reveal the manner of entrance. A root that a serpent had discarded lay at their feet, and on touching the rock with this, it opened immediately, and let them through.

The magician coveted the splendid jewels that lined the walls of the grotto as much as the shepherd had done, and conned through the book of spells that he drew from the folds of his garment to see if it would tell him how to gain possession of the rich store.

“I have it!” he exclaimed. “I shall now be rich as the heart of man can desire, and you, good shepherd, shall share my wealth.”

Replacing his book, he was about to set fire to a small pellet which he produced from his pocket, when he was interrupted by a terrible hiss. Unseen by the intruders, the King of the Serpents had followed in the form of a Green Dragon, and now reproached the shepherd with much violence for having broken his oath.

His rage was so great that the shepherd thought his end had come.

“Throw this over his head,” muttered the magician in his ear, handing him a rope.

Despite the trembling of his hand, the shepherd made a cast which was successful, and as the loop encircled the neck of the King, the rock burst asunder with a loud report that echoed from hill to hill. The next moment the shepherd found himself flying through space on the back of the Green Dragon. Such was the speed at which the wings of the fiery creature clove the air that the rushing of the wind in his rider’s face was painful to endure.

They went over mountains and over seas, over desert lands where sandstorms raged and vultures lay in wait for the fainting camels, until at last they came to a wide plain watered by many rivers. The Dragon flew higher and higher, until the shepherd grew dizzy and lost his breath. His eyes were closed, but in the blue sky above him he could hear the sweet clear notes of a soaring lark.

“Dear bird,” he cried, “thou art precious to thy Master, Who made us all. Fly up to Him, I pray thee, and beg Him to send me help in my sorry plight.”

The lark flew up to Heaven as he had bidden her, and returned with a green leaf from a tree in Paradise in her tiny beak. Gladly she dropped this on the Dragon’s head, and as it touched him he fell to the ground and became once more a crawling serpent.

When the shepherd regained consciousness, he was on the mountain-side, with his flocks around him, and his faithful dog at his feet. The forest was still in its autumn glory of yellow and gold, and in the distance he could see his wife beckoning to him from his cottage door.

“I must have been dreaming,” he said, as with thankful heart he went home to his dinner. He lived to a ripe old age in peace and quietness, and never again did he wish that something strange would happen.

The Sparrow and the Two Children

Prev Story The Shepherd and the Dragon
Next Story

The Sparrow and the Two Children