In the long ago there was an old woman who dwelt in a little hut, and whose whole wealth consisted of one cow. With her lived her grandson, and he was a quaint fellow, full of funny ideas. Now it came to pass that the old woman was in such great trouble because of her poverty that she told the boy to take the cow to market and sell it there. He set out with the cow, but, before he came to the market town, he met an old woman, who walked along beside him and asked him all sorts of questions. At last she said: “I like you, my boy, and I will offer you a piece of good advice: Let me have your cow! To be sure, I have no money, but I will give you something that is much better than money.”

Then she showed the boy what she was carrying in her apron—three tiny little pigs. They were very pretty, for their skins were bright red, and they had little curly tails. When she put them down and, drawing forth a flute, began to play, the pigs began to dance and wag their little tails, so that it was a pleasure to look at them. “Now, my boy,” she said, “I will give you these, together with the flute, in exchange for your old cow. That is surely a good bargain, and ought to please you.” The lad thought so too, and accepted her offer. He took off his coat and wrapped the little pigs in it, because it would have been a shame to make them walk the whole way home; but the flute he put inside his cap. He ran home as fast as he could, and with great glee, showed his grandmother what he had brought back in exchange for the cow.

But the poor old woman began to weep and lament, and even the dancing of the little pigs could not consoleher. She told the boy that he was mad and was ruining her, but he told her to cheer up, for it was a very good bargain that he had made.Quite close to the old woman’s cottage lived a rich nobleman with his wife, and they had an only child, a very pretty girl. She was of the same age as the boy, about fifteen years old, but she was an exceedingly proud young lady. As the boy knew that her parents were from home and that she was alone, he took his little pigs, went in front of her windows, played on his
flute and let the pigs dance. The young lady came to the castle wall and looked on, and as she liked the clever pigs, she came outside and offered to buy one of them. However, the lad would not give her one for money, but he said that if she would allow him to stroke her cheek, and if she would give him some food for his old grandmother, he would willingly let her have a little pig. 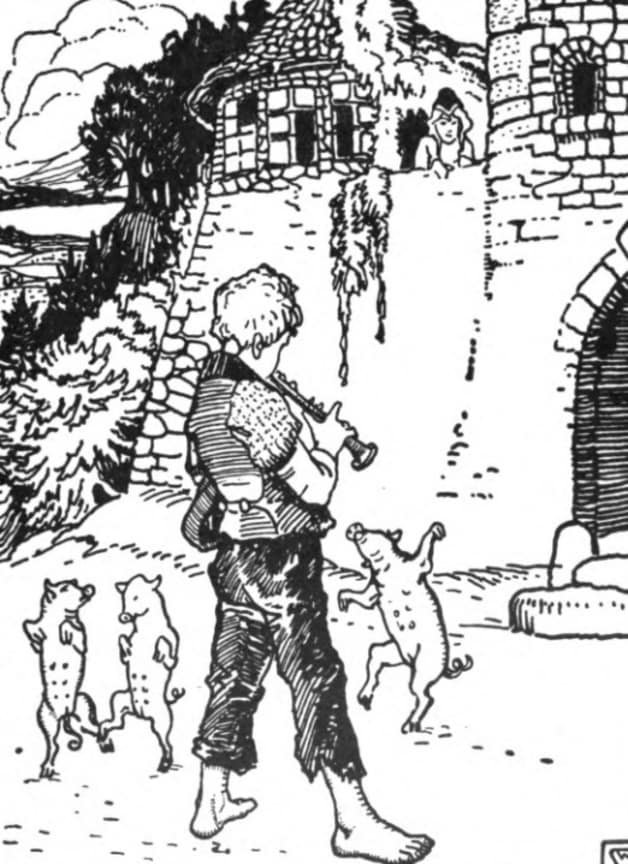 The boy’s clothes were very ragged and his hands not particularly clean, so the young lady did not care to
have her cheek stroked by him, but she was so eager to have one of the pigs, that she allowed him to do as he requested, and she also gave him a large basket of food. He came home very proudly and told his grandmotherwhat he had received for one pig, but she did not seem at all pleased.

That was all very well, she said, butwhat would they live on when the food was eaten? “Never mind that,” said the boy, ” I will take care of the future.” Next day he took the two remaining pigs, went again to the window of the mansion and played on his flute, and his pigs danced even more beautifully than the day before. The young lady came out to look at thedancing. She had not been able to make her pig dance at all, and she thought it would behave better if she could buy another as a companion for it. She asked the boy if he would sell her another, and he replied that he would willingly give her another, if she would allow him to kiss her.

Now, although he was a pretty enough boy if only he had been cleaner, he had just been eating some bread and treacle, and his mouth was very sticky, but the young lady was so eager to have the second pig, that she consented. Then he gave her a sounding kiss right on her ruddy lips, and was sent home with another basket of food. Proudly he told his grandmotherwhat he had got for his second pig, and when shegrumbled again, because they would have nothing to cat when this supply was gone, he told her, as before, not to trouble, for he would take care of the future. On the morning of the third day, he went again beforethe young lady’s window with his remaining pig; he played on his flute and the pig danced and leapt around him more merrily than ever. The little lady came out again and looked on; she was very sad because she not been able to make her two pigs dance. Now she wanted the third one and also the flute, because she could see quite well that it was the magic of the flute that made the pigs dance. She therefore asked the boy if he would sell her the third pig and the flute with it. “Oh, yes,” said the boy, ” I will gladly give them to you, if you will lay your head in my lap.”

The boy’s clothes were ragged and dirty, and the younglady did not want her beautiful black hair to be soiled, but if she was to have her wish gratified she must do what the boy asked, and she therefore laid her head in his lap. He stroked her black silken hair with his fingers, and in doing so he noticed three strange hairs among the others: one was golden, another was silver, and a third was pure white. Then he received his usual basket of food and walked home. He showed his grandmother what he had brought, but she answered him in the usual way, while he told her again that he would look after things in the future.

The nobleman and his wife came home soon after this,and as they thought it was time that their daughter should marry, the father conceived the strange idea that whosoever could name three hidden marks on his daughter, should have her for wife. Soon many young men arrived from every corner of the country, and guessed all sorts of things, but not one of them thought of the right thing. The ragged boy had heard about this strange offer and he also went to the mansion. He ran about outside the
windows, singing: “I know what I would say! I know what I would say!”

The young lady grew very frightened lest she might be compelled to marry a poor ragged boy, so she threw more money out of the window to him and said:”Do go away, you tiresome boy ! I cannot endure your singing any longer.” But he just put the money in his cap and began his old song once more.
He had tried repeatedly to slip into the mansion, but each time he had been driven back by the servants who would not admit such a ragged fellow. Presently he saw a young nobleman who was going to try his luck. The nobleman had noticed the boy and heard his little song, so he said to him: “What is it that you know?”

“I know the secret hidden marks on the squire’s daughter,” said the boy. “Tell me what they are, and I will reward you well,” said the young nobleman. “Yes, I will tell you what they are,” said the boy,”but you must take me with you into the house, so that I can see the fun. You can easily hide me under your cloak, and  hen I can slip in with you.” That was easily done, and although the young noble looked rather stout, nobody noticed anything amiss. The two came into the room, where a number of suitors were trying to guess the riddle, but none of them had discovered the right thing. Then the boy cried from the cloak: “The lady has one golden hair, one silver hair, and one white hair on her head.”

“That is correct!” cried the squire. The boy came forth from his hiding-place, declaring that they must give him the young lady as his wife, and at the same time he waved his cap so that all his money rolled on the floor. The squire was greatly taken aback; he could not break his word and yet he had not expected such a son-in-law. Then he said: “What is all that money on the floor?”

“That is the money your daughter gave me to be silent,” said the boy. “What do you mean by that?”
asked the squire. “Out with it! Tell me all that has happened.” The boy related his story from the very beginning, telling the squire about the cow and the three little pigs, he described how he had sold the first pig and what he had received for it, and then how he had sold the second one, and what he had got for that. When the squire heard that his daughter had given him a kiss in exchange for it he
would not hear any more, but turned to his daughter and said: “Well, if you have kissed him, you shall marry him!”

And so it happened; the two were made man and wife and loved each other very dearly all their
life long.