There were once two brothers, the only children of aged parents, but though the boys had grown up side by side, they bore one another but little love. The elder was sadly jealous of the younger, who was pleasant of countenance and fair-spoken, hating him because men looked upon him with favour.

One day the two youths went out hunting. Before they had killed any game they came upon a deserted village whence all the inhabitants had fled. Nowhere was there any sign of life, but in the centre of the village stood a long row of water-pots, which had been turned upside down.

“This is a strange thing,” said the younger. “Let us turn these pots over and see whether there is anything in them.”

“No,” replied the other, “there may be witch-craft in this. It is not wise to handle them.” So saying he drew back, and would have fled from the village; but the younger laughed at his fears and began to turn over the pots.

“There is nothing in this,” said he, lifting the first; “nor in this, nor in this,” he went on. But when he lifted the last of the row, out stepped a little old woman, overjoyed at being released from her captivity. Instead, however, of thanking the youth who had set her free, she turned to the elder, saying, “Come with me that I may reward you.”

Fearing the adventure, he hung back; then the old woman beckoned to the younger brother, who followed. Thereupon the elder, fearing that he should be mocked as a coward, took courage and went with them.

They journeyed for many days till the moon, which was young when they started, waned. By this time they had reached an open country, grown with good green grass, and here they halted. The  old woman pointed to a tree of wide girth which stood apart from any others and was of great age.

Take your axe,” said she to the younger brother, “and hew a hole in its trunk.”

It was a task for a giant, but the young man did her bidding, and at the third stroke there appeared a great hole in the tree, from which there came forth first a fine bullock and then a whole herd of sleek cattle. Next followed a sheep, a goat, and a great white ox.

When all had come forth the old woman bade the young men depart, taking with them the cattle as a reward for delivering her from her captivity.

Journeying homeward, the brothers had to pass through a dry country that had been scorched by the sun. For many moons no rain had fallen, and the hard earth wounded their feet as they trod its surface. The trees stretched out leafless, blackened arms, as if deriding them, and the thirst-stricken beasts moved painfully on their way.

But one day when their strength was well-nigh spent, the younger of the brothers heard the sound of rushing water, and with hope in his heart he hastened forward till he came to the edge of a precipice which dropped sheer down from the mountain-path they were treading. Stretching himself upon the earth, he leaned over the edge of the rock. At its base he saw a deep clear pool fed by a waterfall that poured down at the other side of the ravine, but so steep was the descent that no man could find a place for his foot. Lifting his head, he cast a despairing glance at his brother.

“I die of thirst,” said the elder, who had followed wearily. “Take this rope and bind it round me, that you may lower me to the pool. If I do not drink I shall surely die.”

The younger did his bidding, and when he had quenched his thirst drew him up again.

“It is now my turn, brother,” he said, binding the rope round his own body. “Let me down that I too may slake my thirst.”

The elder lowered him that he might drink, and then, because his heart was evil, let slip the rope, leaving his brother to perish.

When he reached home, his parents questioned him, saying, “Where is your brother, and whence come these fine cattle and sheep?”

“Has he not yet returned?” said the youth. “He should have been here by now, for he set out homeward before I did. As for these cattle and sheep, they were given to me by an old woman.”

Satisfied with his answer, the old people went to rest, but in the night the woman dreamed strange dreams—dreams of evil which had befallen her younger son. When the first streaks of light stole into her hut, she heard a bird calling, “Tshiyo, tshiyo! Your son has been left to perish by the water’s edge!”

She wakened her husband. “Hark!” she cried. “The bird tells of evil done to our son. Do you not hear it calling?”

But the man laughed at her fears, saying, “It is the honey bird calling us to where the honey is hidden, that he may share our feast when we rifle the hive.”

But the woman was not to be silenced, and at last her husband gave way. They followed the bird till they came to the mountain pass where the brothers had halted on their journey. It paused for a moment on the edge of the precipice, and then flew down into the ravine, still calling. 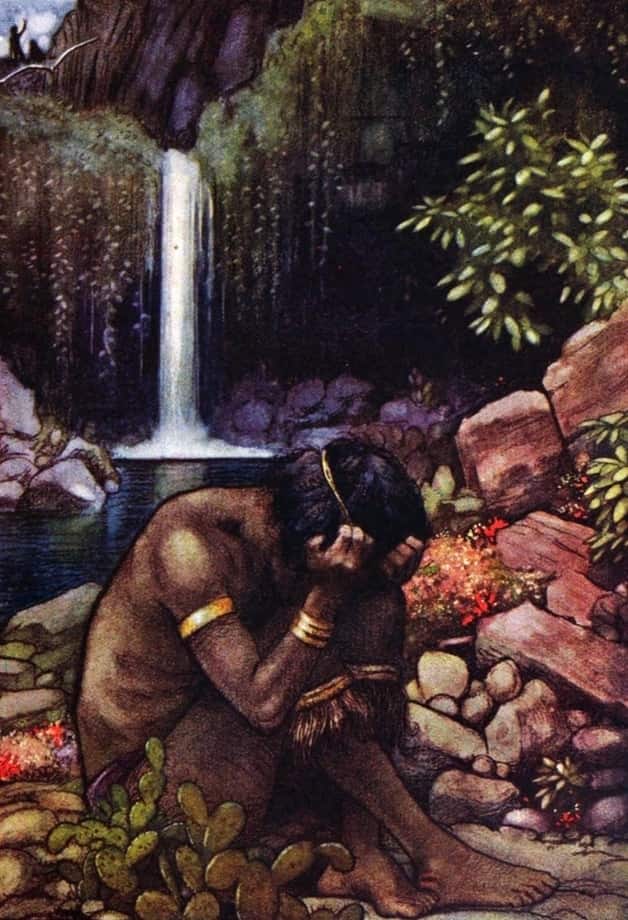 “SItting with his head buried in his hands.” Illustration by Helen Jacobs, published in Native Fairy Tales of South Africa by Ethel McPherson (1919), George G. Harap and Co.

The man called aloud, saying, “How come you to be at the bottom of this ravine?”

Looking up and beholding his father the young man told him all that had befallen him and his brother; how they had come upon the deserted village, and had released the old woman, and how she had rewarded him with cattle and sheep.

When he had heard his story, the man hastened back to his hut to fetch a rope, while the mother waited at the top of the precipice and threw down to the boy the food that they had brought with them. Having eaten, his strength was renewed.

Before sunset the man returned, bringing with him a rope, which he threw down to his son. The young man bound it round him, and his father drew him up again. At the sight of her boy the woman wept for gladness, but the father’s heart was filled with anger at the cruelty of his first-born. He vowed to punish him with death; but when they reached home they found that the evil-hearted youth had gone, nor did he ever return.

Prev Story The Daughter of the Sword
Next Story