There was once upon a time a woman who had one son. This son maintained himself and his mother; he fed their one cow, and brought wood and carried it to the town for sale, and with the money bought bread to support his mother and himself. On one occasion he carried sticks to market, and bought bread and went homewards. As he went homewards with the bread, he went through a wood, came up to some shepherds, and saw that they were going to kill a puppy, and said to them: ‘Don’t kill it; the poor animal has done you no wrong; give it rather to me.’ The shepherds said to him: ‘What will you give us? Give us that loaf.’ He gave them the loaf, took the dog, and carried it home. When he got home, his mother asked him: ‘Have you brought any bread?’ ‘No, but I have bought a puppy with the bread.’ She then said: ‘Wherewith shall we support it, when we’ve nothing to eat ourselves?’ ‘Well, I’ll go gather sticks, sell them, and buy bread.’ He went a second time to gather sticks, took them and sold them, then bought bread, went through the wood, and saw where the shepherds were killing a kitten, and said to them: ‘Don’t kill the animal; it has done you no harm; rather give it to me?’ They said to him: ‘What will you give us?’ He said: ‘What should I give you, when I’ve got nothing?’

The shepherds said: ‘That loaf of bread.’ He gave it them and carried the kitten home. The old woman was again anxiously expecting bread. When he got home his mother said to him: ‘Do you bring me any bread?’ ‘No, but I’ve bought a kitten with the bread.’ The old woman then said: ‘You’ve nothing to eat yourself, much less the cat.’ He then said: ‘It, too, will be serviceable. I’ll go gather sticks, sell them, and buy bread.’ He went a third time, gathered and sold sticks, bought bread, and went homewards. Going through the wood, he saw the shepherds killing a snake, and said: ‘Don’t kill the snake, it has done you no harm;

He begged for it, too, because he compassionated it; it was beautifully marked, and he fancied it. Then said the shepherds: ‘What will you give us not to kill it?’ He said: ‘This little loaf of bread.’ He gave it them, and they gave him the snake. He went home with the snake, and the snake said to him: ‘Now feed me; when I grow up you shall carry me home.’ When he got home his mother said to him: ‘Why haven’t you brought some bread? Why have you brought this?’ He said: ‘It, too, will be of service.’ Then he went a fourth time to gather sticks, took them to market, sold them, bought four loaves of bread, and brought them home. Then they all ate their fill—the dog, the cat, the snake, his mother, and himself. He maintained the whole set of animals. 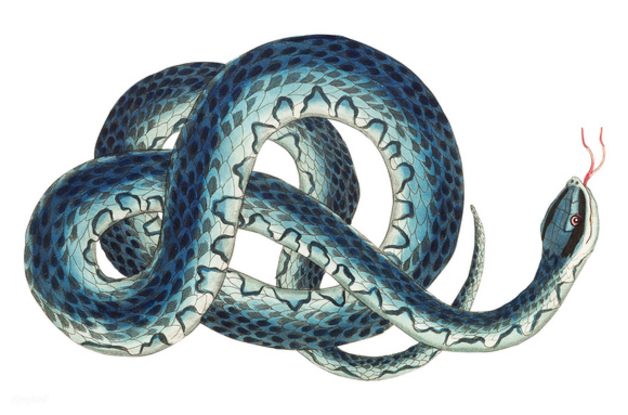 The snake grew big; he now carried it home. It said to him: ‘Do you hear? my mother will offer you gold and silver, but don’t take any, but let her give you the lock which hangs behind the door. Whenever you want anything whatever, only knock on the lock; twelve young men will come, who will ask you: “What are your commands?” Only say what you wish for, and you will have it immediately.’ When he carried it home, its parents asked him what he wanted for bringing their daughter home. He said according to his instructions: ‘Nothing but that lock, which hangs behind the door.’ They said to him: ‘We can’t give you that; and what good would you do yourself with the lock? Let us rather give you a quantity of money, as much as you can carry.’ He then said: ‘I don’t wish for your money; only give me the lock.’ When they long refused to give it him, he was about to depart. But they saw that he ought not to go away without payment, so gave him the lock. Now, when he had obtained the lock, and had gone a little distance from the house, he knocked on the lock, and immediately out came twelve young men, who asked him: ‘What are your commands?’

‘Only that you place me at home at once.’ He immediately stood in front of his cottage, and when his mother saw him, she rejoiced: ‘Oh, my son! you have come home; how miserable I have been because you were not at home!’ ‘Well, mamma, don’t talk! we shall now live better than we have done hitherto; I have brought you such a thing, that we shall live with ease.’ Then he gently knocked on the lock, and up darted the twelve young men: ‘What are your commands?’ ‘Food and drink for me, my mother, the dog and the cat.’ And so it was. This pleased the old woman, and she loved her son still more.

This, too, came to pass. On the morrow he caused his six best horses to be harnessed, and went to fetch the king’s daughter, to go to the wedding. Then the king said that there should be wedding festivities for five years. They were married, and the wedding festivities took place. Entrance was free to everyone. The festivities had already lasted three years, when the king’s resources were exhausted. Then said the young man: ‘Now I will entertain for three years.’ The king of the sea came, too, to the festivities, and fancied the king’s daughter, whom the other had married. Once upon a time he saw how he knocked upon the lock, and that which he wanted immediately presented itself. When they went to sleep, the king of the sea stole the lock, and knocked upon it; up sprang the twelve young men: ‘What are your commands?’ ‘That this castle and this lady be placed on the black sea.’

It was done. In the morning the young man and his mother were terrified out of their wits, because they were lying in a simple cottage. But he knew at once that he had lost the lock. Then he went to the king and prayed him to take charge of his mother, that he might go to look for his castle. Well, he went to look for it, with his dog and cat. He approached that sea, saw his castle, and said: ‘Cat and dog, do you see our castle? But how shall we get into it?’ They went to the sea and sat down. He was weary, and fell asleep as he sat. Then said the dog and the cat: ‘Let us go for the lock.’ The dog said: ‘You can’t swim; sit on my back; I will carry you.’ They went and came up to the wall. Then said the dog: ‘I can’t climb up a wall.’ The cat said to him: ‘You hang on somehow behind me.’ And thus they arrived at the corridor. Now said the cat: ‘You, dog, stay outside; I’ll go in by myself.’ The king of the sea had just such a cat. The cat went to the door and mewed: ‘Miau.’ Then said the king of the sea: ‘Let the cat in.’ Then the cat went in and took the lock so neatly that the king of the sea didn’t see it; he then went to the door and mewed: ‘Miau.’ Then said the king of the sea: ‘Let the cat out.’ The cat went out, and the dog asked it: ‘Have you got it?’ ‘I have; only go.’ They went over the wall and into the sea; and when they were already not far from their master, the dog wanted to have hold of the lock, to carry it up to his master, and said to the cat: ‘Give me the lock; if you don’t, I will throw you into the sea.’ Then they squabbled, and the lock fell into the sea, and a fish swallowed it; but the cat seized the fish, and said: ‘If you don’t give up the lock I will kill you.’ The fish said: ‘Don’t kill me; I’ll give you the lock,’ and immediately brought the lock up. They went to their master, and carried up the lock.

When their master awoke and rose up, he said: ‘In what condition have you come?’ They said: ‘Our master, we have brought the lock.’ ‘Where is it?’ ‘Here.’ Then he took it and knocked upon it, and out sprang the twelve young men: ‘What are your commands?’ ‘I command that my castle be placed where it was, as well as that king and my wife.’ It was done. Then he went into the castle, and she immediately ran to him and they kissed each other. But he caused the king of the sea to be impaled on a spit in the midst of the sea. Thus he obtained his castle back again, and lived happily with his wife, but the king of the sea was destroyed.

The Daughter of the King of the Vilas

Prev Story The She-Wolf
Next Story

The Daughter of the King of the Vilas

Prev Story The She-Wolf
Explore our fairy tale collections on