Once upon a time there lived in Lapland a man who was so very strong and swift of foot that nobody in his native town of Vadso could come near him if they were running races in the summer evenings. The people of Vadso were very proud of their champion, and thought that there was no one like him in the world, till, by-and-by, it came to their ears that there dwelt among the mountains a Lapp, Andras Baive by name, who was said by his friends to be even stronger and swifter than the bailiff. Of course not a creature in Vadso believed that, and declared that if it made the mountaineers happier to talk such nonsense, why, let them!

The winter was long and cold, and the thoughts of the villagers were much busier with wolves than with Andras Baive, when suddenly, on a frosty day, he made his appearance in the little town of Vadso. The bailiff was delighted at this chance of trying his strength, and at once went out to seek Andras and to coax him into giving proof of his vigour. As he walked along his eyes fell upon a big eight-oared boat that lay upon the shore, and his face shone with pleasure. ‘That is the very thing,’ laughed he, ‘I will make him jump over that boat.’ Andras was quite ready to accept the challenge, and they soon settled the terms of the wager. He who could jump over the boat without so much as touching it with his heel was to be the winner, and would get a large sum of money as the prize. So, followed by many of the villagers, the two men walked down to the sea.

An old fisherman was chosen to stand near the boat to watch fair play, and to hold the stakes, and Andras, as the stranger was told to jump first. Going back to the flag which had been stuck into the sand to mark the starting place, he ran forward, with his head well thrown back, and cleared the boat with a mighty bound. The lookers- on cheered him, and indeed he well deserve it; but they waited anxiously all the same to see what the bailiff would do. On he came, taller than Andras by several inches, but heavier of build. He too sprang high and well, but as he came down his heel just grazed the edge of the boat. Dead silence reigned amidst the townsfolk, but Andras only laughed and said carelessly:

‘Just a little too short, bailiff; next time you must do better than that.’

The bailiff turned red with anger at his rival’s scornful words, and answered quickly: ‘Next time you will have something harder to do.’ And turning his back on his friends, he went sulkily home. Andras, putting the money he had earned in his pocket, went home also.

The following spring Andras happened to be driving his reindeer along a great fiord to the west of Vadso. A boy who had met him hastened to tell the bailiff that his enemy was only a few miles off; and the bailiff, disguising himself as a Stalo, or ogre, called his son and his dog and rowed away across the fiord to the place where the boy had met Andras.

Now the mountaineer was lazily walking along the sands, thinking of the new hut that he was building with the money that he had won on the day of his lucky jump. He wandered on, his eyes fixed on the sands, so that he did not see the bailiff drive his boat behind a rock, while he changed himself into a heap of wreckage which floated in on the waves. A stumble over a stone recalled Andras to himself, and looking up he beheld the mass of wreckage. ‘Dear me! I may find some use for that,’ he said; and hastened down to the sea, waiting till he could lay hold of some stray rope which might float towards him. Suddenly–he could not have told why–a nameless fear seized upon him, and he fled away from the shore as if for his life. As he ran he heard the sound of a pipe, such as only ogres of the Stalo kind were wont to use; and there flashed into his mind what the bailiff had said when they jumped the boat: ‘Next time you will have something harder to do.’ So it was no wreckage after all that he had seen, but the bailiff himself.

It happened that in the long summer nights up in the mountain, where the sun never set, and it was very difficult to get to sleep, Andras had spent many hours in the study of magic, and this stood him in good stead now. The instant he heard the Stalo music he wished himself to become the feet of a reindeer, and in this guise he galloped like the wind for several miles. Then he stopped to take breath and find out what his enemy was doing. Nothing he could see, but to his ears the notes of a pipe floated over the plain, and ever, as he listened, it drew nearer.

A cold shiver shook Andras, and this time he wished himself the feet of a reindeer calf. For when a reindeer calf has reached the age at which he begins first to lose his hair he is so swift that neither beast nor bird can come near him. A reindeer calf is the swiftest of all things living. Yes; but not so swift as a Stalo, as Andras found out when he stopped to rest, and heard the pipe playing!

For a moment his heart sank, and he gave himself up for dead, till he remembered that, not far off, were two little lakes joined together by a short though very broad river. In the middle of the river lay a stone that was always covered by water, except in dry seasons, and as the winter rains had been very heavy, he felt quite sure that not even the top of it could be seen. The next minute, if anyone had been looking that way, he would have beheld a small reindeer calf speeding northwards, and by-and-by giving a great spring, which landed him in the midst of the stream. But, instead of sinking to the bottom, he paused a second to steady himself, then gave a second spring which landed him on the further shore. He next ran on to a little hill where he saw down and began to neigh loudly, so that the Stalo might know exactly where he was.

‘Ah! There you are,’ cried the Stalo, appearing on the opposite bank; ‘for a moment I really thought I had lost you.’

‘No such luck,’ answered Andras, shaking his head sorrowfully. By this time he had taken his own shape again.

‘Well, but I don’t see how I am to get to you’ said the Stalo, looking up and down.

‘But I could not jump this river; and I don’t know how you did,’ replied the Stalo.

‘I should be ashamed to say such things,’ exclaimed Andras. ‘Do you mean to tell me that a jump, which the weakest Lapp boy would make nothing of, is beyond your strength?’ 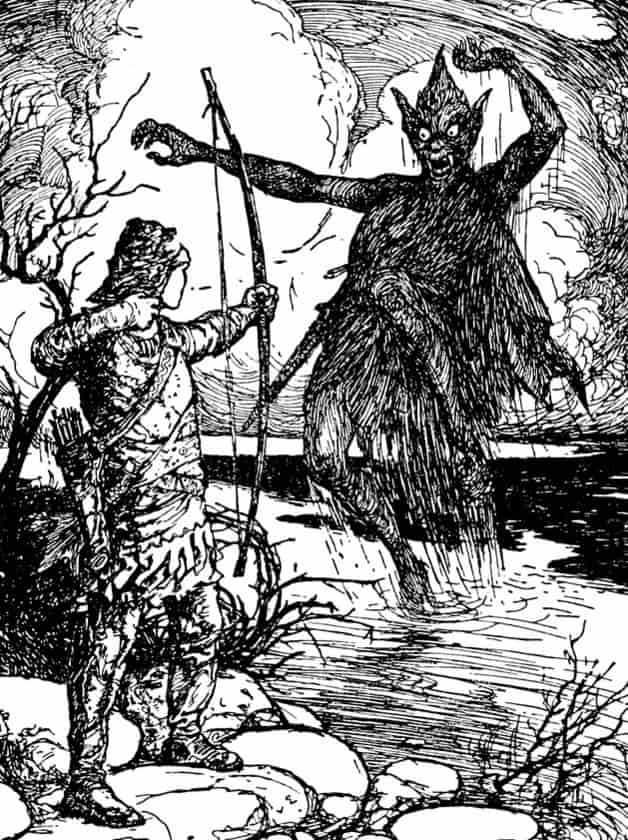 The Stalo grew red and angry when he heard these words, just as Andras meant him to do. He bounded into the air and fell straight into the river. Not that that would have mattered, for he was a good swimmer; but Andras drew out the bow and arrows which every Lapp carries, and took aim at him. His aim was good, but the Stalo sprang so high into the air that the arrow flew between his feet. A second shot, directed at his forehead, fared no better, for this time the Stalo jumped so high to the other side that the arrow passed between his finger and thumb. Then Andras aimed his third arrow a little over the Stalo’s head, and when he sprang up, just an instant too soon, it hit him between the ribs.

Mortally wounded as he was, the Stalo was not yet dead, and managed to swim to the shore. Stretching himself on the sand, he said slowly to Andras:

‘Promise that you will give me an honourable burial, and when my body is laid in the grave go in my boat across the fiord, and take whatever you find in my house which belongs to me. My dog you must kill, but spare my son, Andras.’

Then he died; and Andras sailed in his boat away across the fiord and found the dog and boy. The dog, a fierce, wicked-looking creature, he slew with one blow from his fist, for it is well known that if a Stalo’s dog licks the blood that flows from his dead master’s wounds the Stalo comes to life again. That is why no REAL Stalo is ever seen without his dog; but the bailiff, being only half a Stalo, had forgotten him, when he went to the little lakes in search of Andras. Next, Andras put all the gold and jewels which he found in the boat into his pockets, and bidding the boy get in, pushed it off from the shore, leaving the little craft to drift as it would, while he himself ran home. With the treasure he possessed he was able to buy a great herd of reindeer; and he soon married a rich wife, whose parents would not have him as a son-in-law when he was poor, and the two lived happy for ever after.

How the Stalos Were Tricked

How the Stalos Were Tricked