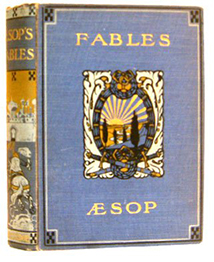 Historians doubt whether a Greek storyteller named Aesop ever lived, however, there’s a number of fables attributed to him. Scholars believe that he was a figure invented by ancient storytellers for the purpose of telling fables, and if real, he’s presumed to be born around 600 B.C. Aesop Fables use animals to tell simple morals, such as the value of hard work or the danger in believing flattery. Although children today read these in simple storybook collections, the fables of Aesop concern the moralistic nature of man and pack some powerful lessons in a few sentences. 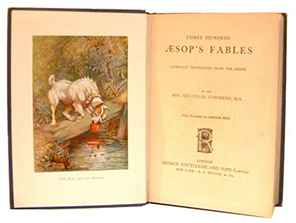 The biography of Aesop comes from mentions by other historical figures, and with these mentions, scholars are able to piece together a portrait of the fabulist. According to Aristotle, Aesop was a slave from Samos, and he died in Delphi. Further complicating the history of Aesop and his Fables is that no writing from his hand has been found, and he’s only referenced by other authors, who speak of reading him. The Aesop Romance, a fictional biography of the storyteller, tells the story of Aesop as a slave in Samos who gains freedom from his master, then becoming a riddle solver for a king, before finally being forced to jump to his death after telling insulting fables in Delphi. It’s believed that Aesop was invented by a number of writers so his name could be synonymous with fable.