Long, long ago, in the region beyond the Everlasting White Mountains of Northern Korea, there lived a king who was waited on by a handsome young woman servant. Every day she gladdened her eyes by looking southward, where the lofty mountain peak, which holds the Dragon’s Pool in its bosom, lifts its white head to the sky. When tired out with daily toil, she thought of the river that flows from the Dragon’s Pool, down out of the mountain. She hoped that some time she would have a son that would rule over the country which the river watered so richly.

One day, while watching the mountain top, she saw coming from the east a tiny bit of shining vapor. Floating like a white cloud in the blue sky, it seemed no bigger than an egg. It came nearer and nearer, until it seemed to go into the bosom of her dress. Very soon she became the mother of a boy. It was indeed a most beautiful child.

But the jealous king was angry. He did not like the little stranger. So he took the baby and threw it down among the pigs in the pen, thinking that this would be the last of the boy. But no! the sows breathed into the baby’s nostrils and their warm breath made it live. When the king’s servants heard the little fellow crowing, they went out to see what made the noise, and there they beheld a happy baby not seeming to mind its odd cradle at all. They wanted to give him food at once but the angry king again ordered the child to be thrown away, and this time into the stable. So the servants took the boy by the legs and laid him among the horses, expecting that the animals would tread on him and he would be thus put out of the way.

But no, the mares were gentle, and, with their warm breath, they not only kept the little fellow from getting cold, but they nourished him with their milk so that he grew fat and hearty. When the king heard of this wonderful behavior of pigs and horses, be bowed his head toward Heaven. It seemed the will of the Great One in the Sky that the boy baby should live and grow up to be a man. So he listened to its mother’s prayers and allowed her to bring her child into the palace. There he grew up and was trained like one of the king’s sons. As a sturdy youth, he practiced shooting with bow and arrows and became skilful in riding horses. He was always kind to animals. In the king’s dominions any man who was cruel to a horse was punished. Whoever struck a mare, so that the animal died, was himself put to death. The young man was always merciful to his beasts.

So the king named the youthful archer and horseman East Light, or Radiance of the Morning and made him Master of the Royal Stables. East Light, as the people liked to say his name, became very popular. They also called him Child of the Sun and Grandson of the Yellow River. One day while out on the mountains hunting deer, bears, and tigers, the king called upon the young archer to show his prowess in shooting arrows. East Light drew his bow and showed skill such as no one else could equal. He sent shaft after shaft whistling into the target and brought down both running deer and flying birds. Then all applauded the handsome youth.

But instead of the king’s commending Kast Light, the king became very jealous of him, fearing that he might want to be on the throne. Nothing that the young man could do seemed now to please his royal master. So, fearing he might lose his life if he remained near the king, Eaat Light with three trusty followers fled southward until he came to a great, deep river, wide and impassable. How to get across he knew not, for no boat was at hand and the time was too short to make a raft, for behind him were his enemies swiftly pursuing him. In a great strait, he cried out: “Alas, shall I, the child of the Sun and the Grandson of the Yellow River, be stopped here powerless by this stream?”

Then, as if his father, the Sun, had whispered to him what to do, he drew his bow and shot many arrows here and there into the water, nearly emptying his quiver. For a few moments nothing happened. To his companions it seemed a waste of good weapons. What would their leader have to fight his pursuers when they appeared, if his quiver were empty?

But in a moment more, the waters appeared to be strangely agitated. Soon they were flecked and foaming. From up and down the stream, and in front of them, the fish were swimming toward East Light, poking their noses out of the water as if they would say: “Get on our backs and we’ll save you.” They crowded together in so dense a mass that on their spines a bridge was soon formed, on which men could stand. 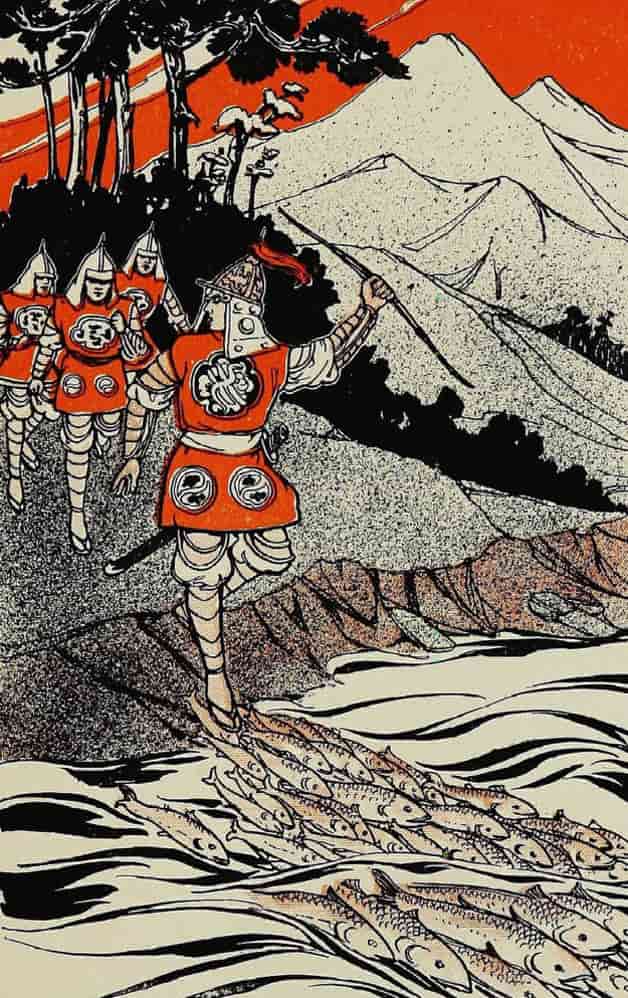 “Quick!” shouted East Light to his companions, ” let us fly. Behold the king’s horsemen coming down the hill after us. “So over the bridge of fish backs, scaly and full of spiny, fins, the four young men fled over the waters. As soon as they gained the opposite shore, the bridge of fishes dissolved. Yet scarcely had they swum away, when those who were in pursuit had gained the water’s edge, on the furthest side. In vain the king’s soldiers shot their war arrows to kill East Light and his three companions. The shafts fell short and the river was too deep and wide to swim their horses over. So the four young men escaped safely.

Marching on further a few miles, East Light met three strange persons, who seemed to be awaiting his coming. They welcomed him warmly and invited him to be their king and rule over their city. The first was dressed in seaweed, the second in hempen garments and the third in embroidered robes. These men represented the three classes of society; first fishermen and hunters; second farmers and artisans; and lastly rulers of the tribes.

So in this land named Fuyu, rich in the five grains, wheat, rice and millet, bean and sugar-cane, the new king was joyfully welcomed by his new subjects. The men were tall, brave and courteous. Besides being good archers, they rode horses skilfully. They ate out of bowls with chop-sticks and used round dishes at their feasts. They wore ornaments of large pearls and jewels of red jade cut and polished.

The Fuyu people gave the fairest virgin in their realm to be the bride of King East Light and she became a gracious queen, greatly beloved of her subjects and many children were born to them. East Light ruled long and happily. Under his reign the people of Fuyu became civilized and highly proaperous. He taught the proper relations of ruler and ruled and the laws of marriage, besides better methods of cooking and house-building. He also showed them how to dress their hair. He introduced the wearing of the topknot. For thousands of years topknots had been the fashion in Fuyu and in Korea.

Hundreds of years after East Light died, and all the tribes and states in the peninsula south of the Everlasting White Mountains wanted to become one nation and one kingdom ; they called their country after East Light, but in a more poetical form, — Chosen, which means Morning Radiance or the Land of the Morning Calm.

Prev Story Prince Sandalwood, the Father of Korea
Next Story