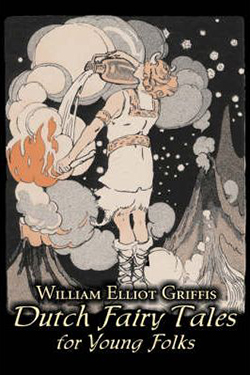 Born in Philadelphia in 1843, author William Elliot Griffis was an extremely prolific author and published several books of fairy tales in the 1900’s. An active minister in the United States in the 1800’s, he worked in several churches in Boston and New York, before retiring from ministry in 1903 to write and lecture. His extensive bibliography includes works about Japanese culture and heritage, and he helped author Inazo Nitobe write the renowned Bushido: The Soul of Japan.

As author and professor, his many trips to Europe, and especially the Netherlands, helped shape his appreciation of European cultures. Over the years, he would go on to publish collections of folklore from across the world, with titles such as Japanese Fairy World: Thirty-five Stories from the Wonderlore of Japan, The Firefly’s Lovers and Other Fairy Tales of Old Japan, Belgian Fairy Tales, Swiss Fairy Tales, Welsh Fairy Tales, Korean Fairy Tales and Japanese Fairy Tales. Although he isn’t as well known as Hans Christian Anderson, Griffis indeed contributed much to the world of folklore. He also received two Japanese orders (Order of the Rising Sun, Gold Rays with Neck Ribbon) and (Order of the Rising Sun, Gold Rays with Rosette), plus helped establish the National Institute of Arts and Letters, the American Historical Association, and the U.S. Naval Academy, according to his obituary from the New York Times. He died in Florida in 1928.