One day while Wing Tip the Spick was visiting her four uncles in the Village of Liver-and- Onions, a blizzard came up. Snow filled the sky and the wind blew and made a noise like heavy wagon axles grinding and crying. And on this day a gray rat came to the house of the four uncles, a rat with gray skin and gray hair, gray as the gray gravy on a beefsteak. The rat had a basket. In the basket was a catfish. And the rat said, “Please let me have a little fire and a little salt as I wish to make a bowl of hot catfish soup to keep me warm through the blizzard.”

And the four uncles all said together, “This is no time for rats to be around and we would like to ask you where you got the catfish in the basket.”

“Oh, oh, oh, please in the name of the five rusty rats, the five lucky rats of the Village of Cream Puffs, please don’t was the exclamation of Wing Tip the Spick.”

The uncles stopped. They looked long and deep into the eyes of Wing Tip the Spick and thought, as they had thought before, how her eyes were clear light blue the same as corn- flowers with blue raindrops shining on the silver leaves in a summer sun shower. And the four uncles opened the door and let the gray rat come in with the basket and the catfish. They showed the gray rat the way to the kitchen and the fire and the salt. And they watched the rat and kept him company while he fixed himself a catfish soup to keep him warm traveling through the blizzard with the sky full of snow. After they opened the front door and let the rat out and said good-by, they turned to Wing Tip the Spick and asked her to tell them about the five rusty lucky rats of the Village of Cream Puffs where she lived with her father and her mother and her folks.

“When I was a little girl growing up, before I learned all I learned since I got older, my grandfather gave me a birthday present because I was nine years, old. I remember how he said to me, ‘You will never be nine years old again after this birthday, so I give you this box for a birthday present.’ “In the box was a pair of red slippers with a gold clock on each slipper. One of the clocks ran fast. The other clock ran slow. And he told me if I wished to be early anywhere I should go by the clock that ran fast. And if I wished to be late anywhere I should go by the clock that ran slow. And that same birthday he took me down through the middle of the Village of Cream Puffs to the public square near the Roundhouse of the Big Spool. There he pointed his finger at the statue of the five rusty rats, the five lucky rats. And as near as I can remember his words, he said: ” ‘Many years ago, long before the snow birds began to wear funny little slip-on hats and funny little slip-on shoes, and away back long before the snow birds learned how to slip off their slip-on hats and how to slip off their slip- on shoes, long ago in the faraway Village of Liver-and-Onions, the people who ate cream puffs came together and met in the streets and picked up their baggage and put their belongings on their shoulders and marched out of the Village of Liver-and-Onions saying, “We shall find a new place for a village and the name of it shall be the Village of Cream Puffs. ”

‘They marched out on the prairie with their baggage and belongings in sacks on their shoulders. They held on to the long curved tails of the rusty rats Helped Find a New Village shoulders. And a blizzard came up. Snow filled the sky. The wind blew and blew and made a noise like heavy wagon axles grinding and crying. The snow came on. The wind twisted all day and all night and all the next day. The wind changed black and twisted and spit icicles in their faces. They got lost in the blizzard. They expected to die and be buried in the snow for the wolves to come and eat them. ” 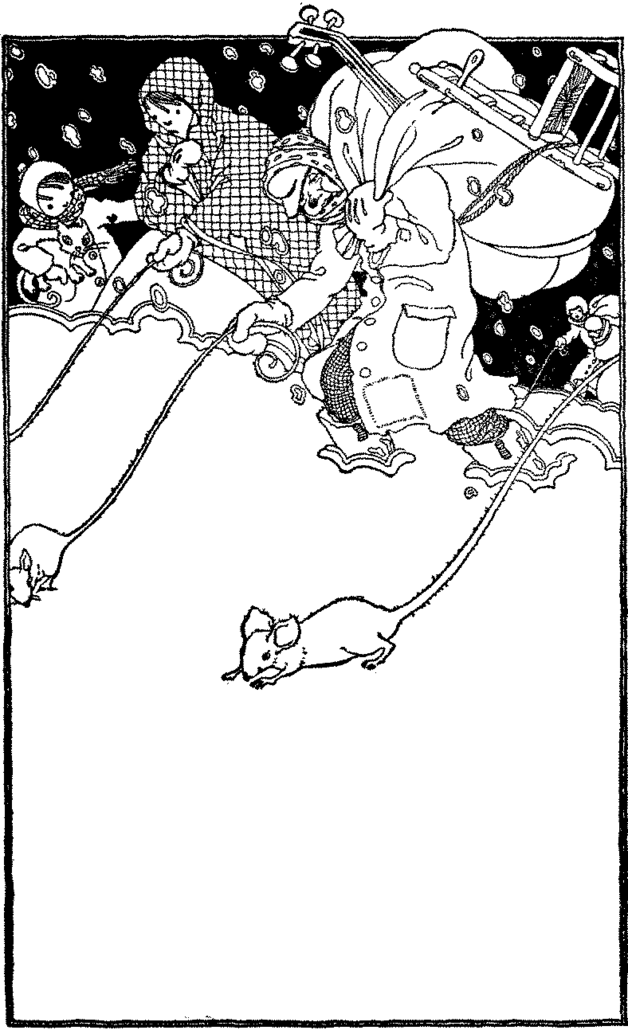 “They held on to the long curved tails of the rusty rats.” Illustration by Maud and Miska Petersham, published in Rootabaga Stories by Carl Sandburg (1922), Harcourt, Brace, and Company.

“And so, while the wind and the snow blew and the blizzard beat its icicles in their faces, they held on to the long curved tails of the rusty rats till they came to the place where the Village of Cream Puffs now stands. It was the rusty rats who saved their lives and showed them where to put their new village. That is why this statue now stands in the public square, this statue of the shapes of the five rusty rats, the five lucky rats with their noses down in the snow and their long curved tails lifted high out of the snow.’

“And sometime,” added Wing Tip the Spick, “when you go away from the Village of Liver- and-Onions and cross the Shampoo River and ride many miles across the upland prairie till you come to the Village of Cream Puffs, you will find a girl there who loves four uncles very much. And if you ask her politely, she will show you the red slippers with gold clocks on them, one clock to be early by, the other to be late by. And if you are still more polite she will take you through the middle of the town to the public square and show you the statue of the five rusty lucky rats with their long curved tails sticking up in the air like handles. And the tails are curved so long and so nice you will feel like going up and taking hold of them to see what will happen to you.”