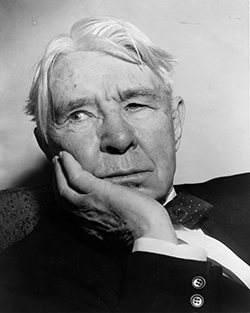 Carl Sandburg was a prolific poet and the recipient of three Pulitzer Prizes. He was born in Galesburg, Illinois January 8, 1878 to Swedish immigrants. The family’s name was originally Johnson, however, his father, August, changed their surname after meeting several men with the same name while working on the railroads. Sandburg supported his family from a young age, working as a bricklayer, dishwasher, among other odd jobs. He was inspired to attend Lombard College, located in his native Galesburg, when he met a student during the Spanish-American war. The young soldier took the student’s advice, and attended the university. Although his poetry attracted attention and resulted in his first publication credit, he didn’t receive a diploma. He relocated to Milwaukee, working as a reporter and ad writer, then when he and his new wife moved to Chicago, he worked as a journalist for the Chicago Daily News. Indeed, Chicago could be considered his muse, as it was the focus of a great deal of his poetry. He soon branched beyond poetry to include biographies, novels, children’s books and more in his writing repertoire. Published in 1922, Rootabaga Stories was his collection of children’s folk tales, stories written for his own children. The silly and whimsical stories are interrelated, sharing characters and locations. Scholars report that Rootabaga Stories was written out a desire to create American fairy tales and folk tales, and thus are set in a fictionalized Midwest setting. The main narrator of the stories is Potato Face Blind Man, who lives in Village of Liver-and-Onions. As Sandburg was a hobo at age 17, traveling the railroad, some of those themes appear in the stories for children. A sequel, Rootabaga Pigeons, was released in 1923. The author died July 22, 1967, and his ashes were buried under Remembrance Rock in Galesburg.