Fairytalez.com » Padraic Colum » Hina, the Woman in the Moon

A weary woman was Hina, and as the years grew on her she grew more and more weary. All day she sat outside her house beating out tapas for clothes for her family, making cloths out of the bark of a tree by beating it on a board with a mallet. Weary indeed was Hina with making tapas all the day outside her house. And when she might see no more to beat out the tapas , she would have to get her calabash and bring water to the house. Often she would stumble in the dark, coming back with her calabash of water. There was no one in her house to help her. Her son went sailing from island to island, robbing people, and her daughter went to live with the wild people in the forest. Her husband had become bad tempered, and he was always striving to make her do more and more work.

As Hina grew old she longed more and more to go to a place where she might sit and rest herself. And one day, when she was given a new task and was sent to fish up shrimps amongst the rocks with a net, she cried out, “Oh, that I might go away from this place, and to a place where I might stay and rest myself.” 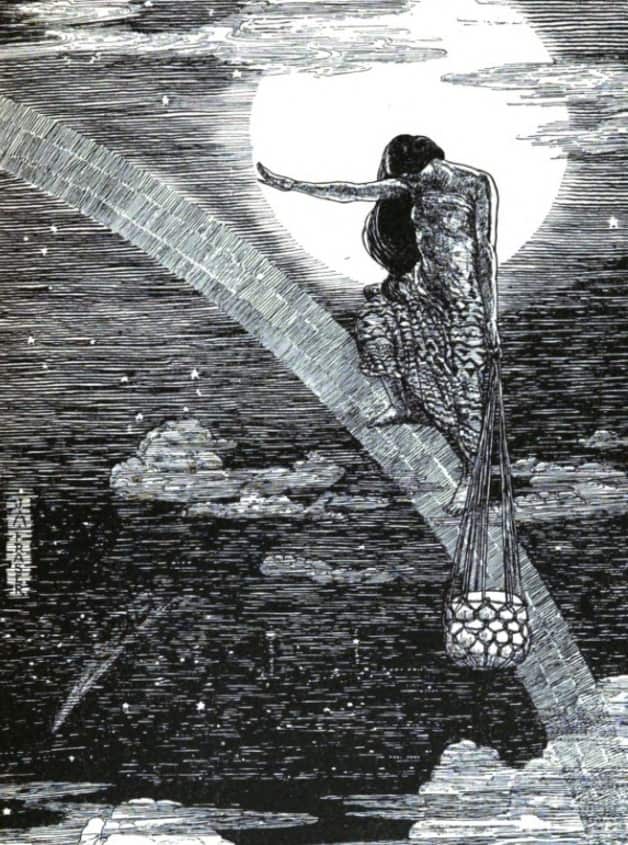 “It made an arching path for her from the rocks up to the heavens. With the net in her hands she went along that path.” Illustration by Juliette May Fraser, published in At the Gateways of the Day by Padraic Colum (1924), Oxford University Press.

She went higher and higher along the arch of the Rainbow. But as she went on, the rays of the Sun beat on her more and more strongly. She held the net over her head and went on and on. But when she went beyond the clouds and there was nothing to shelter her, the rays of the Sun burnt her terribly. On and on she went, but as she went higher she could only crawl along the path. Then the fire of the Sun’s rays began to torture her and shrivel her. She could go no farther, and, slipping back along the Rainbow arch, she came to earth again.

It was dark now. She stood outside her house and saw her husband coming back from the pool with a calabash of water, stumbling and saying ill-tempered words about her. And when she showed herself to him he scolded because she had not been there to bring the calabash of water to the house.

Now that the Sun was gone down and his rays were no longer upon her , her strength came back to Hina. She looked up into the sky , and she saw the full Moon there, and she said: “To the Moon I will go. It is very quiet, and there I can sit for a long, long time and rest myself. ”

But first she went into the house for the calabash that held all the things that on earth were precious to her. She came out of her house carrying the calabash, and there before her door was a moon-rainbow.

Her husband came and asked her where she was going; because she carried her calabash he knew she was going far. “I am going to the Moon, to a place where I can rest myself, ” she said. She began to climb along the arch of the Rainbow. And now she was almost out of her husband’ s reach. But he sprang up and caught her foot in his hand. He fell back, twisting and breaking her foot as he fell.

But Hina went on. She was lamed, and she was filled with pain; and yet she rejoiced as she went along through the quiet night. On and on she went. She came to where the Stars were, and she said incantations to them, that they might show her how to come to the Moon. And the Stars showed her the way, and she came at last to the Moon.

She came to the Moon with the calabash that had her precious possessions; and the Moon gave her a place where she might rest. There Hina stayed  And the people of Hawaii can look up to the bright Moon and see her there. She sits, her foot lamed, and with her calabash by her side. Seeing her there, the people call her, not “ Hina ” any more, but “Lono Moku” — that is, “Lame Lono.”

And standing outside the door you can see her now — Hina, the Woman in the Moon. But some say that , instead of the calabash , she took with her her tapa-board and mallet; and they say that the fine fleecy clouds that you see around the Moon are really the fine tapa-cloths that Hina beats out.