Once upon a time there lived a miller who was so rich that, when he was going to be married, he asked to the feast not only his own friends but also the wild animals who dwelt in the hills and woods round about. The chief of the bears, the wolves, the foxes, the horses, the cows, the goats, the sheep, and the reindeer, all received invitations; and as they were not accustomed to weddings they were greatly pleased and flattered, and sent back messages in the politest language that they would certainly be there.

The first to start on the morning of the wedding-day was the bear, who always liked to be punctual; and, besides, he had a long way to go, and his hair, being so thick and rough, needed a good brushing before it was fit to be seen at a party. However, he took care to awaken very early, and set off down the road with a light heart. Before he had walked very far he met a boy who came whistling along, hitting at the tops of the flowers with a stick.

‘Where are you going?’ said he, looking at the bear in surprise, for he was an old acquaintance, and not generally so smart.

‘Oh, just to the miller’s marriage,’ answered the bear carelessly. ‘Of course, I would much rather stay at home, but the miller was so anxious I should be there that I really could not refuse.’

‘Don’t go, don’t go!’ cried the boy. ‘If you do you will never come back! You have got the most beautiful skin in the world– just the kind that everyone is wanting, and they will be sure to kill you and strip you of it.’

‘I had not thought of that,’ said the bear, whose face turned white, only nobody could see it. ‘If you are certain that they would be so wicked–but perhaps you are jealous because nobody has invited you?’

‘Oh, nonsense!’ replied the boy angrily, ‘do as you see. It is your skin, and not mine; I don’t care what becomes of it!’ And he walked quickly on with his head in the air.

The bear waited until he was out of sight, and then followed him slowly, for he felt in his heart that the boy’s advice was good, though he was too proud to say so.

The boy soon grew tired of walking along the road, and turned off into the woods, where there were bushes he could jump and streams he could wade; but he had not gone far before he met the wolf.

‘Where are you going?’ asked he, for it was not the first time he had seen him.

‘Oh, just to the miller’s marriage,’ answered the wolf, as the bear had done before him. ‘It is rather tiresome, of course– weddings are always so stupid; but still one must be good-natured!’

‘Don’t go!’ said the boy again. ‘Your skin is so thick and warm, and winter is not far off now. They will kill you, and strip it from you.’

The wolf’s jaw dropped in astonishment and terror. ‘Do you really think that would happen?’ he gasped.

‘Yes, to be sure, I do,’ answered the boy. ‘But it is your affair, not mine. So good-morning,’ and on he went. The wolf stood still for a few minutes, for he was trembling all over, and then crept quietly back to his cave.

Next the boy met the fox, whose lovely coat of silvery grey was shining in the sun.

‘You look very fine!’ said the boy, stopping to admire him, ‘are you going to the miller’s wedding too?’

‘Yes,’ answered the fox; ‘it is a long journey to take for such a thing as that, but you know what the miller’s friends are like– so dull and heavy! It is only kind to go and amuse them a little.’

‘You poor fellow,’ said the boy pityingly. ‘Take my advice and stay at home. If you once enter the miller’s gate his dogs will tear you in pieces.’

‘Ah, well, such things have occurred, I know,’ replied the fox gravely. And without saying any more he trotted off the way he had come. 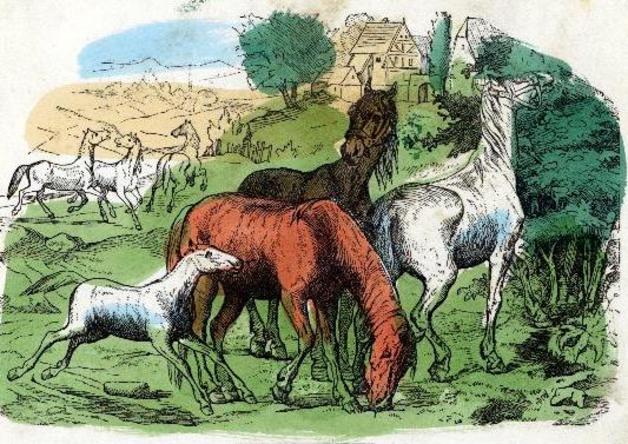 His tail had scarcely disappeared, when a great noise of crashing branches was heard, and up bounded the horse, his black skin glistening like satin.

‘Good-morning,’ he called to the boy as he galloped past, ‘I can’t wait to talk to you now. I have promised the miller to be present at his wedding-feast, and they won’t sit down till I come.’

‘Stop! stop!’ cried the boy after him, and there was something in his voice that made the horse pull up. ‘What is the matter?’ asked he.

‘You don’t know what you are doing,’ said the boy. ‘If once you go there you will never gallop through these woods any more. You are stronger than many men, but they will catch you and put ropes round you, and you will have to work and to serve them all the days of your life.’

The horse threw back his head at these words, and laughed scornfully.

‘Yes, I am stronger than many men,’ answered he, ‘and all the ropes in the world would not hold me. Let them bind me as fast as they will, I can always break loose, and return to the forest and freedom.’

And with this proud speech he gave a whisk of his long tail, and galloped away faster than before.

But when he reached the miller’s house everything happened as the boy had said. While he was looking at the guests and thinking how much handsomer and stronger he was than any of them, a rope was suddenly flung over his head, and he was thrown down and a bit thrust between his teeth. Then, in spite of his struggles, he was dragged to a stable, and shut up for several days without any food, till his spirit was broken and his coat had lost its gloss. After that he was harnessed to a plough, and had plenty of time to remember all he had lost through not listening to the counsel of the boy.

When the horse had turned a deaf ear to his words the boy wandered idly along, sometimes gathering wild strawberries from a bank, and sometimes plucking wild cherries from a tree, till he reached a clearing in the middle of the forest. Crossing this open space was a beautiful milk-white cow with a wreath of flowers round her neck.

‘Good-morning,’ she said pleasantly, as she came up to the place where the boy was standing.

‘Good-morning,’ he returned. ‘Where are you going in such a hurry?’

‘To the miller’s wedding; I am rather late already, for the wreath took such a long time to make, so I can’t stop.’

‘Don’t go,’ said the boy earnestly;’ when once they have tasted your milk they will never let you leave them, and you will have to serve them all the days of your life.’

‘Oh, nonsense; what do yon know about it?’ answered the cow, who always thought she was wiser than other people. ‘Why, I can run twice as fast as any of them! I should like to see anybody try to keep me against my will.’ And, without even a polite bow, she went on her way, feeling very much offended.

But everything turned out just as the boy had said. The company had all heard of the fame of the cow’s milk, and persuaded her to give them some, and then her doom was sealed. A crowd gathered round her, and held her horns so that she could not use them, and, like the horse, she was shut in the stable, and only let out in the mornings, when a long rope was tied round her head, and she was fastened to a stake in a grassy meadow.

And so it happened to the goat and to the sheep.

Last of all came the reindeer, looking as he always did, as if some serious business was on hand.

‘Where are you going?’ asked the boy, who by this time was tired of wild cherries, and was thinking of his dinner.

‘I am invited to the wedding,’ answered the reindeer, ‘and the miller has begged me on no account to fail him.’

‘O fool!’ cried the boy, ‘have you no sense at all? Don’t you know that when you get there they will hold you fast, for neither beast nor bird is as strong or as swift as you?’

‘That is exactly why I am quite safe,’ replied the reindeer. ‘I am so strong that no one can bind me, and so swift that not even an arrow can catch me. So, goodbye for the present, you will soon see me back.’

But none of the animals that went to the miller’s wedding ever came back. And because they were self-willed and conceited, and would not listen to good advice, they and their children have been the servants of men to this very day.

Prev Story Fortune and the Wood-Cutter
Next Story