There was once a King who had a son who asked in marriage the daughter of a mighty King; she was called Maid Maleen, and was very beautiful. As her father wished to give her to another, the prince was rejected; but as they both loved each other with all their hearts, they would not give each other up, and Maid Maleen said to her father, “I can and will take no other for my husband.”

Then the King flew into a passion, and ordered a dark tower to be built, into which no ray of sunlight or moonlight should enter. When it was finished, he said, “Therein shalt thou be imprisoned for seven years, and then I will come and see if thy perverse spirit is broken.”

Meat and drink for the seven years were carried into the tower, and then she and her waiting-woman were led into it and walled up, and thus cut off from the sky and from the earth. There they sat in the darkness, and knew not when day or night began. The King’s son often went round and round the tower, and called their names, but no sound from without pierced through the thick walls.

What else could they do but lament and complain? Meanwhile the time passed, and by the diminution of the food and drink they knew that the seven years were coming to an end. They thought the moment of their deliverance was come; but no stroke of the hammer was heard, no stone fell out of the wall, and it seemed to Maid Maleen that her father had forgotten her.

As they only had food for a short time longer, and saw a miserable death awaiting them, Maid Maleen said, “We must try our last chance, and see if we can break through the wall.” She took the bread-knife, and picked and bored at the mortar of a stone, and when she was tired, the waiting-maid took her turn.

With great labour they succeeded in getting out one stone, and then a second, and third, and when three days were over the first ray of light fell on their darkness, and at last the opening was so large that they could look out.

The sky was blue, and a fresh breeze played on their faces; but how melancholy everything looked all around! Her father’s castle lay in ruins, the town and the villages were, so far as could be seen, destroyed by fire, the fields far and wide laid to waste, and no human being was visible. When the opening in the wall was large enough for them to slip through, the waiting-maid sprang down first, and then Maid Maleen followed. But where were they to go?

The enemy had ravaged the whole kingdom, driven away the King, and slain all the inhabitants. They wandered forth to seek another country, but nowhere did they find a shelter, or a human being to give them a mouthful of bread, and their need was so great that they were forced to appease their hunger with nettles.

When, after long journeying, they came into another country, they tried to get work everywhere; but wherever they knocked they were turned away, and no one would have pity on them. At last they arrived in a large city and went to the royal palace. There also they were ordered to go away, but at last the cook said that they might stay in the kitchen and be scullions.

The son of the King in whose kingdom they were, was, however, the very man who had been betrothed to Maid Maleen. His father had chosen another bride for him, whose face was as ugly as her heart was wicked. The wedding was fixed, and the maiden had already arrived: because of her great ugliness, however, she shut herself in her room, and allowed no one to see her, and Maid Maleen had to take her her meals from the kitchen.

When the day came for the bride and the bridegroom to go to church, she was ashamed of her ugliness, and afraid that if she showed herself in the streets, she would be mocked and laughed at by the people. Then said she to Maid Maleen, “A great piece of luck has befallen thee.

I have sprained my foot, and cannot well walk through the streets; thou shalt put on my wedding-clothes and take my place; a greater honour than that thou canst not have!” Maid Maleen, however, refused it, and said, “I wish for no honour which is not suitable for me.” It was in vain, too, that the bride offered her gold.

At last she said angrily, “If thou dost not obey me, it shall cost thee thy life. I have but to speak the word, and thy head will lie at thy feet.” Then she was forced to obey, and put on the bride’s magnificent clothes and all her jewels.

When she entered the royal hall, every one was amazed at her great beauty, and the King said to his son, “This is the bride whom I have chosen for thee, and whom thou must lead to church.” 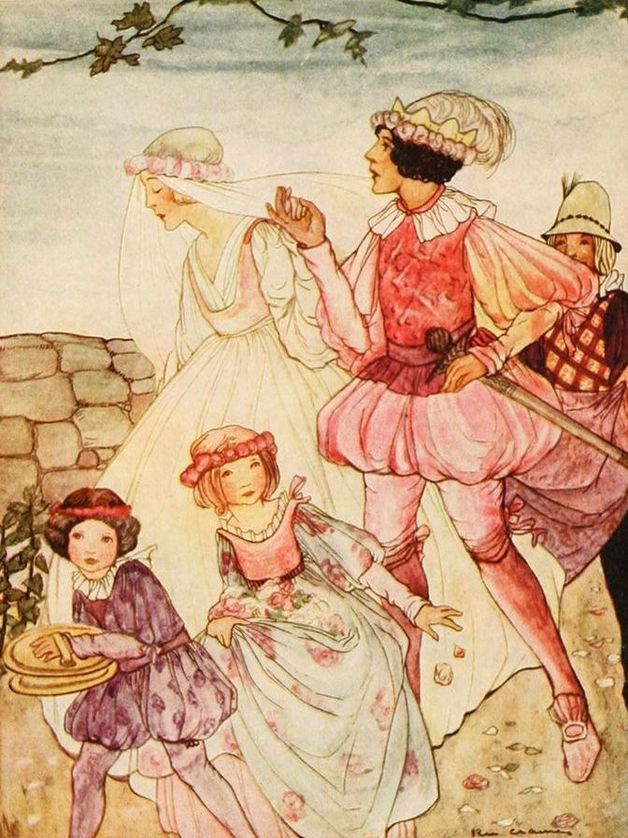 “The prince took her hand and led her to church.” Illustration by Rie Cramer. Published in Olcott’s Grimm’s Fairy Tales (1927). The Penn Publishing Company.

The bridegroom was astonished, and thought, “She is like my Maid Maleen, and I should believe that it was she herself, but she has long been shut up in the tower, or dead.” He took her by the hand and led her to church. On the way was a nettle-plant, and she said

“What art thou saying?” asked the King’s son.

“Nothing,” she replied, “I was only thinking of Maid Maleen.”

He was surprised that she knew about her, but kept silence. When they came to the foot-plank into the churchyard, she said,

“Foot-bridge, do not break,
I am not the true bride.”

“What art thou saying there?” asked the King’s son.

“Nothing,” she replied, “I was only thinking of Maid Maleen.”

“No,” she answered, “how should I know her; I have only heard of her.”

When they came to the church-door, she said once more,

“Church-door, break not,
I am not the true bride.”

“What art thou saying there?” asked he.

“Ah,” she answered, “I was only thinking of Maid Maleen.” Then he took out a precious chain, put it round her neck, and fastened the clasp. Thereupon they entered the church, and the priest joined their hands together before the altar, and married them.

He led her home, but she did not speak a single word the whole way. When they got back to the royal palace, she hurried into the bride’s chamber, put off the magnificent clothes and the jewels, dressed herself in her gray gown, and kept nothing but the jewel on her neck, which she had received from the bridegroom.

When the night came, and the bride was to be led into the prince’s apartment, she let her veil fall over her face, that he might not observe the deception. As soon as every one had gone away, he said to her, “What didst thou say to the nettle-plant which was growing by the wayside?”

“To which nettle-plant?” asked she; “I don’t talk to nettle-plants.” “If thou didst not do it, then thou art not the true bride,” said he.

So she bethought herself, and said,

“I must go out unto my maid,
Who keeps my thoughts for me.”

She went out and sought Maid Maleen.

“Girl, what hast thou been saying to the nettle?”

The bride ran back into the chamber, and said, “I know now what I said to the nettle,” and she repeated the words which she had just heard.

“But what didst thou say to the foot-bridge when we went over it?” asked the King’s son.

“Then thou art not the true bride.”

“I must go out unto my maid,
Who keeps my thoughts for me,”

And ran out and found Maid Maleen, “Girl, what didst thou say to the foot-bridge?”

“Foot-bridge, do not break,
I am not the true bride.”

“That costs thee thy life!” cried the bride, but she hurried into the room, and said, “I know now what I said to the foot-bridge,” and she repeated the words.

“But what didst thou say to the church-door?”

“Church-door, break not,
I am not the true bride.”

“That will break thy neck for thee!” cried the bride, and flew into a terrible passion, but she hastened back into the room, and said, “I know now what I said to the church-door,” and she repeated the words.

“But where hast thou the jewel which I gave thee at the church-door?”

“What jewel?” she answered; “thou didst not give me any jewel.”

“I myself put it round thy neck, and I myself fastened it; if thou dost not know that, thou art not the true bride.”

He drew the veil from her face, and when he saw her immeasureable ugliness, he sprang back terrified, and said, “How comest thou here? Who art thou?”

“I am thy betrothed bride, but because I feared lest the people should mock me when they saw me out of doors, I commanded the scullery-maid to dress herself in my clothes, and to go to church instead of me.”

She went out and told the servants that the scullery-maid was an impostor, and that they must take her out into the court-yard and strike off her head.

The servants laid hold of Maid Maleen and wanted to drag her out, but she screamed so loudly for help, that the King’s son heard her voice, hurried out of his chamber and ordered them to set the maiden free instantly. Lights were brought, and then he saw on her neck the gold chain which he had given her at the church-door.

“Thou art the true bride,” said he, “who went with me to church; come with me now to my room.”

When they were both alone, he said, “On the way to the church thou didst name Maid Maleen, who was my betrothed bride; if I could believe it possible, I should think she was standing before me thou art like her in every respect.”

She answered, “I am Maid Maleen, who for thy sake was imprisoned seven years in the darkness, who suffered hunger and thirst, and has lived so long in want and poverty. To-day, however, the sun is shining on me once more. I was married to thee in the church, and I am thy lawful wife.”

Then they kissed each other, and were happy all the days of their lives. The false bride was rewarded for what she had done by having her head cut off.

The tower in which Maid Maleen had been imprisoned remained standing for a long time, and when the children passed by it they sang,

“Kling, klang, gloria.
Who sits within this tower?
A King’s daughter, she sits within,
A sight of her I cannot win,
The wall it will not break,
The stone cannot be pierced.
Little Hans, with your coat so gay,
Follow me, follow me, fast as you may.”

Prev Story The Ear of Corn
Next Story