Pear Blossom had been the name of a little Korean maid who was suddenly left motherless. When her father, Kang Wa, who was a magistrate high in office, married again, he took for his wife a proud widow whose daughter, born to Kang Wa, was named Violet. Mother and daughter hated housework and made Pear Blossom clean the rice, cook the food and attend to the fire in the kitchen. They were hateful in their treatment of Pear Blossom, and, besides never speaking a kind word, called her Pigling, or Little Pig, which made the girl weep often. It did no good to complain to her father, for he was always busy. He smoked his yard-long pipe and played checkers hour by hour, apparently caring more about having his great white coat properly starched and lustred than for his daughter to be happy. His linen had to be beaten with a laundry club until it glistened like hoar frost, and, except his wide-brimmed black horsehair hat, he looked immaculately white when he went out of the house to the Government office.

Poor Pigling had to perform this task of washing, starching and glossing, in addition to the kitchen work and the rat-tat-tat of her laundry stick was often heard in the outer room till after midnight, when her heartless stepsister and mother had long been asleep. There was to be a great festival in the city and for many days preparations were made in the house to get the father ready in his best robe and hat, and the women in their finery, to go out and see the king and the royal procession. Poor Pigling wanted very much to have a look at the pageant, but the cruel stepmother, setting before her a huge straw bag of unhuUed rice and a big cracked water jar, told her she must husk all the rice, and, drawing water from the well, fill the crock to the brim before she dared to go out on the street. What a task to hull with her fingers three bushels of rice and fill up a leaky vessel! Pigling wept bitterly. How could it ever be done? 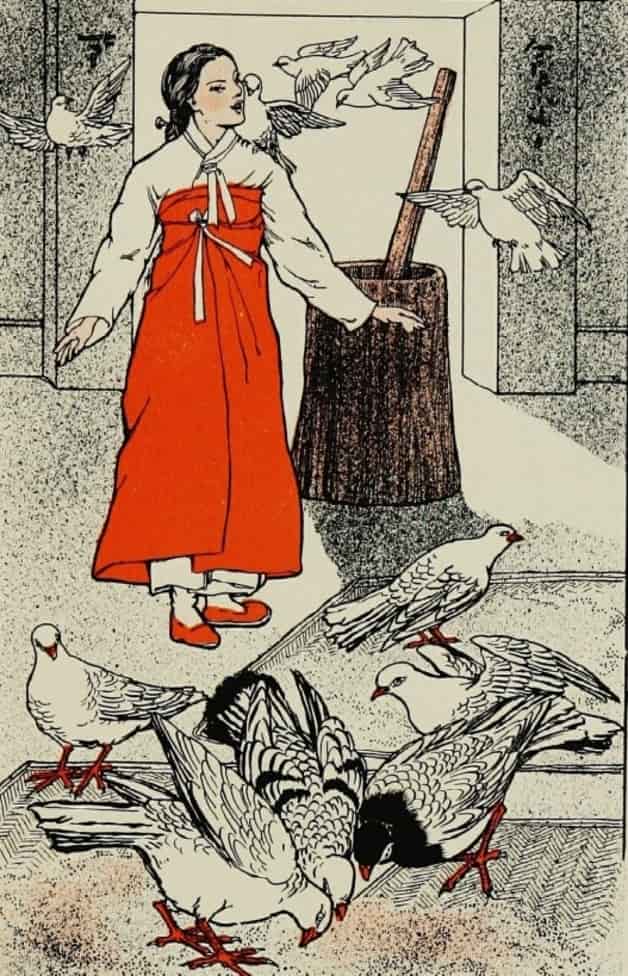 “She heard a whir and a rush of wings.” Illustration by unknown artist, published in The Unmannerly Tiger and other Korean Tales by William Elliot Griffis (1911), Thomas Y. Crowell Company.

While she was brooding thus and opening the straw bag to begin spreading the rice out on mats, she heard a whir and a rush of wings and down came a flock of pigeons. They first h’ghted on her head and shoulders, and then hopping to the floor began diligently, with beak and claw, and in a few minutes the rice lay in a heap, clean, white, and glistening, while with their pink toes they pulled away the hulls and put these in a separate pile. Then, after a great chattering and cooing, the flock was off and away. Pigling was so amazed at this wonderful work of the birds that she scarcely knew how to be thankful enough. But, alas, there was still the cracked crock to be filled. Just as she took hold of the bucket to begin there crawled out of the fire hole a sooty black imp, named Tokgabi. ” Don’t cry,” he squeaked out. ” I’ll mend the broken part and fill the big jar for you.” Forthwith, he stopped up the crack with clay, and pouring a dozen buckets of water from the well into the crock, it was filled to brimming and the water spilled over on all sides. Then Tokgabi the imp bowed and crawled into the flues again, before the astonished girl could thank her helper.

So Pigling had time to dress in her plain but clean clothes that were snow-white. She went off and saw the royal banners and the king’s grand procession of thousands of loyal men. The next time, the stepmother and her favorite daughter planned a picnic on the mountain. So the refreshments were prepared and Pigling had to work hard in starching the dresses to be worn —jackets, long skirts, belts, sashes, and what not, until she nearly dropped with fatigue. Yet instead of thanking and cheering her, the cruel stepmother told Pigling she must not go out until she had hoed all the weeds in the garden and pulled up all the grass between the stones of the walk. Again the poor girl’s face was wet with tears. She was left at home alone, while the others went off in fine clothes, with plenty to eat and drink, for a day of merrymaking. While weeping thus, a huge black cow came along and out of its great liquid eyes seemed to beam compassion upon the kitchen slave. Then, in ten mouthfuls, the animal ate up the weeds, and, between its hoof and lips, soon made an end of the grass in the stone pathway. With her tears dried Pigling followed this wonderful brute out over the meadows into the woods, where she found the most delicious fruit her eyes ever rested upon. She tasted and enjoyed, feasting to the full and then returned home.

When the jealous stepsister heard of the astonishing doings of the black cow, she determined to enjoy a feast in the forest also. So on the next gala-day she stayed home and let the kitchen drudge go to see the royal parade. Pigling could not understand why she was excused, even for a few hours, from the pots and kettles, but she was still more surprised by the gift from her stepmother of a rope of cash to spend for dainties. Gratefully thanking the woman, she put on her best clothes and was soon on the main street of the city enjoying the gay sights and looking at the happy people. There were tight rope dancing, music with drum and flute by bands of strolling players, tricks by conjurers and mountebanks, with mimicking and castanets, posturing by the singing girls and fun of all sorts. Boys peddling honey candy, barley sugar and sweetmeats were out by the dozen. At the eating-house. Pigling had a good dinner of fried fish, boiled rice with red peppers, turnips, dried persimmons, roasted chestnuts and candied orange, and felt as happy as a queen. The selfish stepsister had stayed home, not to relieve Pigling of work, but to see the wonderful cow. So, when the black animal appeared and found its friend gone and with nothing to do, it went off into the forest. The stepsister at once followed in the tracks of the cow that took it into its head to go very fast, and into unpleasant places. Soon the girl found herself in a swamp, wet, miry and full of brambles. Still hoping for wonderful fruit, she kept on until she was tired out and the cow was no longer to be seen. Then, muddy and bedraggled, she tried to go back, but the thorny bushes tore her clothes, spoiled her hands and so scratched her face that when at last, nearly dead, she got home, she was in rags and her beauty was gone.

But Pigling, rosy and round, looked so lovely that a young man from the south, of good family and at that time visiting the capital, was struck with her beauty. And as he wanted a wife, he immediately sought to find out where she lived. Then he secured a go-between who visited both families and made all the arrangements for the betrothal and marriage. Grand was the wedding. The groom, Su-wen, was dressed in white and black silk robes, with a rich horsehair cap and head-dress denoting his rank as a Yang-ban, or gentleman. On his breast, crossed by a silver-studded girdle, was a golden square embroidered with flying cranes rising above waves — the symbols of civil ofiice. He was tall, handsome, richly cultured, and quite famous as a writer of verses, besides being well read in the classics. Charming, indeed, looked Pear Blossom, in her robe of brocade, and long undersleeves which extended from her inner dress of snowwhite silk. Dainty were her red kid shoes curved upward at the toes. With a baldric of open-worked silver, a high-waisted long skirt, with several linings of her inner silk robes showing prettily at the neck, and the silver bridal ring on her finger, she looked as lovely as a princess. She wore a lofty head-dress of silk velvet decorated with tinsel and flowers, which were inwoven with her own long black tresses, while on her forehead was the crimson disk or spot denoting the bride. Long silvehairpins, tipped with jade, completed her headgear. The chief ornament of the bridal festival and symbol of undying love was that of a real, live goose. The wild geese, that soar in the sky, pluck pine branches from the north and carry them as tokens of return again to the far south. Graceful in flight, unwearied of wing, soaring high in the air above all danger of hunter, snare, trap, or arrow, the wild goose is the emblem of constancy, since it never seeks but one mate, and, losing that, takes none again. The snow-white wild goose is the pattern of marital virtue and the symbol of constancy in love.

So with her original name now restored, and henceforward called Ewa, or Pear Blossom, the daughter of Kang Wa was to be Mrs. Su-wen. It was astonishing what new interest the hitherto neglectful father took in his daughter as soon as she was sought for in marriage. Leaving her home in a palanquin borne by four lusty bearers, Pear Blossom went forth to live amid the rich rice fields of a southern province. Her home was with a father and mother-in-law, who, having no other children but their one son, became very fond of their new daughter. Summer after summer the pear trees bloomed and Ewa, the Pear Blossom, lived ever happily. As a good wife, she fulfilled in her life the significance of the symbol of marital bliss the figure of the wild goose, which flies far in the heavens, graceful and untiring, the mirror of loyalty and faithfulness and, from of old, reputed to have but one mate. Besides her bridal dower, her father asked Pear Blossom what she preferred as a special present. When she told him, he laughed heartily, even until his eyes, like two old roofspouts, leaked with tears. Nevertheless he fulfilled her wishes and to this day, in the boudoir of Pear Blossom, now Mrs. Su-wen, there stands ever, before the good wife and happy mother of sons, an earthen figure of a black cow moulded and baked from the clay of her home province, while under a pear tree that bursts into bloom every spring time and sheds on the ground a snowy shower that falls not from the skies, happy children play.

Prev Story The Fairy in the Cuckoo Clock
Next Story