About: The exotic world of Arabic fairy tales lets you immerse yourself in the myth and lore that inspired countless European folk tales and fairy stories. Arabian folk tales initiate the reader into mysterious kingdoms of untold wealth and unmatched beauty. They contain tales of genies and goblins, talking animals and heroic princes and princesses that charm and delight. Arabic folk tales circulated orally for thousands of years and are rooted in ancient and medieval culture and folklore including Egyptian, Persian, Indian and Mesopotamian influence. When Arabian fairy tales were first written down formally in the 14th century, they were contained in Syrian Arabic manuscript. 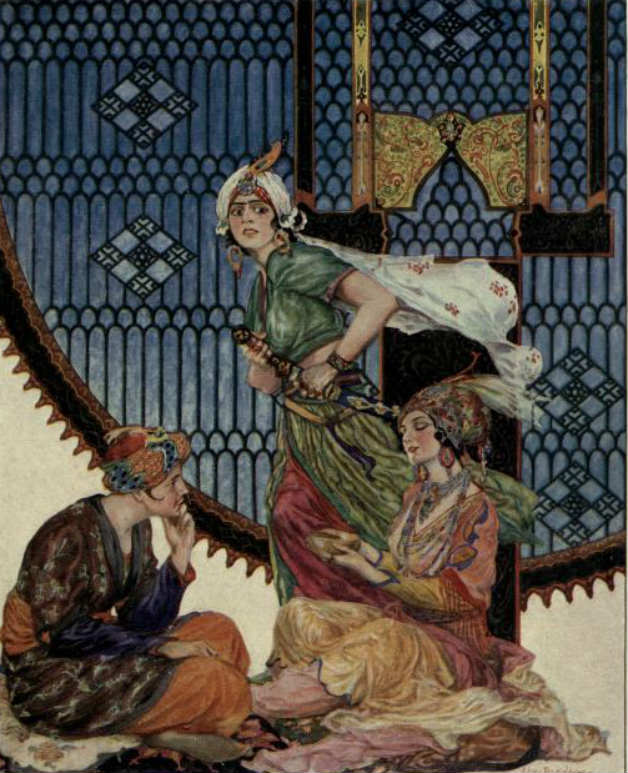 “She wore a magnificent necklace of jewels.” Illustration by Frances Jenkins Olcott from More Tales from the Arabian Nights by Edward William Lane, published 1915.

Some of the most famous Arabic folk tales are contained in One Thousand and One Nights, compiled during the Islamic Golden Age. The most popular edition of this collection of folk tales was published by Andrew Lang in 1898, and he renamed it The Arabian Nights Entertainments. The origins of the stories in this collection are complex. Iraqi influence is seen added to the stories in the 9th or 10th century, and the original few stories can be traced back to India and Persia in the 8th century. They are a rare gem for the literary world, and their roots and reach extend farther than can be measured. Other Arabic fairy tale collections include Folk-Lore and Legends: Oriental, a publication with an unknown author.

Arabic fairy tales were a source of entertainment and not tales for moral lessons and religious custom, unlike their European counterparts. The fairy tales are robust with themes of romance and magic that offered countless evenings of entertainment, and inspired a rich culture of fables, epic poems, historical anecdotes, songs and dance that have circulated the world over.