About: England has been the birthplace of many of the most well-known children’s stories including Jack and the Beanstalk and Tom Thumb- the little boy no bigger than his father’s thumb. Similar to other European countries, the English fairy tale tradition emerged from those folklore stories that are believed to have originated in the British Isles.  This folklore developed over centuries through the storytelling tradition and is unique given the distinct culture and identity of the land’s various regions. As such, England’s fairy tale and folklore tradition has strong connections to Celtic, Germanic and Christian sources. 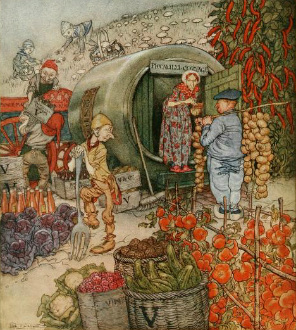 Jacobs was an Australian collector and publisher of England’s folklore, and authored  English Fairy Tales. The goal of his work was to popularize folk tales of England among children and adults, as many readers were caught up in the folk tales of Germany and France at the time. Jacobs is one of the most known English storytellers of folk tales and fairy tales, and his work also helped preserve ballads, after he wrote them as tales. He later published a second volume, More English Fairy Tales. Another notable literary figure in England’s folklore is Flora Annie Steel. Steel took on some of the popular folk tales in England at the time of publication, and shared them with a new audience.

The country’s folklore has its own dialect, with each region’s tale offering something new for the reader. The characters within the stories include mythical creatures or spirits such as brownies, elves, boggarts, ogres, giants and trolls. You’ll also encounter heroes, cunning folk (wizards), and plenty of royalty in the English folk tales. Many of the tales are rich in superstition, sharing rules about various folk beliefs.

Listen to English fairy tales and folktales plus hundreds of other fairy tale audiobooks in the Fairytalez Audio Book App for Apple and Android devices.