Long ago, in my grandmother’s time, the Carland was all in bogs, great pools of black water, and creeping trickles of green water, and squishy mools which squirted when you stepped on them.

Well, granny used to say how long before her time the Moon herself was once dead and buried in the marshes, and as she used to tell me, I’ll tell you all about it.

The Moon up yonder shone and shone, just as she does now, and when she shone she lighted up the bog-pools, so that one could walk about almost as safe as in the day.

But when she didn’t shine, out came the Things that dwelt in the darkness and went about seeking to do evil and harm; Bogles and Crawling Horrors, all came out when the Moon didn’t shine.

Well, the Moon heard of this, and being kind and good—as she surely is, shining for us in the night instead of taking her natural rest—she was main troubled. “I’ll see for myself, I will,” said she, “maybe it’s not so bad as folks make out.”

Sure enough, at the month’s end down she stept, wrapped up in a black cloak, and a black hood over her yellow shining hair. Straight she went to the bog edge and looked about her. Water here and water there; waving tussocks and trembling mools, and great black snags all twisted and bent. Before her all was dark—dark but for the glimmer of the stars in the pools, and the light that came from her own white feet, stealing out of her black cloak.

The Moon drew her cloak faster about and trembled, but she wouldn’t go back without seeing all there was to be seen; so on she went, stepping as light as the wind in summer from tuft to tuft between the greedy gurgling water holes. Just as she came near a big black pool her foot slipped and she was nigh tumbling in. She grabbed with both hands at a snag near by to steady herself with, but as she touched it, it twined itself round her wrists, like a pair of handcuffs, and gript her so that she couldn’t move. She pulled and twisted and fought, but it was no good. She was fast, and must stay fast.

Presently as she stood trembling in the dark, wondering if help would come, she heard something calling in the distance, calling, calling, and then dying away with a sob, till the marshes were full of this pitiful crying sound; then she heard steps floundering along, squishing in the mud and slipping on the tufts, and through the darkness she saw a white face with great feared eyes.

‘T was a man strayed in the bogs. Mazed with fear he struggled on toward the flickering light that looked like help and safety. And when the poor Moon saw that he was coming nigher and nigher to the deep hole, further and further from the path, she was so mad and so sorry that she struggled and fought and pulled harder than ever. And though she couldn’t get loose, she twisted and turned, till her black hood fell back off her shining yellow hair, and the beautiful light that came from it drove away the darkness. 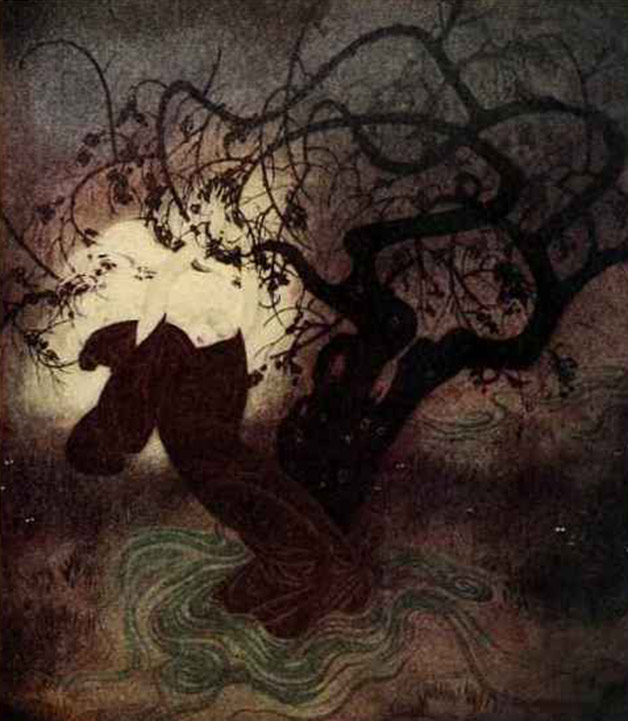 “In her frantic struggles the hood of her cloak fell back from her dazzling golden hair, and immediately the whole place was flooded with light.” Illustrated by Edward Dulac. Published in Edward Dulac’s Fairy Tale Book: Fairy Tales of the Allied Nations. George H. Duran and Company.

Oh, but the man cried with joy to see the light again. And at once all evil things fled back into the dark corners, for they cannot abide the light. So he could see where he was, and where the path was, and how he could get out of the marsh. And he was in such haste to get away from the Quicks, and Bogles, and Things that dwelt there, that he scarce looked at the brave light that came from the beautiful shining yellow hair, streaming out over the black cloak and falling to the water at his feet. And the Moon herself was so taken up with saving him, and with rejoicing that he was back on the right path, that she clean forgot that she needed help herself, and that she was held fast by the Black Snag.

So off he went; spent and gasping, and stumbling and sobbing with joy, flying for his life out of the terrible bogs. Then it came over the Moon, she would main like to go with him. So she pulled and fought as if she were mad, till she fell on her knees, spent with tugging, at the foot of the snag. And as she lay there, gasping for breath, the black hood fell forward over her head. So out went the blessed light and back came the darkness, with all its Evil Things, with a screech and a howl. They came crowding round her, mocking and snatching and beating; shrieking with rage and spite, and swearing and snarling, for they knew her for their old enemy, that drove them back into the corners, and kept them from working their wicked wills.

“Drat thee!” yelled the witch-bodies, “thou ‘st spoiled our spells this year agone!”

“And us thou sent’st to brood in the corners!” howled the Bogles.

And all the Things joined in with a great “Ho, ho!” till the very tussocks shook and the water gurgled. And they began again.

“We’ll smother her—smother her!” whispered the Crawling Horrors, and twined themselves round her knees.

And again they all shouted with spite and ill-will. And the poor Moon crouched down, and wished she was dead and done with.

And they fought and squabbled what they should do with her, till a pale grey light began to come in the sky; and it drew nigh the dawning. And when they saw that, they were feared lest they shouldn’t have time to work their will; and they caught hold of her, with horrid bony fingers, and laid her deep in the water at the foot of the snag. And the Bogles fetched a strange big stone and rolled it on top of her, to keep her from rising. And they told two of the Will-o-the-wykes to take turns in watching on the black snag, to see that she lay safe and still, and couldn’t get out to spoil their sport.

And there lay the poor Moon, dead and buried in the bog, till some one would set her loose; and who’d know where to look for her.

Well, the days passed, and ‘t was the time for the new moon’s coming, and the folk put pennies in their pockets and straws in their caps so as to be ready for her, and looked about, for the Moon was a good friend to the marsh folk, and they were main glad when the dark time was gone, and the paths were safe again, and the Evil Things were driven back by the blessed Light into the darkness and the waterholes.

“Well,” said she, after looking in the brewpot, and in the mirror, and in the Book, “it be main queer, but I can’t rightly tell ye what’s happened to her. If ye hear of aught, come and tell me.”

So they went their ways; and as days went by, and never a Moon came, naturally they talked—my word! I reckon they did talk! their tongues wagged at home, and at the inn, and in the garth. But so came one day, as they sat on the great settle in the Inn, a man from the far end of the bog lands was smoking and listening, when all at once he sat up and slapped his knee. “My faicks!” says he, “I’d clean forgot, but I reckon I kens where the Moon be!” and he told them of how he was lost in the bogs, and how, when he was nigh dead with fright, the light shone out, and he found the path and got home safe.

So off they all went to the Wise Woman, and told her about it, and she looked long in the pot and the Book again, and then she nodded her head.

“It’s dark still, childer, dark!” says she, “and I can’t rightly see, but do as I tell ye, and ye ‘ll find out for yourselves. Go all of ye, just afore the night gathers, put a stone in your mouth, and take a hazel-twig in your hands, and say never a word till you’re safe home again. Then walk on and fear not, far into the midst of the marsh, till ye find a coffin, a candle, and a cross. Then ye’ll not be far from your Moon; look, and m’appen ye ‘ll find her.”

So came the next night in the darklings, out they went all together, every man with a stone in his mouth, and a hazel-twig in his hand, and feeling, thou may’st reckon, main feared and creepy. And they stumbled and stottered along the paths into the midst of the bogs; they saw nought, though they heard sighings and flutterings in their ears, and felt cold wet fingers touching them; but all at once, looking around for the coffin, the candle, and the cross, while they came nigh to the pool beside the great snag, where the Moon lay buried. And all at once they stopped, quaking and mazed and skeery, for there was the great stone, half in, half out of the water, for all the world like a strange big coffin; and at the head was the black snag, stretching out its two arms in a dark gruesome cross, and on it a tiddy light flickered, like a dying candle. And they all knelt down in the mud, and said, “Our Lord, first forward, because of the cross, and then backward, to keep off the Bogles; but without speaking out, for they knew that the Evil Things would catch them, if they didn’t do as the Wise Woman told them.”

Then they went nigher, and took hold of the big stone, and shoved it up, and afterwards they said that for one tiddy minute they saw a strange and beautiful face looking up at them glad-like out of the black water; but the Light came so quick and so white and shining, that they stept back mazed with it, and the very next minute, when they could see again, there was the full Moon in the sky, bright and beautiful and kind as ever, shining and smiling down at them, and making the bogs and the paths as clear as day, and stealing into the very corners, as though she’d have driven the darkness and the Bogles clean away if she could.

Prev Story A Son of Adam
Next Story