Fairytalez.com » Carl Sandburg » The Story of Jason Squiff and Why He Had a Popcorn Hat, Popcorn Mittens and Popcorn Shoes

One day Jason Squiff came to the Bimber house and knocked on the door. “Did I understand’ he said, speaking to Mrs. Bimber, Blixie Bimber’s mother, “do I understand you sent for me to clean the cistern in your back yard? ”

“You understand exactly such,” said Mrs. Bimber, “and you are welcome as the flowers that bloom in the spring, tra-la-la.”

“Then I will go to work and clean the cistern, tra-la-la,” he answered, speaking to Mrs. Bimber.

“I’m the guy, tra-la-la,” he said further, running his excellent fingers through his greenish yellowish hair which was shining brightly.

He began cleaning the cistern. Blixie Bimber came out in the back yard. She looked down in the cistern. It was all dark. It looked like nothing but all dark down there. By and by she saw something greenish yellowish. She 80 Popcorn Hat, Mittens and Shoes watched it. Soon she saw it was Jason SquifPs head and hair. And then she knew the cistern was being cleaned and Jason Squiff was on the job. So she sang tra-la-la and went back into the house and told her mother Jason Squiff was on the job. The last bucketful of slush and mud came at last for Jason Squiff. He squinted at the bottom. Something was shining. He reached his fingers down through the slush and mud and took out what was shining. It was the gold buckskin whincher Blixie Bimber lost from the gold chain around her neck the week before when she was looking down into the cistern to see what she could see. It was exactly the same gold buckskin whincher shining and glittering like a sign of happiness.

“It’s luck,” said Jason Squiff, wiping his fingers on his greenish yellowish hair. Then he put the gold buckskin whincher in his vest pocket and spoke to himself again, “It’s luck.’

A little after six o’clock that night he stepped into his house and home and said hello to his wife and daughters. They all began to laugh. Their laughter was a ticklish laughter.

“Something funny is happening,” he said. 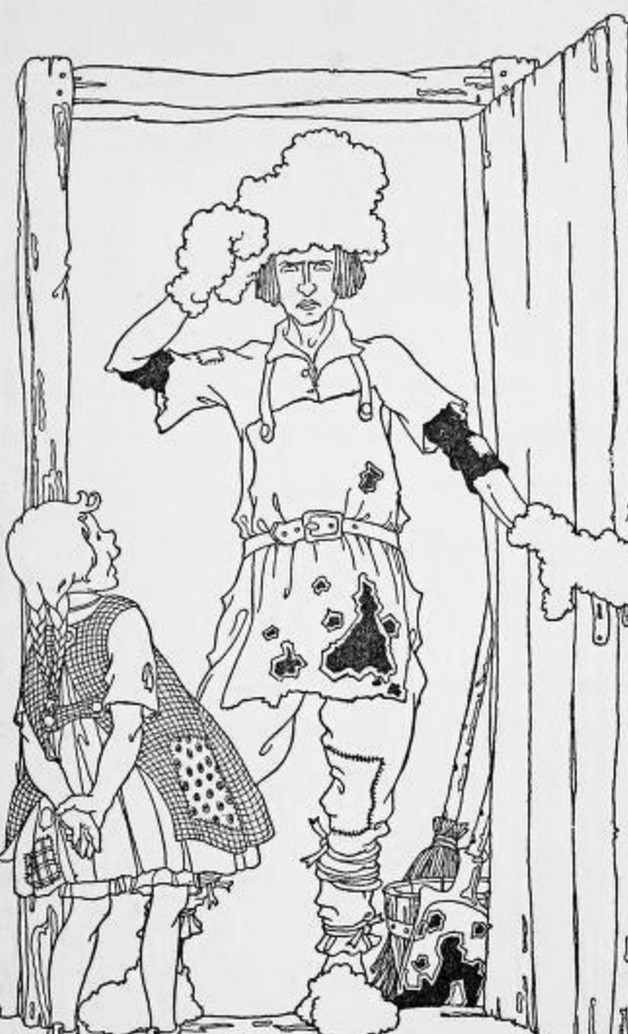 “And you are it,” they all laughed at him again with ticklish laughter. Then they showed him. His hat was popcorn, his mittens popcorn and his shoes popcorn. He didn’t know the gold buckskin whincher had a power and was working all the time. He didn’t know the whincher in his vest pocket was saying, “You have a letter Q in your name and because you have the pleasure and happiness of having a Q in your name you must have a popcorn hat, popcorn mittens and popcorn shoes.”

When he was down in a cistern the children enjoyed looking down into the cistern to see him work. When none of the slush and mud fell on his hat and mittens he was easy to find. The light of the shining popcorn lit up the whole inside of the cistern. Sometimes, of course, the white popcorn got full of black slush and black mud. And then when Jason Squiff came up and walked home he was not quite so dazzling to look at. It was a funny winter for Jason Squiff.

“It’s a crime, a dirty crime,” he said to himself. “Now I can never be alone with my thoughts. Everybody looks at me when I go up the street. If I meet a funeral even the pall bearers begin to laugh at my popcorn hat. If I meet people going to a wedding they throw all the rice at me as if I am a bride and a groom all together. The horses try to eat my hat wherever I go. Three hats I have fed to horses this winter. And if I accidentally drop one of my mittens the chickens eat it.”

When the boys yelled, “Snow man! yah-de- dah-de-dah, Snow man! He just waved his hand to them with an upward gesture of his arm to show he was proud of how he looked.

“They all watch for me,” he said to himself, “I am distinguished, am I not?” he asked himself. And he put his right hand into his left hand and shook hands with himself and said, “You certainly look fixed up.”

One day he decided to throw away his vest. In the vest pocket was the gold buckskin whincher, with the power working, the power saying, “You have a letter Q in your name and because you have the pleasure and happiness of having a Q in your name you must have a popcorn hat, popcorn mittens and popcorn shoes.’

After that Jason Squiff was like other people. His hats would never change to popcorn nor his mittens to popcorn nor his shoes to popcorn. And when anybody looked at him down in a cistern cleaning the cistern or when anybody saw him walking along the street they knew him by his greenish yellowish hair which was always full of bright lights. And so if you have a Q in your name, be careful if you ever come across a gold buckskin whincher. Remember different whinchers have different powers.

Prev Story The Story of Rags Habakuk, the Two Blue Rats, and the Circus Man Who Came with Spot Cash Money
Next Story

Prev Story The Story of Rags Habakuk, the Two Blue Rats, and the Circus Man Who Came with Spot Cash Money
Explore our fairy tale collections on