Fairytalez.com » Brothers Grimm » The Devil and His Grandmother

There was a great war, and the King had many soldiers, but gave them small pay, so small that they could not live upon it, so three of them agreed among themselves to desert. One of them said to the others, “If we are caught we shall be hanged on the gallows; how shall we manage it?”

Another said, “Look at that great cornfield, if we were to hide ourselves there, no one could find us; the troops are not allowed to enter it, and to-morrow they are to march away.”

They crept into the corn, only the troops did not march away, but remained lying all round about it. They stayed in the corn for two days and two nights, and were so hungry that they all but died, but if they had come out, their death would have been certain. Then said they, “What is the use of our deserting if we have to perish miserably here?”

But now a fiery dragon came flying through the air, and it came down to them, and asked why they had concealed themselves there?  They answered, “We are three soldiers who have deserted because the pay was so bad, and now we shall have to die of hunger if we stay here, or to dangle on the gallows if we go out.”

“If you will serve me for seven years,” said the dragon, “I will convey you through the army so that no one shall seize you.”

“We have no choice and are compelled to accept,” they replied. Then the dragon caught hold of them with his claws, and carried them away through the air over the army, and put them down again on the earth far from it; but the dragon was no other than the Devil. He gave them a small whip and said, “Whip with it and crack it, and then as much gold will spring up round about as you can wish for; then you can live like great lords, keep horses, and drive your carriages, but when the seven years have come to an end, you are my property.” 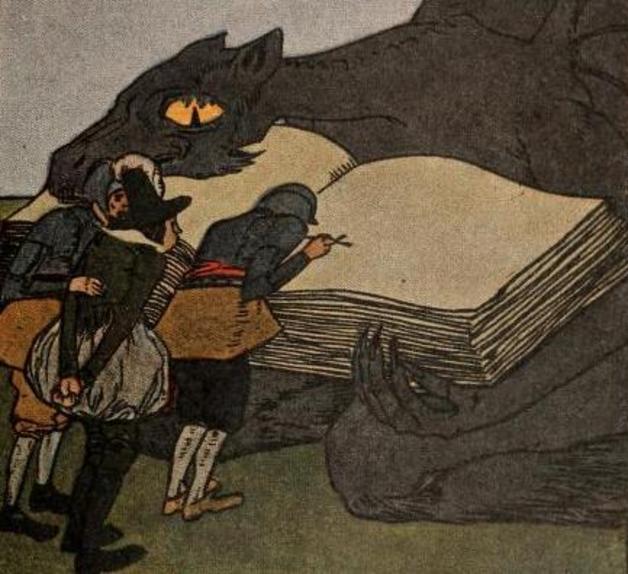 “Then he put before them a book which they were all three forced to sign.” Illustration by Albert Weisgerber, published in Kinder-Und by Wilhelm and Jacob Grimm, publication date unknown, Derlag von Martin Gerlach & Co.

Then he put before them a book which they were all three forced to sign. “I will, however, then set you a riddle,” said he, “and if you can guess that, you shall be free, and released from my power.”

Then the dragon flew away from them, and they went away with their whip, had gold in plenty, ordered themselves rich apparel, and travelled about the world. Wherever they were they lived in pleasure and magnificence, rode on horseback, drove in carriages, ate and drank, but did nothing wicked.

The time slipped quickly away, and when the seven years were coming to an end, two of them were terribly anxious and alarmed; but the third took the affair easily, and said, “Brothers, fear nothing, my head is sharp enough, I shall guess the riddle.”

They went out into the open country and sat down, and the two pulled sorrowful faces. Then an aged woman came up to them who inquired why they were so sad? “Alas!” said they, “how can that concern you? After all, you cannot help us.” “Who knows?” said she, “confide your trouble to me.”

So they told her that they had been the Devil’s servants for nearly seven years, and that he had provided them with gold as plentifully as if it had been blackberries, but that they had sold themselves to him, and were forfeited to him, if at the end of the seven years they could not guess a riddle.”

The old woman said, “If you are to be saved, one of you must go into the forest, there he will come to a fallen rock which looks like a little house, he must enter that, and then he will obtain help.”

The two melancholy ones thought to themselves, “That will still not save us,” and stayed where they were, but the third, the merry one, got up and walked on in the forest until he found the rock-house. In the little house, however, a very aged woman was sitting, who was the Devil’s grandmother, and asked the soldier where he came from, and what he wanted there?

He told her everything that had happened, and as he pleased her well, she had pity on him, and said she would help him. She lifted up a great stone which lay above a cellar, and said, “Conceal thyself there, thou canst hear everything that is said here; only sit still, and do not stir. When the dragon comes, I will question him about the riddle, he tells everything to me, so listen carefully to his answer.”

At twelve o’clock at night, the dragon came flying thither, and asked for his dinner. The grandmother laid the table, and served up food and drink, so that he was pleased, and they ate and drank together. In the course of conversation, she asked him what kind of a day he had had, and how many souls he had got?

“Nothing went very well to-day,” he answered, “but I have laid hold of three soldiers,—I have them safe.”

“Indeed! three soldiers, that’s something like, but they may escape you yet.”

The Devil said mockingly, “They are mine! I will set them a riddle, which they will never in this world be able to guess!”

“What riddle is that?” she inquired.

“I will tell you. In the great North Sea lies a dead dog-fish, that shall be your roast meat, and the rib of a whale shall be your silver spoon, and a hollow old horse’s hoof shall be your wine-glass.”

When the Devil had gone to bed, the old grandmother raised up the stone, and let out the soldier.

“Hast thou paid particular attention to everything?” “Yes,” said he, “I know enough, and will contrive to save myself.”

Then he had to go back another way, through the window, secretly and with all speed to his companions. He told them how the Devil had been overreached by the old grandmother, and how he had learned the answer to the riddle from him.

Then they were all joyous, and of good cheer, and took the whip and whipped so much gold for themselves that it ran all over the ground. When the seven years had fully gone by, the Devil came with the book, showed the signatures, and said, “I will take you with me to hell. There you shall have a meal! If you can guess what kind of roast meat you will have to eat, you shall be free and released from your bargain, and may keep the whip as well.”

Then the first soldier began and said, “In the great North Sea lies a dead dog-fish, that no doubt is the roast meat.”

The Devil was angry, and began to mutter “Hm! hm! hm!” and asked the second, “But what will your spoon be?”

“The rib of a whale, that is to be our silver spoon.”

The Devil made a wry face, again growled,”Hm! hm! hm!” and said to the third, “And do you also know what your wine-glass is to be?”

“An old horse’s hoof is to be our wine-glass.”

Then the Devil flew away with a loud cry, and had no more power over them, but the three kept the whip, whipped as much money for themselves with it as they wanted, and lived happily to their end.