Fairytalez.com » Andrew Lang's Fairy Books » The Owl and the Eagle

Once upon a time, in a savage country where the snow lies deep for many months in the year, there lived an owl and an eagle. Though they were so different in many ways they became great friends, and at length set up house together, one passing the day in hunting and the other the night. In this manner they did not see very much of each other–and perhaps agreed all the better for that; but at any rate they were perfectly happy, and only wanted one thing, or, rather, two things, and that was a wife for each.

‘I really am too tired when I come home in the evening to clean up the house,’ said the eagle.

‘And I am much too sleepy at dawn after a long night’s hunting to begin to sweep and dust,’ answered the owl. And they both made up their minds that wives they must have.

They flew about in their spare moments to the young ladies of their acquaintance, but the girls all declared they preferred one husband to two. The poor birds began to despair, when, one evening, after they had been for a wonder hunting together, they found two sisters fast asleep on their two beds. The eagle looked at the owl and the owl looked at the eagle.

‘They will make capital wives if they will only stay with us,’ said they. And they flew off to give themselves a wash, and to make themselves smart before the girls awoke.

For many hours the sisters slept on, for they had come a long way, from a town where there was scarcely anything to eat, and felt weak and tired. But by-and-by they opened their eyes and saw the two birds watching them. 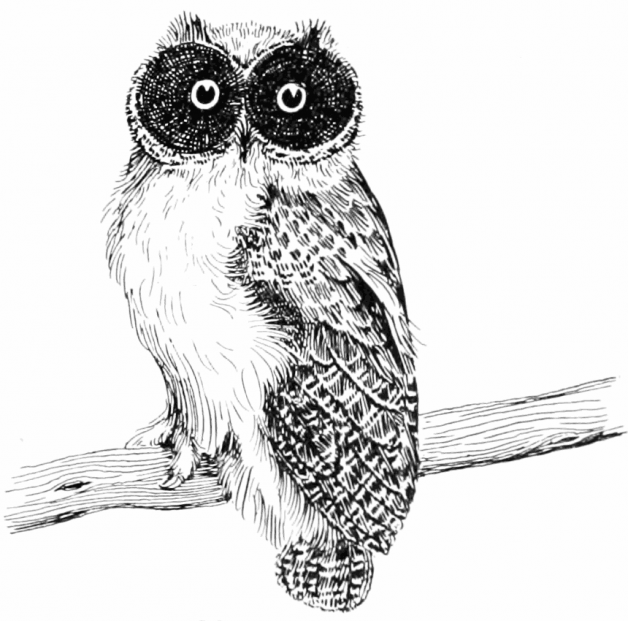 ‘I hope you are rested?’ asked the owl politely.

‘Oh, yes, thank you,’ answered the girls. ‘Only we are so very hungry. Do you think we could have something to eat?’

‘Certainly!’ replied the eagle. And he flew away to a farmhouse a mile or two off, and brought back a nest of eggs in his strong beak; while the owl, catching up a tin pot, went to a cottage where lived an old woman and her cow, and entering the shed by the window dipped the pot into the pail of new milk that stood there.

The girls were so much delighted with the kindness and cleverness of their hosts that, when the birds inquired if they would marry them and stay there for ever, they accepted without so much as giving it a second thought. So the eagle took the younger sister to wife, and the owl the elder, and never was a home more peaceful than theirs!

All went well for several months, and then the eagle’s wife had a son, while, on the same day, the owl’s wife gave birth to a frog, which she placed directly on the banks of a stream near by, as he did not seem to like the house. The children both grew quickly, and were never tired of playing together, or wanted any other companions.

One night in the spring, when the ice had melted, and the snow was gone, the sisters sat spinning in the house, awaiting their husbands’ return. But long though they watched, neither the owl nor the eagle ever came; neither that day nor the next, nor the next, nor the next. At last the wives gave up all hope of their return; but, being sensible women, they did not sit down and cry, but called their children, and set out, determined to seek the whole world over till the missing husbands were found.

Now the women had no idea in which direction the lost birds had gone, but they knew that some distance off was a thick forest, where good hunting was to be found. It seemed a likely place to find them, or, at any rate, they might hear something of them, and they walked quickly on, cheered by the thought that they were doing something. Suddenly the younger sister, who was a little in front, gave a cry of surprise.

‘Yes we shall,’ answered the elder; ‘I know what to do.’ And taking a long piece of string from her pocket, fastened it into the frog’s mouth, like a bit.

‘You must swim across the lake,’ she said, stooping to put him in, ‘and we will walk across on the line behind you.’ And so they did, till they got to about the middle of the lake, when the frog boy stopped.

‘I don’t like it, and I won’t go any further,’ cried he sulkily. And his mother had to promise him all sorts of nice things before he would go on again.

When at last they reached the other side, the owl’s wife untied the line from the frog’s mouth and told him he might rest and play by the lake till they got back from the forest. Then she and her sister and the boy walked on, with the great forest looming before them. But they had by this time come far and were very tired, and felt glad enough to see some smoke curling up from a little hut in front of them.

‘Let us go in and ask for some water,’ said the eagle’s wife; and in they went.

The inside of the hut was so dark that at first they could see nothing at all; but presently they heard a feeble croak from one corner. But sisters turned to look, and there, tied by wings and feet, and their eyes sunken, were the husbands that they sought. Quick as lightning the wives cut the deer- thongs which bound them; but the poor birds were too weak from pain and starvation to do more than utter soft sounds of joy. Hardly, however, were they set free, than a voice of thunder made the two sisters jump, while the little boy clung tightly round his mother’s neck.

‘What are you doing in my house?’ cried she. And the wives answered boldly that now they had found their husbands they meant to save them from such a wicked witch.

‘Well, I will give you your chance,’ answered the ogress, with a hideous grin; ‘we will see if you can slide down this mountain. If you can reach the bottom of the cavern, you shall have your husbands back again.’ And as she spoke she pushed them before her out of the door to the edge of a precipice, which went straight down several hundreds of feet. Unseen by the witch, the frog’s mother fastened one end of the magic line about her, and whispered to the little boy to hold fast the other. She had scarcely done so when the witch turned round.

‘You don’t seem to like your bargain,’ said she; but the girl answered:

‘Oh, yes, I am quite ready. I was only waiting for you!’ And sitting down she began her slide. On, on, she went, down to such a depth that even the witch’s eyes could not follow her; but she took for granted that the woman was dead, and told the sister to take her place. At that instant, however, the head of the elder appeared above the rock, brought upwards by the magic line. The witch gave a howl of disgust, and hid her face in her hands; thus giving the younger sister time to fasten the cord to her waist before the ogress looked up.

‘You can’t expect such luck twice,’ she said; and the girl sat down and slid over the edge. But in a few minutes she too was back again, and the witch saw that she had failed, and feared lest her power was going. Trembling with rage though she was, she dared not show it, and only laughed hideously.

‘I sha’n’t let my prisoners go as easily as all that!’ she said. ‘Make my hair grow as thick and as black as yours, or else your husbands shall never see daylight again.’

‘That is quite simple,’ replied the elder sister; ‘only you must do as we did–and perhaps you won’t like the treatment.’

‘If you can bear it, of course I can,’ answered the witch. And so the girls told her they had first smeared their heads with pitch and then laid hot stones upon them.

‘It is very painful,’ said they, ‘but there is no other way that we know of. And in order to make sure that all will go right, one of us will hold you down while the other pours on the pitch.’

And so they did; and the elder sister let down her hair till it hung over the witch’s eyes, so that she might believe it was her own hair growing. Then the other brought a huge stone, and, in short, there was an end of the witch. The sisters were savages who had never seen a missionary.

So when the sisters saw that she was dead they went to the hut, and nursed their husbands till they grew strong. Then they picked up the frog, and all went to make another home on the other side of the great lake.

Prev Story The Frog and Lion Fairy
Next Story