There was once a miller, who had a beautiful daughter, and as she was grown up, he wished that she was provided for, and well married. He thought, “If any good suitor comes and asks for her, I will give her to him.”

Not long afterwards, a suitor came, who appeared to be very rich, and as the miller had no fault to find with him, he promised his daughter to him. The maiden, however, did not like him quite so much as a girl should like the man to whom she is engaged, and had no confidence in him.

Whenever she saw, or thought of him, she felt a secret horror. Once he said to her, “Thou art my betrothed, and yet thou hast never once paid me a visit.” The maiden replied, “I know not where thy house is.”

Then said the bridegroom, “My house is out there in the dark forest.” She tried to excuse herself, and said she could not find the way there. The bridegroom said, “Next Sunday thou must come out there to me; I have already invited the guests, and I will strew ashes in order that thou mayst find thy way through the forest.”

When Sunday came, and the maiden had to set out on her way, she became very uneasy, she herself knew not exactly why, and to mark her way she filled both her pockets full of peas and lentils. Ashes were strewn at the entrance of the forest, and these she followed, but at every step she threw a couple of peas on the ground. She walked almost the whole day until she reached the middle of the forest, where it was the darkest, and there stood a solitary house, which she did not like, for it looked so dark and dismal. She went inside it, but no one was within, and the most absolute stillness reigned. Suddenly a voice cried,

The maiden looked up, and saw that the voice came from a bird, which was hanging in a cage on the wall. Again it cried,

Then the young maiden went on farther from one room to another, and walked through the whole house, but it was entirely empty and not one human being was to be found. At last she came to the cellar, and there sat an extremely aged woman, whose head shook constantly.

“Can you not tell me,” said the maiden, “if my betrothed lives here?” 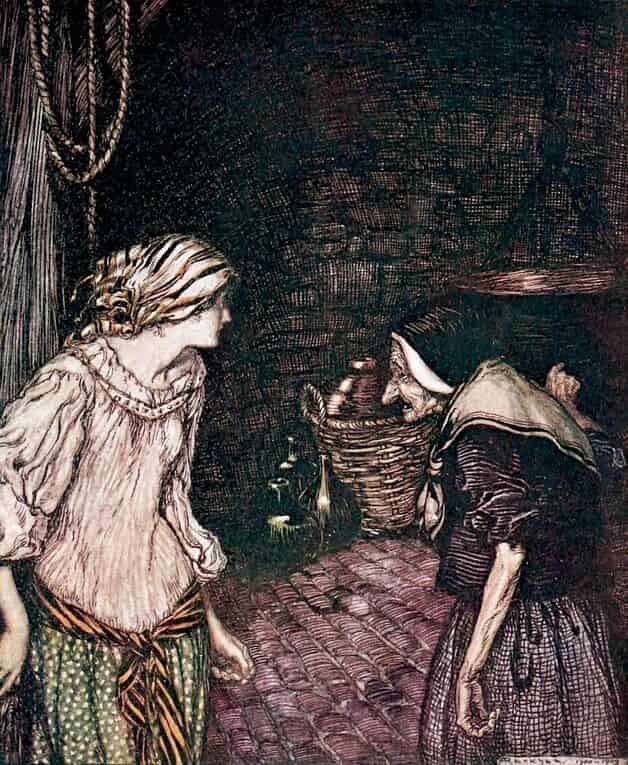 “The old woman.” Illustration by Arthur Rackham, published in The Fairy Tales of the Brothers Grimm by Jacob and Wilhem Grimm (1909), Doubleday, Page.

“Alas, poor child,” replied the old woman, “whither hast thou come? Thou art in a murderer’s den. Thou thinkest thou art a bride soon to be married, but thou wilt keep thy wedding with death. Look, I have been forced to put a great kettle on there, with water in it, and when they have thee in their power, they will cut thee to pieces without mercy, will cook thee, and eat thee, for they are eaters of human flesh. If I do not have compassion on thee, and save thee, thou art lost.

Thereupon the old woman led her behind a great hogshead where she could not be seen. “Be as still as a mouse,” said she, “do not make a sound, or move, or all will be over with thee. At night, when the robbers are asleep, we will escape; I have long waited for an opportunity.”

Hardly was this done, than the godless crew came home. They dragged with them another young girl. They were drunk, and paid no heed to her screams and lamentations. They gave her wine to drink, three glasses full, one glass of white wine, one glass of red, and a glass of yellow, and with this her heart burst in twain. Thereupon they tore off her delicate raiment, laid her on a table, cut her beautiful body in pieces and strewed salt thereon.

The poor bride behind the cask trembled and shook, for she saw right well what fate the robbers had destined for her. One of them noticed a gold ring on the little finger of the murdered girl, and as it would not come off at once, he took an axe and cut the finger off, but it sprang up in the air, away over the cask and fell straight into the bride’s bosom. The robber took a candle and wanted to look for it, but could not find it. Then another of them said, “Hast thou looked behind the great hogshead?” But the old woman cried, “Come and get something to eat, and leave off looking till the morning, the finger won’t run away from you.”

Then the robbers said, “The old woman is right,” and gave up their search, and sat down to eat, and the old woman poured a sleeping- draught in their wine, so that they soon lay down in the cellar, and slept and snored. When the bride heard that, she came out from behind the hogshead, and had to step over the sleepers, for they lay in rows on the ground, and great was her terror lest she should waken one of them. But God helped her, and she got safely over.

The old woman went up with her, opened the doors, and they hurried out of the murderers’ den with all the speed in their power. The wind had blown away the strewn ashes, but the peas and lentils had sprouted and grown up, and showed them the way in the moonlight. They walked the whole night, until in the morning they arrived at the mill, and then the maiden told her father everything exactly as it had happened.

When the day came when the wedding was to be celebrated, the bridegroom appeared, and the Miller had invited all his relations and friends. As they sat at table, each was bidden to relate some- thing. The bride sat still, and said nothing. Then said the bride- groom to the bride, “Come, my darling, dost thou know nothing? Relate something to us like the rest.” She replied, “Then I will relate a dream. I was walking alone through a wood, and at last I came to a house, in which no living soul was, but on the wall there was a bird in a cage which cried,

And this it cried once more. ‘My darling, I only dreamt this. Then I went through all the rooms, and they were all empty, and there was something so horrible about them! At last I went down into the cellar, and there sat a very very old woman, whose head shook; I asked her, ‘Does my bridegroom live in this house?’

She answered, ‘Alas, poor child, thou hast got into a murderer’s den, thy bridegroom does live here, but he will hew thee in pieces, and kill thee, and then he will cook thee, and eat thee.’ My darling, I only dreamt this. But the old woman hid me behind a great hogshead, and, scarcely was I hidden, when the robbers came home, dragging a maiden with them, to whom they gave three kinds of wine to drink, white, red, and yellow, with which her heart broke in twain. My darling, I only dreamt this. Thereupon they pulled off her pretty clothes, and hewed her fair body in pieces on a table, and sprinkled them with salt. My darling, I only dreamt this. And one of the robbers saw that there was still a ring on her little finger, and as it was hard to draw off, he took an axe and cut it off, but the finger sprang up in the air, and sprang behind the great hogshead, and fell in my bosom. And there is the finger with the ring!” And with these words she drew it forth, and showed it to those present.

The robber, who had during this story become as pale as ashes, leapt up and wanted to escape, but the guests held him fast, and delivered him over to justice. Then he and his whole troop were executed for their infamous deeds.

The Elves (The Shoemaker and the Elves)

The Elves (The Shoemaker and the Elves)