J.R.R Tolkien, author of The Lord of the Rings, The Hobbit, and several other books, created a fantasy world beyond compare. The legacy of his novels lives on in film, likely because of the rich world he invented. As a fan of fairy tales and folklore, J.R.R. Tolkien was greatly influenced by these stories in his own work. J.R.R Tolkien, author of The Lord of the Rings, The Hobbit, and several other books, created a fantasy world beyond compare. The legacy of his novels lives on in film, likely because of the rich world he invented. As a fan of fairy tales and folklore, J.R.R. Tolkien was greatly influenced by these stories in his own work.

Tolkien had a lifelong fascination with mythology and fairy tales as bearers of cultural legacy, beginning from his childhood, where he became fascinated with the tales of George MacDonald, and the fairy tales his other told him from her English childhood.

In his classic essay, “On Fairy Stories,” Tolkien teaches students how to appreciate fairy tales. The essay originally began as a discussion in the Andrew Lang Lecture Series at the University of St. Andrews, and was originally titled “Fairy Stories.”

Tolkien expands the definition of fairy tales by noting that “Most good ‘fairy-stories’ are about the adventures of men in the Perilous Realm or upon its shadowy marches” rather than about supernatural creatures. Tolkien believed the stories’ power was drawn from the way they teach people about themselves, similar to how the Brothers Grimms stores were used as moral lessons.

“Faerie contains many things besides elves and fays, and besides dwarfs, witches, trolls, giants, or dragons: it holds the seas, the sun, the moon, the sky; and the earth, and all things that are in it: tree and bird, water and stone, wine and bread, and ourselves, mortal men, when we are enchanted.”

Tolkien studied Germanic and Norse mythology extensively and their influence has been widely noted in his literary works. He even formed a club, The Coalbiters, while at Oxford University; the club’s purpose was to read and translate Icelandic myths. However, one of Tolkien’s chief concerns was that there was no pre-Christian mythology linked specifically to the English people. As a result, he sought to reconstruct a kind of pagan history of England, using sources from Scandinavian and Germanic mythology and folklore, Old English poetry and literature and English folk tales. Tolkien’s books and stories derive their structure from heroic epics such as the Norse Eddas and Homer’s Illiad, plus elements of Arthurian legend.

Enchanted items abound in fairy tales and appear frequently throughout Tolkien’s books. The most well-known magical item from Tolkien is “the ring,” which Frodo and his friends must destroy. Rings are not always filled with bad intentions, for in some tales the ring symbolizes love or eternity, as they do in modern wedding ceremonies. The ring in the French tale Prince Darling is a gift from a good fairy which is designed to keep the prince on the straight and narrow: the ring pricks the owner’s finger whenever he does something evil. Prince Darling was collected by Andrew Lang in 1889’s The Blue Fairy Book.

Rings also have gift-granting potential in stories. Tolkien certainly imbued his mythical “one ring to rule them all” with mystical ability to make the wearer powerful. This is borrowed from fairy tales like The Bronze Ring, a Czech story where the ring will immediately grant the owner anything he or she wishes for.

Fairy stories imbue mirrored objects with special powers. The Evil Queen’s mirror in Snow White is undoubtedly the most memorable use of a mystical mirror:

Mirror, mirror, in my hand, Who is the fairest in the land? Fair there be both near and far, But queen, of them you the fairest are.

Hans Christian Anderson’s The Snow Queen also features a magic mirror. In the Snow Queen, an evil troll created a looking glass that distorts the appearance of things. It magnifies the most ruthless aspects of the person reflected in the mirror, while hiding all their positive traits. The mirror shatters and splinters and is scattered throughout the world, where it freezes people’s hearts and makes their eyes only able to see the bad in people and things.

In Lord of the Rings, Queen Galadriel has the gift of prophesy when she views a small mirrored pool, known as Mirror of Galadriel. When Frodo meets Galadriel, she shows him the horrible consequences that will come to pass if he fails at his task of destroying the ring. 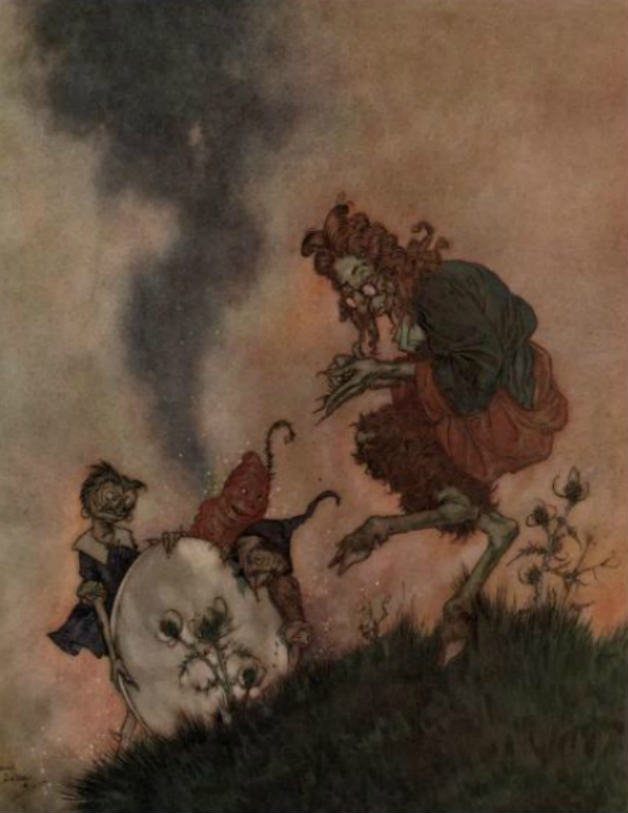 “One day he was in a state of high delight because he had invented a mirror.” Illustration by Edward Dulac. Published in Stories from Hans Andersen (1911), Hodder and Stoughton.

Dragons are the most common obstacle for heroes in stories from around the world. Fairy tales tend to emphasize slaying a dragon as a means to become a king, which is what happens in The Dragon of the North and the Icelandic tale, The Story of Sigurd.

The idea of slaying a dragon appeared also in myths and legends and in Beowulf. Tolkien was one of the foremost experts on the Middle Ages poem Beowulf, the oldest surviving poem in Old English. In Beowulf, the titular hero battles dragons. When Tolkien wrote The Hobbit, he drew directly from Beowulf, creating a hero called Bilbo Baggins who must face a monstrous dragon. 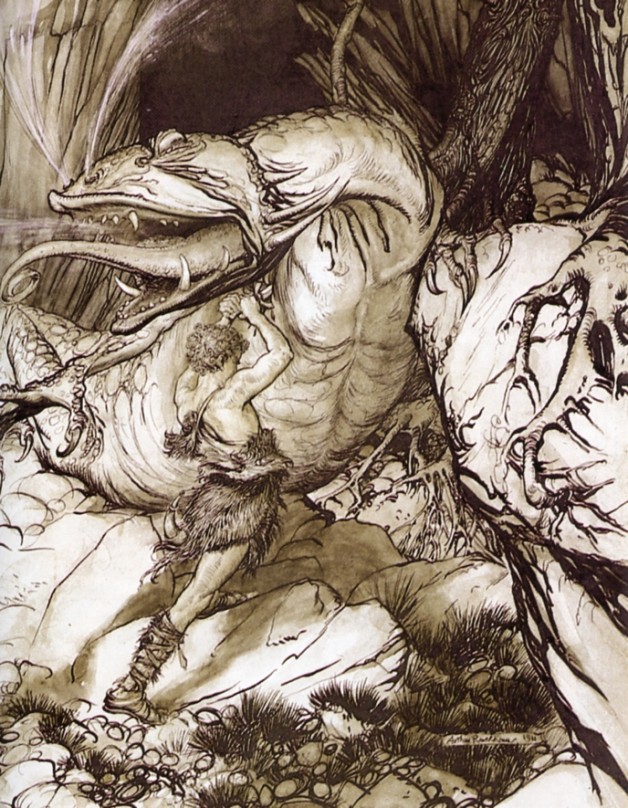 “Sigurd kills Fafnir.” Illustration by Arthur Rackham. Published in Siegfried and the Twilight of the Gods by Richard Wagner (1911), Doubleday, Page

Trolls are a common feature to many fairy tales and they are present in most of Tolkien’s quests. In the Norwegian fairy tale The Cat and the Troll (also known as The Cat on the Dovrefell), the troll is a three-headed carnivorous monster. Tolkien’s trolls also can turn to stone when exposed to sunlight, just as in the “Cat and the Troll.” In other tales, trolls are more like well-meaning tricksters. For example, in the Danish tale “Skotte” (or “The Troll and the Beer”) the villagers are warned to always put a cross on their beer cask, or else the trolls would steal the beer. Skotte the troll falls into the fire during his quest for the beer.

Dwarfs traditionally are presented as special guardians of magical things. They are miners, as depicted in both The Lord of the Rings and Snow White and the Seven Dwarves.

In fairy tales, elves figure prominently as clever tricksters. Over time, European versions of elven people became intertwined with fairies, and in many cases are often indistinguishable. They are smaller creatures who are usually winged. The frivolity among the Shakespearean elves of A Midsummer Night’s Dream is probably drawn from the many fairy tales about elves and fairies. Those versions of elves emphasize that they are clever and tricky and occasionally cruel, but never wholly evil. The three stories that make up the Grimm’s The Shoemaker and the Elves demonstrate these qualities. The tales show a couple of benevolent elves (Shoemaker), some canny elves (they keep a poor servant girl for seven years and return her after her presumably bad masters are dead) and trickster elves (shapeshifters who steal and return a baby).

In other iterations, elves are young, beautiful women. This is particularly true in Scandinavian tales. A tale from Lapland called The Elf Maiden tells the love story of a human man and an immortal elf. Tolkien’s inspiration for his elves hews closer to this depiction. As part of his mythological history of Middle Earth, he tells and retells the story of “Beren and Lúthien.” Beren is a mortal man and Luthien an immoral elven woman. In his Book of Lost Tales the two fall in love. Their love story is recounted by Aragorn in The Fellowship of the Ring and is told once more in The Silmarillion. Of course in The Lord of the Rings, the immortal elf Arwen falls in love with the man-king Aragorn. The tale of Beren and Lúthien may have been inspired by the German folk tale The Devil with the Three Golden Hairs. In this story, a poor young man is slated to marry a beautiful princess, but her father gives him impossible tasks in order to get rid of the suitor. Tolkien’s version finds Lúthien’s father the elf-king Thingol sends Beren on an impossible quest to get the three Simarils. Tolkien’s elves are the most spiritual beings in his books. They are connected to the ancient historical world that Tolkien created, Middle Earth. Tolkien’s conception of elves as being more like humans than fairies had a profound impact on science fiction and fantasy.

These are just a few of the fairy tale and folklore influences in J.R.R. Tolkien’s work. By reading these stories and his books, you may find even more! Here are the tales we discussed, and you can read these, and over 2,000 more at Fairytalez.com!

The Story of Sigurd

The Cat and the Troll

The Devil with the Three Golden Hairs

The Shoemaker and the Elves

2 Responses to Fairy Tales and Folklore in Tolkien's World