Fairytalez.com » Blog » A Prince Who is a Beast: The Search for the Lost Husband in Fairy Tales "The lad in the bear skin and the King of Arabia's daughter." Illustration by Kay Nielsen, published in East of the Sun and West of the Moon: Old Tales from the Norse Illustrated by Peter Christen Asbjørnsen and Jørgen Moe (1914), George Duran Company.

The Aarne-Thompson Classification System classifies folk tale types or fairy tales using the motifs or themes of the story. Stories that labeled type 400 to 459 are about “Supernatural or enchanted relatives,” and 425A is the “Search for the Lost Husband”; 425C refers to the Beauty and the Beast theme. We previously shared the history of Beauty and the Beast, along with other 425C stories, so we thought we’d dive more into the Search for the Lost Husband, fairy tales that are type 425A. 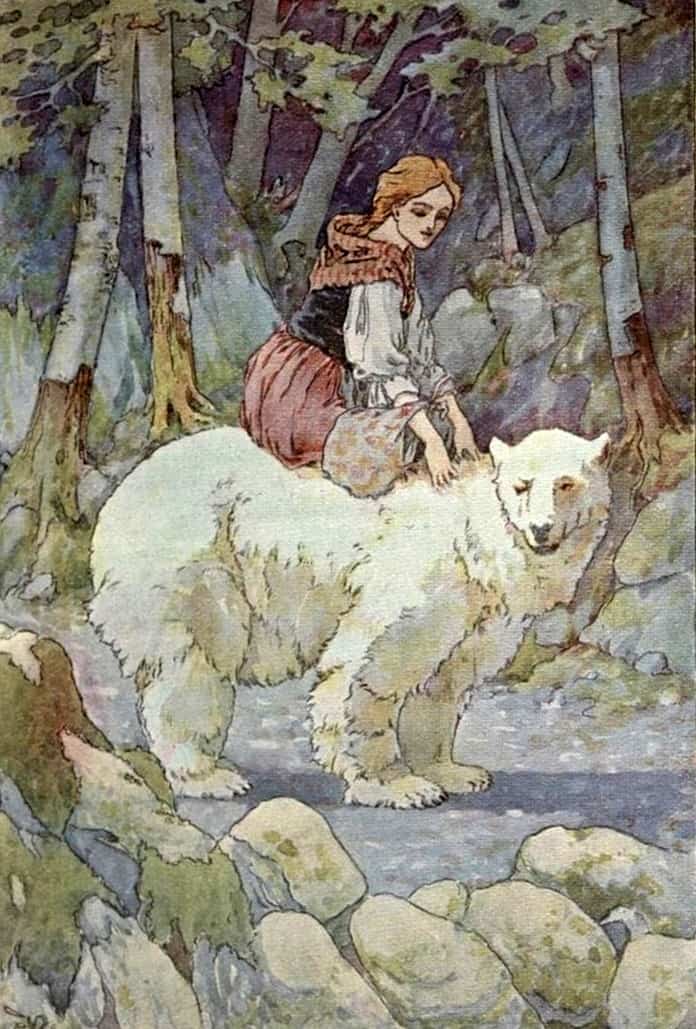 “Are you afraid?” Illustration by Frederick Richardson, published in East o’ the Sun and West o’ the Moon, with Other Norwegian Folk Tales by Peter Christen Ambjørnsen, Jørgen Engebretsen Moe and Gudrun Thorne-Thomsen (1912), Row, Peterson and Company.

A great White Bear waits outside. He has faithfully promised to make us all rich if he can but have our youngest daughter.

Characteristics of Type 425A Fairy Tales

The Enchanted Pig is a Romanian fairy tale about a king’s daughter who is fated to marry a “pig from the North.” She doesn’t want to, however, her father convinces her the pig must be under a magic spell, and she agrees, then heads to his castle to be his bride. This fairy tale is a 26 minute Intermediate read and was published by Andrew Lang in the The Red Fairy Book.

East of the Sun and West of the Moon

This is one of the more popular fairy tales of this type, and comes to us from Norway. It’s a 25 minute Intermediate read. Here the bride is a daughter of a peasant, and marries the bear in exchange for her father gaining riches. East of the Sun and West of the Moon was authored by Peter Christen Asbjørnsen and Jørgen Moe for their collection, Norske folkeeventyr.

In the Italian fairy tale The Enchanted Snake, a snake is raised by a woman who longs for a child. After the snake grows up, he wishes to marry a princess. The story was authored by Giambattista Basile for his collection The Pentamerone, and is a 17-minute Intermediate read.

A Sprig of Rosemary

A Sprig of Rosemary is an Intermediate Spanish fairy tale published by Andrew Lang in the Pink Fairy Book and may be read in 11 minutes. This fairy tale is unusual compared to other stories that are type 425A, because the husband is a magician who can change his shape; his animal form isn’t the result of an enchantment.

The Brown Bear of Norway

A 19-minute Intermediate tale, The Brown Bear of Norway is an Irish fairy tale originally published by author Patrick Kennedy in 1866. The story was later collected by Andrew Lang, who shared it in The Lilac Fairy Book.

The Tale of the Hoodie

A bear or beast isn’t the only enchanted form that the prince may have in these types of fairy tales. In The Tale of the Hoodie by John Francis Campbell, the prince is a hoodie, also known as a hooded crow. The Easy fairy tale can be read in 7 minutes and features a twist from other type 425A fairy tales, as the bride is allowed to choose whether the crow will be a man by day or by night. 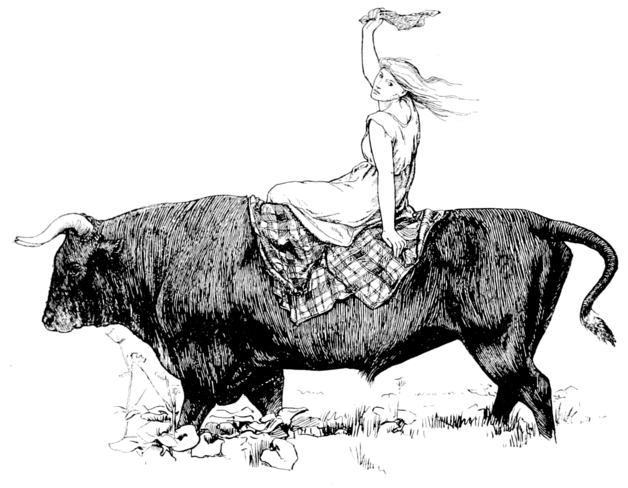 “She was lifted on his back and away they went.” Illustration by John Batten published in More English Fairy Tales by Joseph Jacobs (1894), David Nutt.

The Black Bull of Norroway

Like in East of the Sun and West of the Moon, here the husband is a giant animal upon which the bride can ride. A 9-minute read, The Black Bull of Norroway features a large bull who gets separated from his bride when she is left in a valley of glass. This Scottish fairy tale was re-published by Joseph Jacobs and is an Intermediate read.

White-Bear-King-Valemon or King Valemon, The White Bear comes to us from the Tales of the Fjeld: A Second Series of Popular Tales from the Norse. This fairy tale has traces of East of the Sun, West of the Moon and is an 17-minute Intermediate read.

The Daughter of the Skies

The Daughter of the Skies by J.F. Campbell is a 5 minute, Easy read which comes from Scotland. This folk tale features the husband as a dog, however, he goes to the skies, so the author notes he may be a “Gaelic deity.”

East of the Sun, West of the Moon

The Daughter of the Skies

A Sprig of Rosemary

The Black Bull of Norroway

The Tale of the Hoodie

Beauty and the Beast