Fairytalez.com » Blog » You Don't Know Jack: Dissecting One of the Most Popular Figures in Fairy Tales

If you read fairy tales often, or remember hearing a few as a child, you may recognize this famous literary character. A boy named Jack. He comes up in tales such as Jack and the Beanstalk, Jack and the Giant Killer and Lazy Jack. Fairy tales, folklore and even nursery rhymes are full of tales of a lad named Jack. You may have read his exploits, as his stories often appear in children’s story collections, but do you know Jack? Jack and the Beanstalk. Woodcut by Walter Crane.

Jack has appeared in stories since the 1800’s, and his popularity doesn’t wane. It seems audiences of all types love to read the stories of this clever boy who becomes a hero to his family and his neighbors.

“He was brisk and of a ready lively wit, so that nobody or nothing could worst him.”

How is Jack as a character? The characteristics of Jack are that he is clever, and sometimes he is naive. Jack is lucky in the end of the story, however, always winning, which would make him what they call a “trickster.” Jack is always a peasant or farmer’s son, and going out to seek his fortune. On his journey, he either meets a stranger or comes across a magical object, sometimes more than one, to help him, or he relies on his luck entirely (See Lazy Jack). No matter the circumstances that arise, Jack’s story always seems to end on a successful note.

Jack-the-Giant-Killer vs. Jack and the Beanstalk 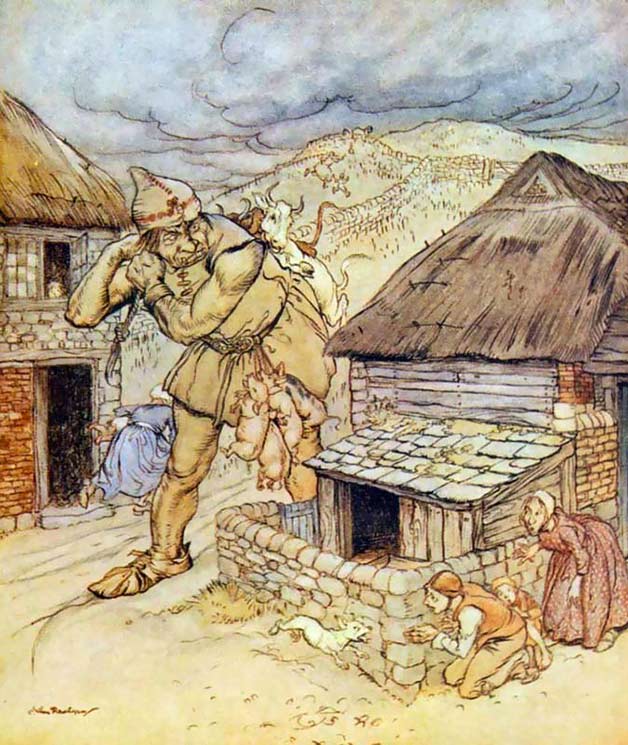 Many may be familiar with the story of Jack and the Beanstalk, and how Jack outwits the giant, but that’s not Jack’s first encounter with giants. Many readers are most familiar with Joseph Jacobs’ version, Jack the Giant Killer which features Jack as a Cornish farmer’s son. Cornwall is plagued by a giant who keeps stealing the farmers’ livestocks, and the townspeople are powerless to stop him. Jack wants the reward of the giant’s treasure if he kills the giant, so he hatches a plan to slay the town’s tormentor. He digs a pit, the giant stumbles in, and Jack kills him with one blow to the head. He goes on to kill other giants as word about his accomplishments spreads. The story is set during King Arthur’s time, and ends with him marrying a princess, living in joy and happiness thereon out.

Jack kills a giant also in Jack and the Beanstalk. Author Benjamin Tabart’s tale of Jack and the Beanstalk is the earliest known appearance of Jack, and is a moralizing tale that appeared in print in 1807. The tale was later rewritten in 1890 by Joseph Jacobs for his book English Fairy Tales, and his version is thought to be most like the oral versions. Jack lives with his poor mother, and when their cow runs out of milk, she sends him to the village to sell the animal. Jack instead trades the cow for a handful of magic beans, and when he returns home, Jack’s mother is so incensed, she throws the beans out of the window. Overnight a beanstalk grows, and Jack climbs it to come across a giant’s wife, who hides when her husband is near. In return, Jack steals gold, a goose that lays golden eggs, and a magic harp. He gets away the first two times, but on his third theft, the giant hears the harp and chases Jack down the beanstalk. Jack, upon landing back home, has his mother hand him an axe, and chops down the beanstalk, letting the duo live on the rest of their days in wealth.

Sometimes Jack doesn’t need magical items to win his fortune, but comes across it through sheer luck. Lazy Jack is a tale from England about a poor mother with a lazy son named Jack, who keeps ruining his payments from a day’s work. The first day, Monday, he brings home a penny for his trouble, only to lose it in a brook. The next day, he hires himself out to a cow-keeper, and gets a jar of milk for payment, yet, when he puts in his pocket as he was told to do with the penny, it spills everywhere. This pattern continues till Sunday, when a mute maiden spots him carrying a donkey on his back. The maiden is so delighted she laughs for the first time, and her father, a wealthy man, pledges his daughter for marriage, and Jack and his mother live happily the rest of their days. 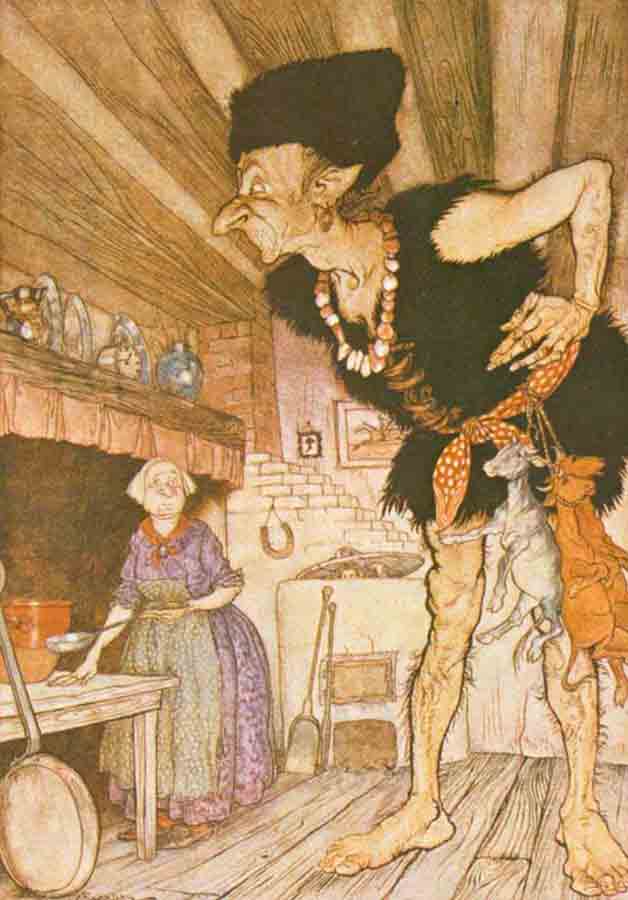 Jack and the Beanstalk. Illustrations by Arthur Rackham. Published in English Fairy Tales by Flora Annie Steel (1918), MacMillan and Company.

What’s in a Name?

Why are so many heroes named “Jack” in fairy tales? Research and history tells us that the name “Jack” originates from the name “John,” and that it was often used in the Middle Ages as slang for the word “man,” therefore it makes sense that the name Jack would be in Lang’s version. Jack was a generic symbol for the everyday man, a “John Doe” of fairy tales.

Did you know that Jack is also the name of a hedgehog? In Andrew Lang‘s story Jack My Hedgehog readers can learn the story of Jack, a hedgehog who rides astride a rooster as one would a horse, and who extracts promises from a king who fails to trick him. This Jack shares characteristics of the human Jack characters in fairy tales. This tale comes from Germany, and was published in Andrew Lang’s The Green Fairy Book. The name of the hedgehog in the story wasn’t always Jack, however, but Hans, because the story first published by the Grimm Brothers. It’s likely Lang either heard a version with the name Hans and changed it to be something more familiar, or he heard it with the name Jack, and wrote it down as thus.

Jack of All Tales

Appalachian folklore has its own “Jack,” inspired by the European fairy tale hero. The Appalachian “Jack Tales” have a farmboy-hero named Jack, who like his European-counterpart is brave and clever, triumphing in the end.

Want to read tales you’ve never read before, or revisit your old friend Jack? On Fairytalez.com, there are over 15 stories featuring a character named Jack!

Listen to Jack and the Beanstalk and other Jack tales on the Fairytalez Audio App now in the Google and Apple app stores.

One Response to You Don't Know Jack: Dissecting One of the Most Popular Figures in Fairy Tales